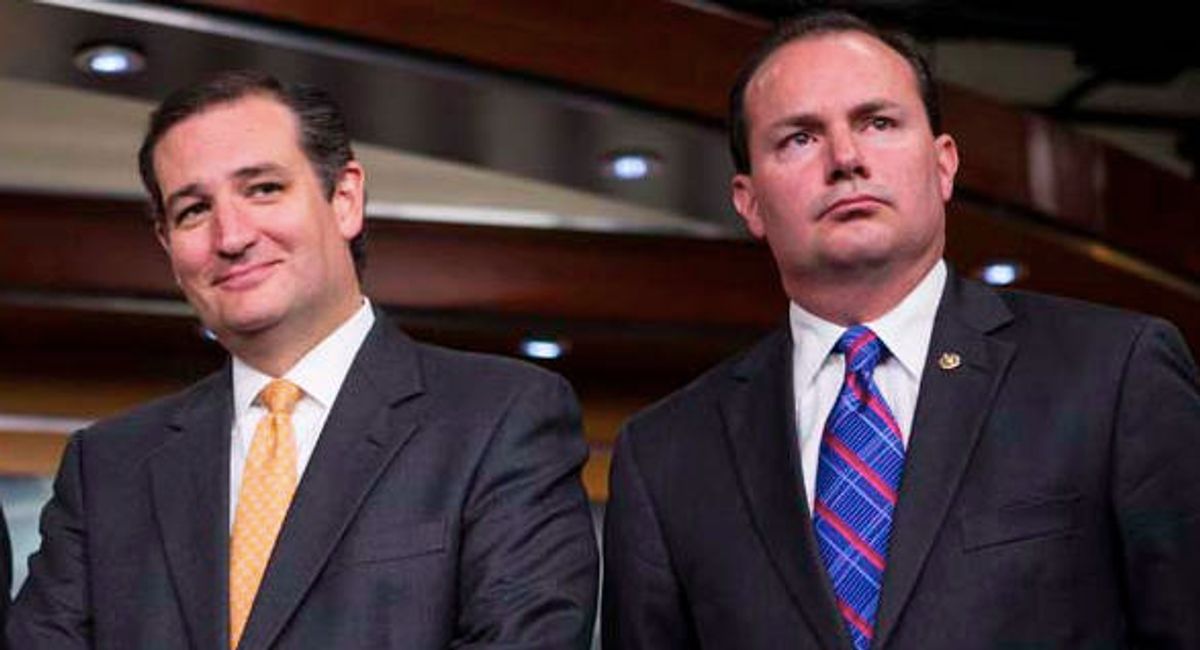 Donald Trump's summer of anti-immigration bluster hasn't only fueled his rise to the top of a crowded Republican presidential primary field. It's also helped spur new legislation in Congress aimed at cracking down on undocumented immigrants who commit crimes, after Trump kicked-off his surprise bid for the White House with controversial claims that Mexico was sending "criminals" and "rapists" into the U.S. illegally. Now, it appears as though this Trump-inspired push to pass new legislation targeting undocumented immigrants is causing tension amongst Senate Republicans, including within the ranks of the ultraconservative Tea Party faction.

According to Politico, Senate Republicans have responded to Trump's crusade against illegal immigration by introducing "Kate's Law," legislation named after Kate Steinle, the 32-year-old woman gunned down by an undocumented immigrant and repeat criminal offender in San Francisco last month. Steinle's death was exploited by Trump to serve as evidence for his claim that Mexican immigrants are criminals and reignited a outrage towards so-called sanctuary cities -- those municipalities that do not allow law enforcement to question an individual's immigration status. The aptly named "Donald Trump Act" passed in the House last month. That bill would block states and cities from receiving federal law enforcement funding if they have so-called sanctuary city practices in place. In the Senate, Ted Cruz introduced "Kate's Law," which would "enact a mandatory minimum prison sentence of five years for immigrants who try to re-enter the country illegally after being deported."

“It is legislation that ought to pass 100 to nothing,” Cruz told Politico. “Every senator, Republican and Democrat, should support keeping this nation safe from criminal illegal aliens.” But Cruz's efforts to push for mandatory minimums at a time when some of the only bipartisan efforts in Congress are centered on criminal justice reform and the repeal of such cumbersome federal mandates finds Cruz facing some unlikely opponents in the Senate.

As Politico notes, the "GOP rift" is "playing out within the Senate Judiciary Committee" pitting the Texas conservative against his fellow Tea Party buddy, Utah Sen. Mike Lee:

On one side are Republicans such as Cruz, who’s promoted his so-called Kate’s Law on the 2016 stage, powerful Judiciary Committee Chairman Chuck Grassley of Iowa, and Sen. Jeff Sessions of Alabama, who commands significant influence on immigration among hard-liners.

But on the opposing side are Senate Republicans such as Mike Lee of Utah — a close Cruz ally — and Jeff Flake of Arizona, who have both criticized mandatory minimums for certain crimes and are skittish about implementing such penalties for undocumented immigrants.

Lee has been a particular thorn for Republicans trying to write a bill in response to Steinle’s death, according to GOP sources. And on a committee with a narrow 11-9 majority, Republicans can’t afford to lose a single vote without picking up Democrats — an unlikely scenario on a proposal that’s imposing such tough penalties.

“That would not be something that I would be recommending,” Flake said of a five-year mandatory minimum for illegal re-entry offenses. “There may be some ways to accommodate some of those concerns, but not with mandatory minimums like that.”

Cruz, who recently had a friendly meeting with Trump -- his Republican presidential rival -- and was one of only a handful of Republican presidential candidates who refused to criticize Trump for his offensive characterization of undocumented immigrants, has a longstanding relationship with Sen. Lee, as the two often teamed up to stake the most conservative position on countless legislative battles from Obamacare to the 2013 government shutdown. But it now it appears that Cruz, fighting for the Republican presidential nomination, has taken common cause with flashy billionaire Trump over his longtime pal on this contentious issue:

Lee, who has aligned with liberal Democratic Sens. Patrick Leahy of Vermont and Dick Durbin of Illinois to ease mandatory minimums for certain crimes, is uncomfortable with such binding punishments for immigration offenses, and he’s threatening to oppose sanctuary cities legislation that includes mandatory minimums.

Bill O'Reilly has also shrewdly become a leading proponent for "Kate's Law," arguing that Steinle's death proved Trump had been right about the criminality of undocumented immigrants and openly advocating for the law's passage during his Fox News show. Political correctness, O'Reilly argued "is why Trump caught so much hell":

The Constitution demands that the federal government protect Americans from foreign intruders, demands it. Obviously, that responsibility’s not being met. And if you point that out, as Trump did, you’re a racist. A piñata for the open border crowd to bash. The fact that a felon could be deported five times and still be walking around San Francisco should shame Congress.