Rick Perry's campaign is broke: Fortunately his plutocrat-funded super PACs are not! 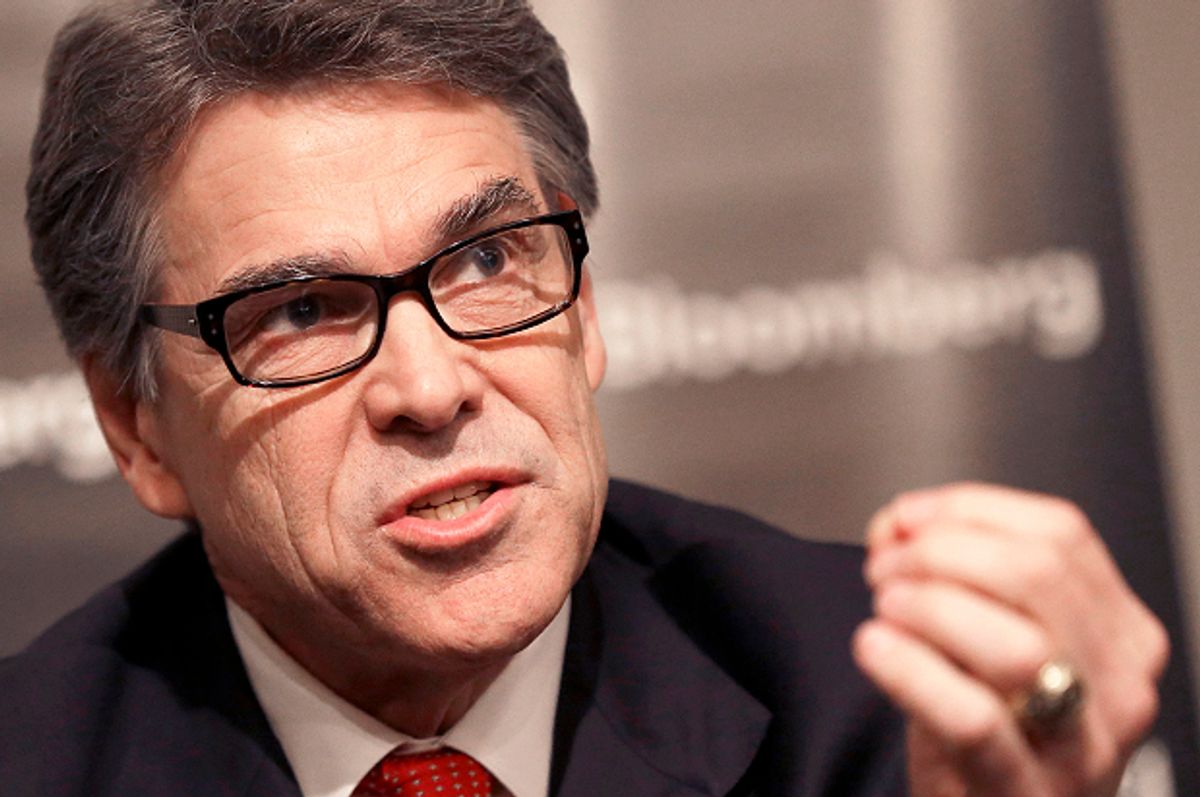 Rick Perry has given it his best over the past couple of months, but things aren't working out. The former Texas governor, remembered best nationally as the overfunded, cocky dimwit from the 2012 cycle, has been trying for the better part of the several years to remake himself as an intellectual elder statesman sporting sophisticated eyewear, so as to better perceive the truth.

The bar has been set so low for Perry this time around that his policy speeches, self-consciously overwrought, have been received in some quarters as "interesting." And prior to the first debate, Perry attempted to cast himself as the field's anti-Trump. A decent gamble, albeit one that didn't pay off: he fell out of the top ten in the last week ahead of the debate and was relegated to the kids' table debate, from which Carly Fiorina seized the only ticket out.

And now Rick Perry's campaign is broke. Perry for President raised only $1.1 million in the second quarter, while spending nearly $590,000 -- nearly $400,000 of which went to a single Texas consulting firm. Combine that with Perry's drop outside of the top ten, which spooked away much possibility of further donations anytime soon, and the general impression that Rick Perry doesn't have much of a shot at the GOP presidential nomination...

...Aaaaaaaaand what you've got is a suddenly volunteer-staffed campaign.

National Journal reported Monday that Perry's team in South Carolina was no longer being compensated by the campaign.

"Pay is only one reason people do this," Katon Dawson, Perry's South Carolina state director, told National Journal. "We'll be able to live off the land for a while."

But the problem isn't just limited to Perry's team in South Carolina. Jeff Miller, Perry's national campaign manager, told campaign staff on Friday that the only expenses moving forward would be for travel, a source close to Perry's campaign told CBS News.

Remember back in the day when presidential candidates who couldn't gain any traction actually dropped out of the presidential race? This was usually how it happened. You make an early push and it doesn't go anywhere, then you run out of money, then you drop out and go on with your life, giving speeches or writing books or selling mortgage-backed securities or forming a PAC that can pay you a salary. The first wave of drop-outs would come right about now in the process. A long-shot candidate would devote resources to making a splash at, say, the Iowa straw poll. If that didn't work, time to fold up shop. Now that the Iowa straw poll is gone, lack of entry into the primetime presidential debate seemed like the replacement as the midsummer field winnower.

That was back when things like a distinct lack of interest or financial support for a presidential campaign mattered. As long as the Perry campaign can trick its staffers into believing that working for Rick Perry indefinitely without pay is in their best career interest, this sucker can go on for quite a long time.

Because unlike the official campaign, the three super PACs supporting his candidacy have raked in some $17 million. Now most non-travel campaign duties will matriculate to those super PACs.

[Super PAC adviser Austin] Barbour said he anticipated after the campaign's financial filing last month that the super PACs would need to step up and do some of the responsibilities traditionally handled by campaigns, such as building a ground organization. He said they have begun building an extensive field program in Iowa, where the first-in-the-nation caucuses are critical to Perry's strategy.

So Perry's campaign will continue at least through the next debate and perhaps through Iowa and beyond.

Is this a good thing, democracy-wise? It's so easy to say yes. Thanks to super PACs, candidates can continue spreading their message and giving voters more time to consider them.

Such an inorganic system comes at a cost, though. You know that $17 million that Perry's super PACs have? Just three (3) very rich donors spotted $15.3 million of that. In other words, Rick Perry is only in this race because three (3) very rich people get a kick out of him, and now they own him. It is democracy presented by plutocrats. Maybe something like, say, a strong matching funds system would be a more democratic means of improving democracy. Or Rick Perry could just drop out because who cares.