The Oath Keepers come to Ferguson: Race, power and the not-so-secret history of white men with guns 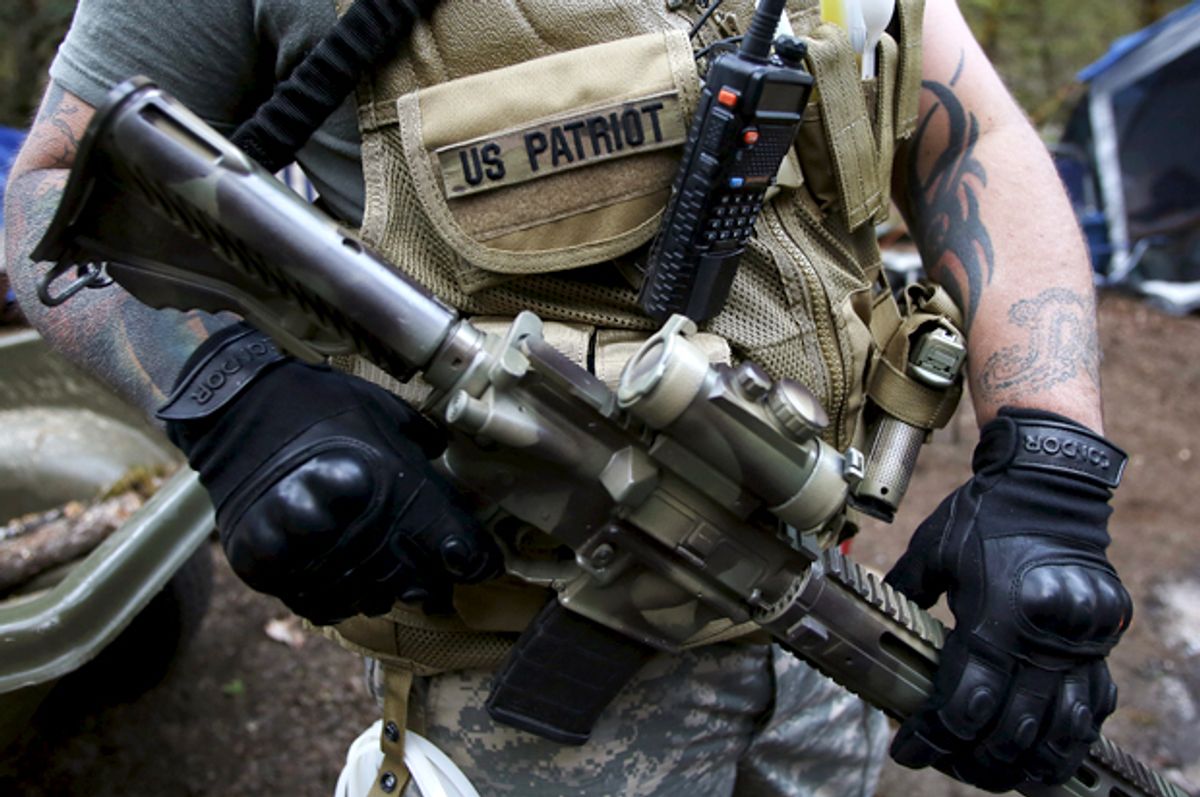 According to multiple media reports, a group of at least four or five heavily armed white men showed up on the streets of Ferguson, Missouri, overnight on Tuesday, following the street unrest around the one-year anniversary of the killing of Mike Brown and Sunday’s shooting of another man who allegedly fired on police. The men told reporters they were members of the Oath Keepers, a militia group that describes itself as nonpartisan supporters of the United States Constitution and says it includes many current and former U.S. military personnel, police officers and first responders. One of the men said they had come to Ferguson to protect correspondents for Infowars, Alex Jones’ conspiracy-oriented site – from whom or what was not clear – although Infowars subsequently denied having asked for armed backup.

As we say these days, the optics of this murky and bizarre little media moment were troubling, to say the least. White dudes with bulletproof vests and assault rifles – weapons “that aren’t available at Walmart or Cabela’s,” as a St. Louis Post Dispatch reporter put it last year – and an unmistakable good ol’ boy vibe, patrolling an African-American neighborhood. Reuters reporter Scott Malone wrote that the men’s presence “added a disquieting element” to Ferguson, an unusual intrusion of opinion or analysis in a straight news story. St. Louis County police chief Jon Belmar, who has struggled against the perception that his department is racially insensitive or worse, and has repeatedly responded to Ferguson protests with military-style force, described the Oath Keepers’ presence as “unnecessary and inflammatory.”

What interests me about the Oath Keepers’ return to Ferguson – a similar cadre was spotted there last November – is less the event itself than the radically different perceptions it provokes. There is the way the Oath Keepers have been perceived by mainstream media and local officials, the way the Oath Keepers and their supporters apparently perceive their actions and, behind or beneath those things, the cultural and historical gulf between those perceptions. Seen on their own, these guys are an insignificant blip in the Ferguson news. But if we can move past a simplistic depiction of them as scary racist yahoos, I suspect they represent one aspect of a resistance drama playing out beneath the surface of American life.

Anyone with any minimal understanding of American history and culture should be able to see the problem here – but then, one central aspect of the Infowars and/or militia movement mind-set is a profoundly paranoid reading of American history. Whatever their conscious intentions may be, these guys are channeling two interwoven and inextricable strands of deep American mythology: The icon of the white man with a gun, defending his property and his womenfolk, and the long and ugly history of American vigilante violence. On one hand you have John Wayne in “Stagecoach” and Clint Eastwood in “Dirty Harry” (and for that matter Bradley Cooper in “American Sniper”); on the other, you have the Ku Klux Klan bringing down Reconstruction with its reign of terror, lynch mobs hanging black men in the town square for offenses against the Jim Crow moral code, and Robert De Niro as Travis Bickle, seeking to cleanse the Manhattan streets with blood in “Taxi Driver.”

To put it mildly, these phenomena look radically different from opposing sides of the racial divide. In African-American history, the white man with a gun is not a nurturing or reassuring figure, or a symbol of liberty. There may yet be living people in Ferguson who can remember the last recorded lynching in Missouri, which was in 1942. Virtually the entire black community has heard those tales of terror passed down from their parents and grandparents. While African-American activism and resistance has taken many forms at many times (and I claim no special expertise) I think we can say without fear of contradiction that the mistrust of central authority and the federal government epitomized by the militia movement is not widely shared by black people.

Going back to Ulysses S. Grant’s attempts to crush the Klan and enfranchise black voters, African-Americans have repeatedly demanded that Washington step in to enforce the law and protect their rights. The fact that every president between Grant and Dwight Eisenhower declined to do so was precisely what allowed the white men with guns across the South to enforce a social order of violent repression. So it is hardly surprising if many African-American residents of Ferguson view this contingent of camo-clad, heavily strapped red-state interlopers with a mixture of emotions running the gamut from “no” to “oh hell, no.”

Which seems empirically more likely, given everything that has ever happened in the last three centuries of American history: That the Oath Keepers have showed up in Ferguson to protect citizens and property owners of all races (as they claim), or that they’re there to express their kinship and solidarity with racist cowboy cops like Darren Wilson and his ilk? When Paul Joseph Watson of Infowars responds with an outraged post lamenting the “demonization campaign” directed against the Oath Keepers by mainstream media and prominent #BlackLivesMatter activists, one may reasonably inquire: Dude, WTF? Pro tip: If you genuinely want to build alliances between your fringe political movement and the African-American community, sending heavily armed white men into a black neighborhood might not be the best opening gambit.

I’m inclined, believe it or not, to take Watson and Infowars and Oath Keepers founder Stewart Rhodes at their word about not being old-school racists or white supremacists. (Even the Southern Poverty Law Center, although it describes the Oath Keepers in dire terms, does not call them racist.) In fact, I suspect that the Oath Keepers’ Ferguson road trip really was exactly that kind of attempt at cross-racial outreach, however deluded and misguided in execution. That’s the only explanation that makes sense of this peculiar little news moment, given that the path of least resistance for any right-wing resistance movement is always to stir up racial animosity. Look at those videos of Oath Keepers discussing the Second Amendment and related political issues with Ferguson residents, and the sincerity is obvious -- complete with a reference to the Black Panthers, the 1960s pioneers of Second Amendment activism.

That interpretation might seem unduly generous in light of the comments section for Watson’s article, which was immediately overrun by scores of vile racist trolls and elaborate New World Order theorists, as per usual. But what we glimpse here, just for an instant, is an internal conflict on the anti-government extreme right about whether to try to shed its troglodyte racial past and seek alliances with other radicalized and disenfranchised groups who feel excluded from the political system. I'm not suggesting that the militia movement is likely to win many converts in urban black America. But even this misconceived attempt is one of many indications that we’re in a period of extreme political dysfunction and unease, when people on the ideological margins begin to regard each other in a new light. There is hope there, as well as great danger.