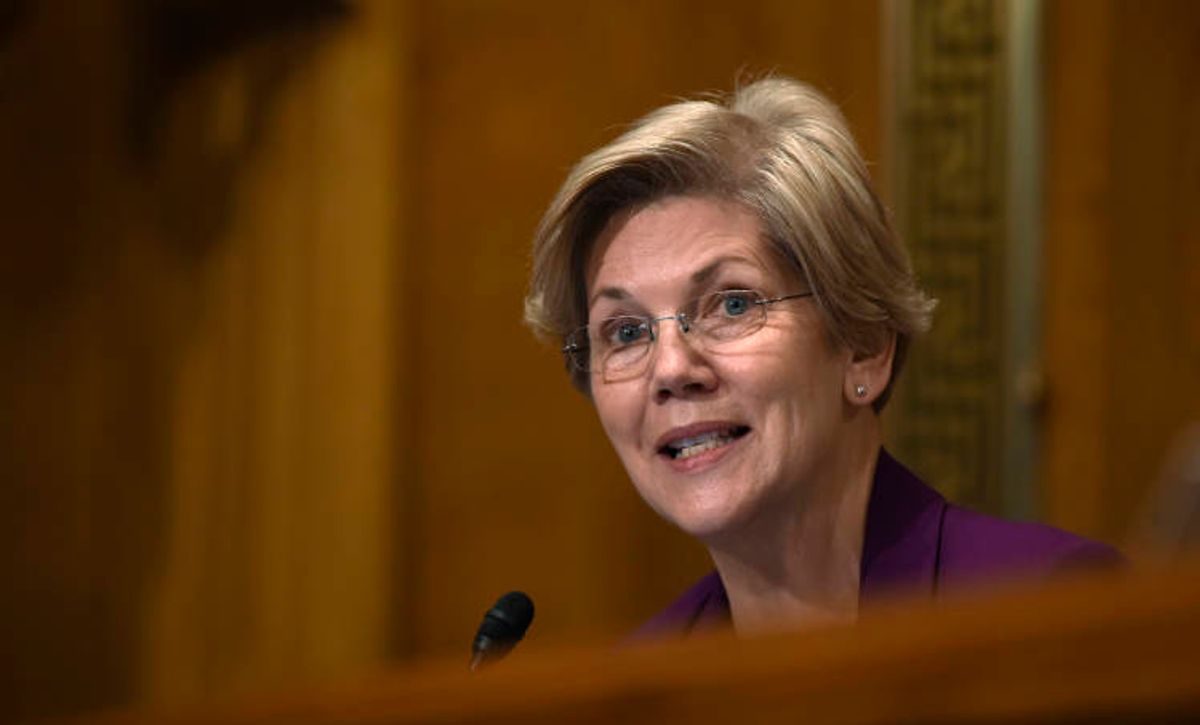 FILE - In this Jan. 21, 2015 file photo, Sen. Elizabeth Warren, D-Mass. speaks on Capitol Hill in Washington. The rich arent taxed enough and the middle-class is taxed too much. As for your taxes, you probably think theyre too high as well. Those are the results of a new Associated Press-GfK poll, which found that most Americans support President Barack Obamas proposal to raise investment taxes on high-income families. The findings echo the populist messages of Sens. Elizabeth Warren and Bernie Sanders, two liberals being courted by the progressive wing of the Democratic Party to run for president in 2016. The findings also add weight to Obamas new push to raise taxes on the rich and use some of the revenue to lower taxes on the middle class. (AP Photo/Susan Walsh, File) (AP/Susan Walsh)
--

The dream of the '90s is alive among a modest collection of House Democrats. The whittled-down number of House Democrats comprising the New Democrat coalition is pushing back against Nancy Pelosi and the scatterbrained leftists she keeps under her thumb to "force the Democratic Caucus to the center" as a means of retaking control of the chamber, Politico reports.

Moderates are tired of being overshadowed in a party where liberals have long dominated the agenda, even as Democrats slipped further into the House minority after the 2014 midterm elections. They’ve accused the White House and party leaders of focusing too much on niche economic issues like the minimum wage and pay equity — policies, moderates argue, that turn off suburban voters Democrats need if they want to take back the House. And top Democratic leaders have released them to break with the party’s liberal base, in many cases an acknowledgement that many moderates come from tightly contested districts.

It's clear that whatever House Democrats have been doing the last few cycles has not been working. The chief piece of evidence here would be that Democrats do not hold the House. Democrats owe it to their voters and the rank-and-file donors whom the DCCC milks dry every two years not to be content with this sort of thing and come up with a real plan for increasing their ranks. Even though New Democrats are terrible, they, and anyone else who's got an idea, should feel welcome to put forth their suggestions for how to adjust the party's policies and messaging. The Democratic Party's failure in the House is more of a crisis than too many Democratic commentators seem to let on, and the party should field any and all suggestions thrown its way.

The floor's all yours, New Democrats. What policy ideas would sharpen House Democrats' appeal to moderate voters?

• Trade deals. "When Obama needed support from his own party to pass landmark trade legislation, he turned to the New Democrat Coalition. The group mustered just enough votes — 28 in total — to clear fast-track trade authority through Congress, despite opposition from the party’s left, including Democratic Leader Nancy Pelosi of California."

• "Reforming" Dodd-Frank. "Connecticut Rep. Jim Himes is one of the most outspoken advocates for reforming the Dodd-Frank financial regulations bill." [Jim Himes seems like a nice fellow and has a good-by-congressmen-standards Twitter account. He is also owned by the banks.]

• Corporate tax reform. "Lawmakers in the coalition repeatedly stressed that reevaluating how the U.S. taxes corporate profits from overseas operations could be an area of compromise between the moderate Democrats and Republicans."

OK OK, I think I see the problem here. This article and the quotes within it frame New Democrats' proposal as geared toward appealing to voters. You know, voters! Humans who visit polling stations and cast their ballots for either Democratic or Republican candidates.

But these policy proposals are quite obviously ones that are not geared directly toward winning these voters back to the Democratic ticket. Can we be real here? Moderate voters -- again, the actual humans who do the voting and have moderate political beliefs -- did not forsake a Democratic House majority because they weren't working hard enough to grease the skids for opaque free trade deals, or because they weren't slashing corporate tax rates fast enough. They weren't punishing Democrats for taking it too hard on the banks in Dodd-Frank or for insisting on static scoring of legislation. The policies that the New Democrats are championing here would not seem, at all, to cast the party image in a new, more positive light among the "suburban voters Democrats need if they want to take back the House." (And here I'd thought that it was white working-class voters, not "suburban voters," that the Democrats needed to stave off midterm-cycle death? It seems that the centrist politicians themselves also get confused about which amorphous demographic to use as a prop to convince liberals to stop talking about the "divisive" concerns of women and black people.)

New Democrats' policy agenda makes much more sense once we recognize that these appeals aren't targeted toward voters so much as they are to donors in the worlds of business and high finance. The list of policies above sounds a lot like a 60-second pitch that a DCCC finance director might deliver to the political wing of the U.S. Chamber of Commerce.

Fortunately we have New Democratic Rep. Gerry Connolly right there in the Politico piece to confirm that corporate donors are the real project here.

Rep. Gerry Connolly (D-Va.) said the coalition — which announced Wednesday it had reached $1 million in fundraising through its super PAC at the quickest rate ever — is also refocusing on business groups that have traditionally been Republican allies. He said Democrats have an opportunity to reach new voters and donors with the congressional fight over the reauthorization of the Export-Import Bank and immigration. [...]

The "pro-business community" has been well aware that there are enough free-trade Democrats in the House Democratic caucus to move whatever they need to move, just as there are enough to tuck whatever Dodd-Frank-gutting riders they want into appropriations bills. The party has been working formally with the "pro-business community" for years to pass comprehensive immigration reform and more recently to reauthorize the Ex-Im Bank. Everyone is open to tax reform for corporations and individuals, though specifics are a matter of contentious debate. And indeed, a solid majority of these proposals have gone nowhere because of the right-wing of the Republican Party.

That's because the Republican Party is still the party of big business and deregulation. These New Democrats are offering little technocratic tweaks to regulations here and there, while Republicans are offering total obliteration of all regulations. Kissing Wall Street's ass more is probably not the solution that Democrats need to retake the House of Representatives. (Not that there are really any great options. The sad truth is that House Democrats probably need a crappy Republican president in office in order to make serious congressional gains.)