The company has no tolerance for any denial but its own 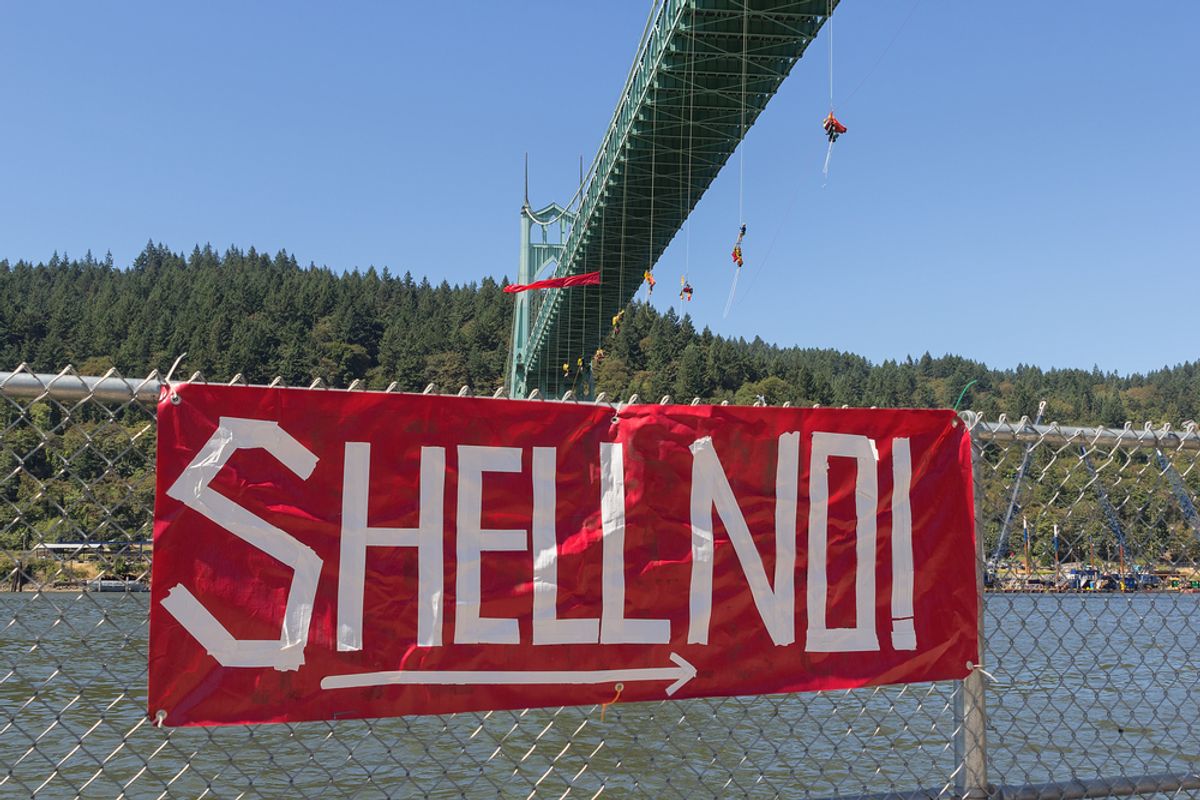 Overcoming delays caused by protestors and armed with lessons (hopefully) learned from past mistakes, Shell is officially ready to start drilling for oil in the Arctic, the company informed the U.S. government Tuesday.

And, in one of the least mysteriously timed PR moves ever made, Shell announced days earlier that it plans to sever ties with the American Legislative Exchange Council (ALEC), the free-market lobbying group whose abject climate denial, the company said in a statement, is “clearly inconsistent" with its own position on the issue.

Got that? Shell has no tolerance for people who deny the scientific reality of climate change, but it has no problem going to extreme lengths to access the stuff that's scientifically understood to contribute to climate change, and which, moreover, scientists say must remain in the ground if the world's to have any hope of limiting warming to the agreed-upon 2 degrees Celsius -- a limit many believe we're already on track to blow past.

The company's insistence, in its statement about its decision to cut ties with ALEC, that “we have long recognized both the importance of the climate challenge and the critical role energy has in determining quality of life for people across the world" meanwhile sounds like PR-speak for "we have long recognized the importance of fighting climate change but have been loathe to do anything about it, and we're pretty unwilling to get behind the idea of bringing cheaper, more readily available renewable energy to the developing world."

As Nick Surgey, the director of research at the Center for Media and Democracy, put it in an interview with InsideClimate News: "I think it would be impossible for anybody to see [Shell] having left ALEC as anything other than a press stunt."

Even those who are celebrating Shell's gall in calling ALEC exactly what it is -- instead of citing non-specific reasons for its departure -- aren't exactly convinced that the oil giant just suddenly saw the light. "We are really happy that Shell has finally come around to acknowledging the inconsistency of ALEC’s position and its own state position on climate change,” commented Angela Anderson, director of the Climate and Energy Program at the Union of Concerned Scientists. However, she continued, "We are certainly anxious to engage with Shell on… what does it really mean for a fossil fuel company to be a responsible actor on climate change."

Echoing Surgey, it's safe to say you won't find many people who'd agree that drilling for more fossil fuels in an area that's only open to such exploration because climate change made it so could be called "responsible." It's better described by former BP chief executive, Lord Browne, who told the BBC that Shell's plan is risky -- not just to the environment, but to the company's bottom line, as well as to its reputation. If the company's truly concerned about climate change, after all, it's natural to wonder why it would go so far out of its way to tap even more fossil fuels.

The reality of climate change, and its own contributions to the problem, isn't the only thing Shell's in denial about. The Arctic is an inherently risky environment for drilling, and according to a report compiled by the National Research Council (NRC), it's an area where -- try as Shell might to insist it won't happen -- we're entirely unprepared to deal with the eventuality of an oil spill.

“It’s really tough to talk about effective clean up," concurred Pat Pourchot, who until recently worked with Shell on behalf of the Department of the Interior, in an interview with the Guardian. "I don’t think anybody should have illusions."