Tinder's epic meltdown: Outraged over being named the vehicle for "psychosexual obesity," the hook-up app embodies the worst traits of its brand 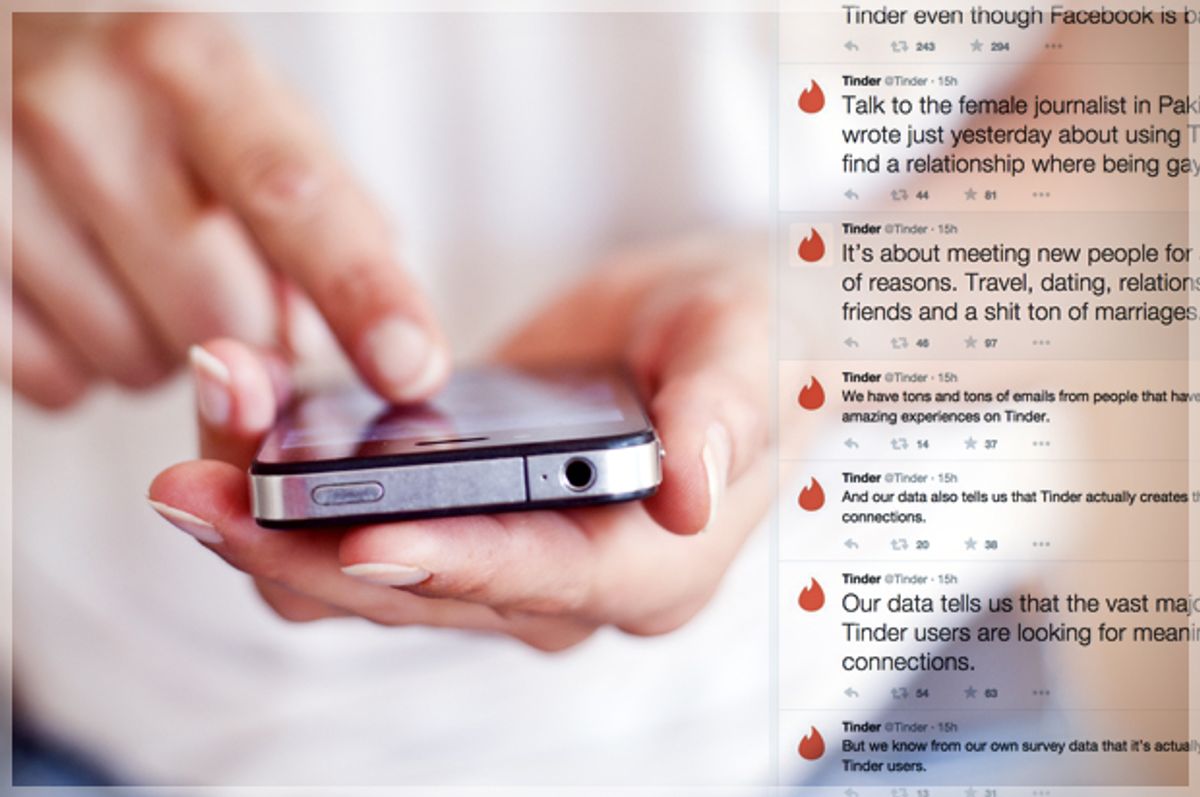 You really out-Tindered yourself there, Tinder. But whether your meltdown Tuesday night was a sincerely epic case of butthurt or just a clever attention-getting ruse, either way, it sure sealed your rep as the ultimate online destination for rejection rage.

The popular dating app features prominently in a story by Nancy Jo Sales in the September Vanity Fair on "Tinder and the Dawn of the “Dating Apocalypse." In it, Sales describes a scene populated with sexually restless millennials, arranging hookups as easily as pizza deliveries — but with a jaded, competitive edge. "You can’t be stuck in one lane," one conquest-obsessed dude explains. "There’s always something better."

But while Tinder plays a prominent role in Sales' story, it functions mostly as a prop — the means by which her booty call obsessives coordinate their liaisons. What the narrative really strives to be is, in many ways, the latest variation of a classic sexual trend piece, a contemporary peep into the Tribal Rites of the New Saturday Night. And Sales, much to her credit, serves up this view of "hit it and quit it" culture with a skeptical, inquisitive eye. She lets the bros who brag of how many women they've slept with in the past week have their say, but she also talks to women who report these guys aren't really delivering, and "how it’s not uncommon for their hookups to lose their erections." She talks to an expert who observes, "People are gorging. That’s why it’s not intimate. You could call it a kind of psychosexual obesity."

It's not what one would describe as an especially cheerful or romantic picture, but it's not Sales' duty to deliver one. She's talking about a particular phenomenon within a particular culture, one currently dealing with the consequences of "pussy affluenza."

But Tinder did not like being portrayed as "like ordering Seamless, but you’re ordering a person." So Tinder took to Twitter to do pretty much what a certain segment of the gentleman popular of Tinder is quite notorious for — it took a woman's less than wholehearted enthusiasm as an excuse for a very silly tantrum. In a series of over two dozen petulant tweets, the company's social media account complained that "The Tinder Generation is real. Our users are creating it. But it’s not at all what you portray it to be," because Tinder is also "about meeting new people for all kinds of reasons. Travel, dating, relationships, friends and a shit ton of marriages…. Talk to our many users in China and North Korea who find a way to meet people on Tinder even though Facebook is banned." It moaned that "If you want to try to tear us down with one-sided journalism, well, that’s your prerogative…. But it’s not going to dissuade us from building something that is changing the world. #GenerationTinder."

Naturally, plenty of people on Twitter found this all hilarious. Jay Smooth suggested that "Tinder's social media manager currently outside Vanity Fair office blasting 'You Oughta Know' out of big boombox," while Darth came to the "scary realization that the tinder person tweeting about tinder is also on tinder." And Sales herself just laughed, "My article isn't even about @Tinder lol."

You'd think that a company that just a year ago settled a pretty gross sexual harassment suit would have a little more chill. But Buzzfeed's Claudia Koerner claimed Tuesday that "I in fact got a pitch from a PR person that Tinder was about to tweet storm, and I should watch for it."

A Tinder rep told Wired early Wednesday that "We have a passionate team that truly believes in Tinder. While reading a recent Vanity Fair article about today’s dating culture, we were saddened to see that the article didn’t touch upon the positive experiences that the majority of our users encounter daily. Our intention was to highlight the many statistics and amazing stories that are sometimes left unpublished, and, in doing so, we overreacted."

Is that because it wasn't a feature about those "positive experiences" and "amazing stories"? See, the thing about journalism is that it's not like Seamless, or Tinder. You don't order it your specifications and then give it a bad review if it's not to your liking. Sales had no obligation to write the story that Tinder would have preferred she craft, because she doesn't work for Tinder. Vanity Fair doesn't exist to please Tinder. And the fact that the company would orchestrate such a ridiculous, outraged response may not be a sign of affluenza, but it sure speaks to the entitlement that's such a hallmark of the brand.