Ferguson's dark, twisted lesson: What police crackdowns & "Oath Keepers" reveal on the anniversary of a tragedy

A year after Michael Brown died, Americans are starting to forget what happened. But we must never forget 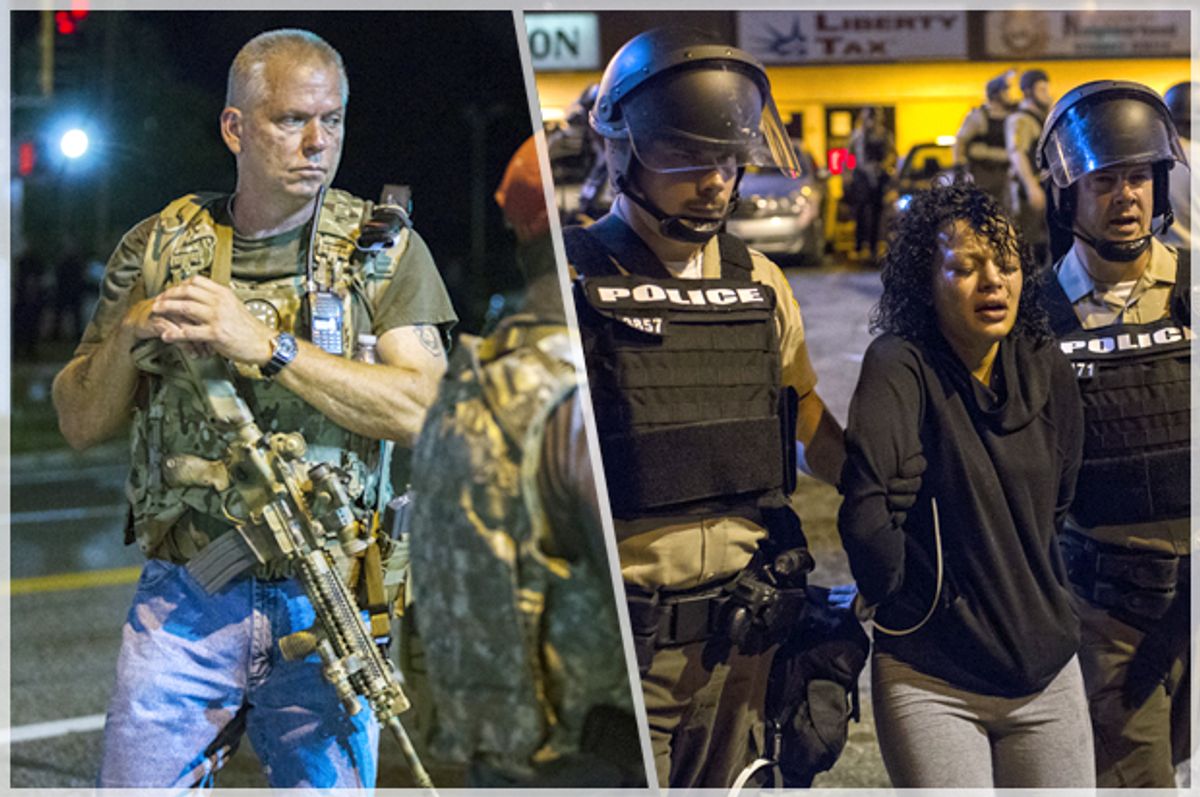 On Friday, the 363rd day after the killing of Michael Brown, Jr., I visited his memorial in the Canfield neighborhood of Ferguson, Mo., where his bullet-riddled body lay for four and a half hours last August 9. Having spent the day speaking at and in participating in a conference at a local church about the role of scholarship and the church in the Movement for Black Lives, I had not readied myself to encounter Canfield for the second time. But as my comrades and I got out of the car, and peered a few feet away at Mike Brown’s memorial, lined with teddy bears and marked on either end by two orange traffic cones, the devastation settled into my stomach yet again. The tears started dripping faster than I could catch them.

I may never understand why the story of this kid pulls at my heartstrings the way it does. None of us may ever understand. The vast majority of local activists who have spent their year staring down police officers, taking milk baths to treat tear gas, being arrested, and advocating for change in their community never knew Michael Brown. But he is family. His fate is linked to ours. If it could happen to him, it could happen to any of us.

Over the weekend, the public memorials and remembrances for Mike remained peaceful until Sunday evening when some unknown group of people began shooting, seemingly in a conflict unrelated to the protests. Police also claim that one of Michael Brown’s classmates, an 18 year old young man named Tyrone Harris, opened fire on four police officers in plain clothes, necessitating that they shoot him. He remains in critical condition. I remain dubious of their account of events.

These incidents allegedly incited the police to once again bring out their riot gear, their armored vehicles and their tear gas, which they used on protestors lining the streets on West Florissant and Canfield Drive. Thus, the last few days have become an eerie repeat of how we spent August 2014, following Twitter for news reports of the terrible violence and fear gripping people in St. Louis. Mainstream media coverage has stayed true to form, offering accounts of police who have been forced into violence because of violent, angry protestors.

On both Sunday and Monday, I spent the day checking in with local activists and other friends and supporters who have become family over the last 12 months. From them I heard a different story, about police giving orders to disperse while flanking protestors in on both sides making it nearly impossible for them to leave. I watched video that a good friend recorded hastily in retreat, where I heard the sounds of Black people running from police, screaming in distress, trying to avoid tear gas canisters, trying to make sure they made it out with everyone they came with.

This is what state violence against peaceful protestors looks like. And the broad masses of the American populace have not yet become discontent enough with these violations of the rights of American citizens to rise up and do anything about it. Too many people are content to dismiss these protests as the acts of angry, illogical, and violent youth.

Someone once told me that the root of all anger is fear. I’m not big on sweeping platitudes, but there is a visceral fear that animates the anger of those of us pushing our country to change. We fear for our lives. We fear for the lives of those we love. And we have been told, in every way possible, that our lives are not worthy of care or protection. We have every right to be afraid. We have every right to be angry. Our country wants us to fear it.

On Monday evening, five armed white men, a militia group calling themselves the “Oath Keepers,” showed up to the Ferguson protests declaring their intent to keep the streets safe. Described by the Southern Poverty Law Center as a fiercely antigovernment, militaristic group, these militia men claimed to be there to protect the protestors.

Yes, the police chief called them “unnecessary and inflammatory,” but this is qualitatively different than viewing them as an active and dangerous threat. Yet the throwing of water bottles by protestors is a “threat” frequently met with tear gas. There is no universe in which a group of Black men dressed in fatigues and armed with assault weapons could show up to patrol the police and protect protestors without swift and significant reprisal.

This week’s crude repetition of events that horrified us last August are a cautionary tale in what happens when America refuses to learn the lessons of the past. For the last year, I have been thinking through how white people have arrived at this particular moment, a moment where Black people are being slaughtered with impunity while white Americans pretend that things are fine.

When I was a teenager, I remember being a part of a multiracial generation of youth who looked with horror upon the sins of white people in the early and mid-20th century. My white friends often spoke of their grandparents and even their parents’ racism and seemed not to want to repeat those mistakes. In fact, frequently, they did not understand how white people in the past had engaged in such atrocities. Back then, even I did not believe that we could turn back time. I did not believe state-sanctioned lynchings would still occur. Lynchings and denials of civil rights were so clearly inhumane.

But I am struck by the fact that many of the police officers and vigilantes, who have killed Mike Brown and Sam DuBose and Walter Scott and the Charleston 9, are younger than I am. They were born in the late 1980s and the early 1990s. Michael Brown’s mother is my age. And here we are again in an era of lynchings and the systematic denial of civil rights.

What kind of forgetting makes that possible? What kinds of things do you have to believe about yourself to see one group subjected to heinous acts of state violence and conclude that they did something to deserve it? How are you any different, then, than the people who raised you?

Back at Mike Brown’s memorial, I cried, in part, because it had been one full year later, and the memorial was still there. The objects of tribute had changed. Regularly, the memorial is dismantled. But members of the community keep coming back. They keep choosing to remember. They keep choosing to bring an offering. The place where Mike Brown’s body lay is holy ground. I have not forgotten. But I went back because I needed to remember.

Forgetting makes such atrocity possible. Forgetting will cause you to retread the same ground again and again. White people’s willful forgetting of their long history of violent, anti-black racial atrocity dooms them to repeat the harms of the past. For Black people that means our salvation is in remembering. Remembering what white people are capable of. Remembering how much our country does not love us. Remembering our slain. Remembering that their broken bodies and their spilled blood compel us to keep on fighting.