GOP hawks are all the same: Jeb Bush is hardly the only candidate with an Iraq war problem

Jeb's rivals, like Christie, love criticizing the Iraq war. But it's not like they've learned anything, either 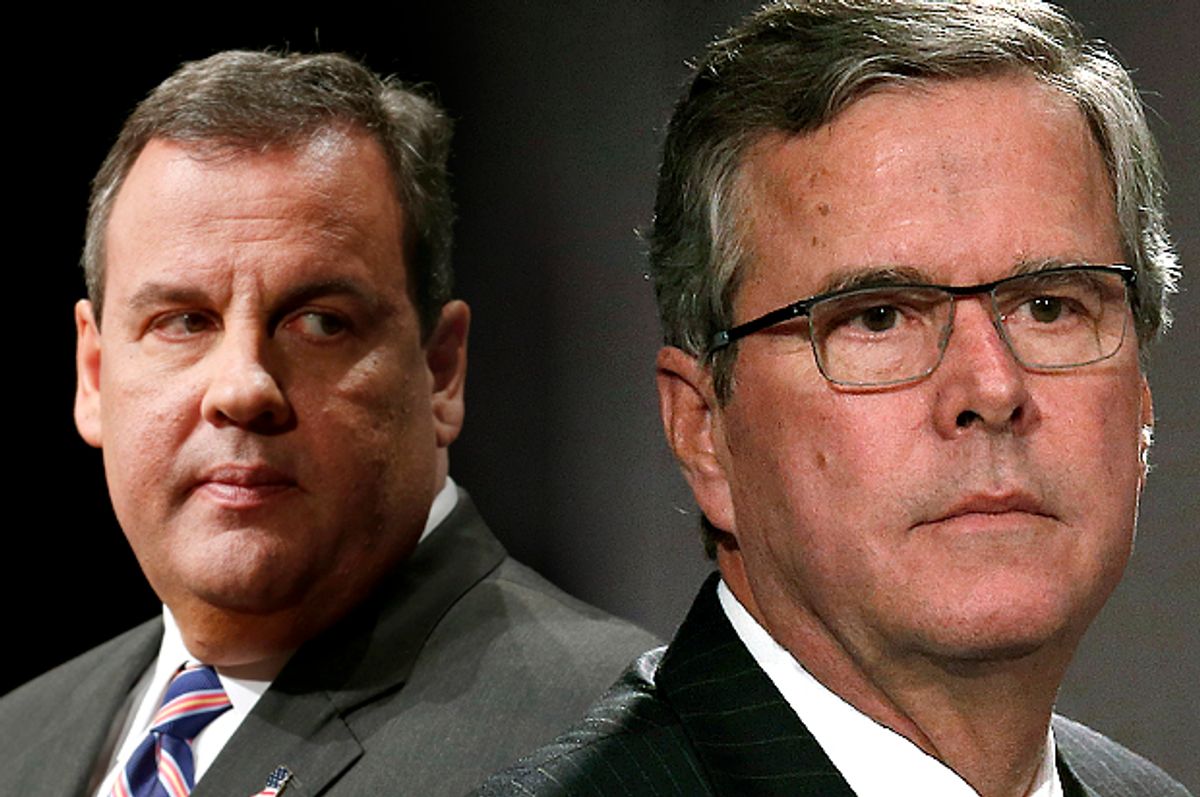 Jeb Bush gave a foreign policy speech earlier this week in which he suggested that the country "Iraq" was in absolutely fine, freedom-loving shape before President Obama returned control of the country to his beloved terrorists. This interpretation of what has happened to Iraq over the last dozen years is a bit... lacking, let's say. Just as most of the words spilling out of Jeb Bush's mouth about Iraq have been.

Whenever Jeb Bush brings up Iraq and the calamities that have befallen it, his rivals pounce. Recall that Bush's inability to deliver a clear answer on whether he would have authorized the 2003 invasion prompted most other Republican candidates to declare that they would not have authorized the invasion. Hawkish politicians' wildly militaristic instincts fall by the wayside when the guy ahead of them in the race displays an early, central vulnerability.

When Bush delved into his fairly skewed history of Iraq again this week, Chris Christie took notice. Christie is one of the dozen or so candidates that needs to do whatever he can to get any attention. And so he went on Laura Ingraham's radio show and criticized Bush for trying to "relitigate" the Iraq war in a piece of unsolicited political consultation.

"There's no reason to go back and try to re-litigate this. It's bad decision-making by Gov. Bush, but I'm not running his campaign," Christie said. "It makes no sense for us as a party. We know what the answer to that is."

"Common sense will tell you that this is not a fight that we want to have again," Christie added.

Christie is right that it's probably not in Jeb Bush's long-term interest to declare the campaign in Iraq a success under his brother, a victory that the Obama administration squandered. Obviously.

But when hawks like Christie go after Bush for this, it's hard to not to crack up. Aside from this one issue, candidates like Christie have not shown, in any way, that they learned from the Bush administration's overreaction to 9/11 at home and abroad.

Christie's schtick requires him to play tough-love daddy on everything. His domestic platform hinges on making sharp structural cuts to Social Security and Medicare. Don't like it, tough. He's also been telling pot smokers in Colorado and Washington to enjoy smoking their legal weed while they can, because when he's president, he'll enforce superseding federal prohibition on marijuana. Don't like it, tough.

This persona extends to national security. He's branded himself as a tough-talking hawk who has little need for nuance or critical thinking when it comes to counter-terrorism effort.

Consider the shouting match over post-9/11 surveillance programs that he got into with Rand Paul during last week's debate.

“I don’t trust [President] Obama with our records,” the Kentucky lawmaker added. “I know you gave him a big hug, and if you want to give him a big hug again, you go right ahead.”

Christie blasted Paul for taking an academic tone on the issue, contrasting that to his time in the field pursuing terrorists.

“When you’re sitting in a subcommittee just blowing hot air about this, you can say things like this,” Christie charged.

“You know the hugs that I remember: the hugs that I gave to the people who lost their families on Sept. 11, and those had nothing to do with politics, unlike what you’re doing,” he added, referring to Paul having temporarily killed a portion of the Patriot Act earlier this year, which his presidential campaign promoted heavily.

Aaaaand thanks to Chris Christie, we're right back in the early-mid-2000s and all the bullshit that came with that time period. Someone comes along and says that the Patriot Act, and the generous way that surveillance agencies interpret it, was perhaps a little broad, and the hawk resorts to a full I remember that clear day in September... reminiscence. It's vile and straight out of the textbook of Jeb's brother's administration.

Jeb Bush obviously hasn't demonstrated that he's either able or willing to internalize his brother's foreign policy mistakes. The other candidates may call him out on it, but there's no evidence that they've learned anything either.