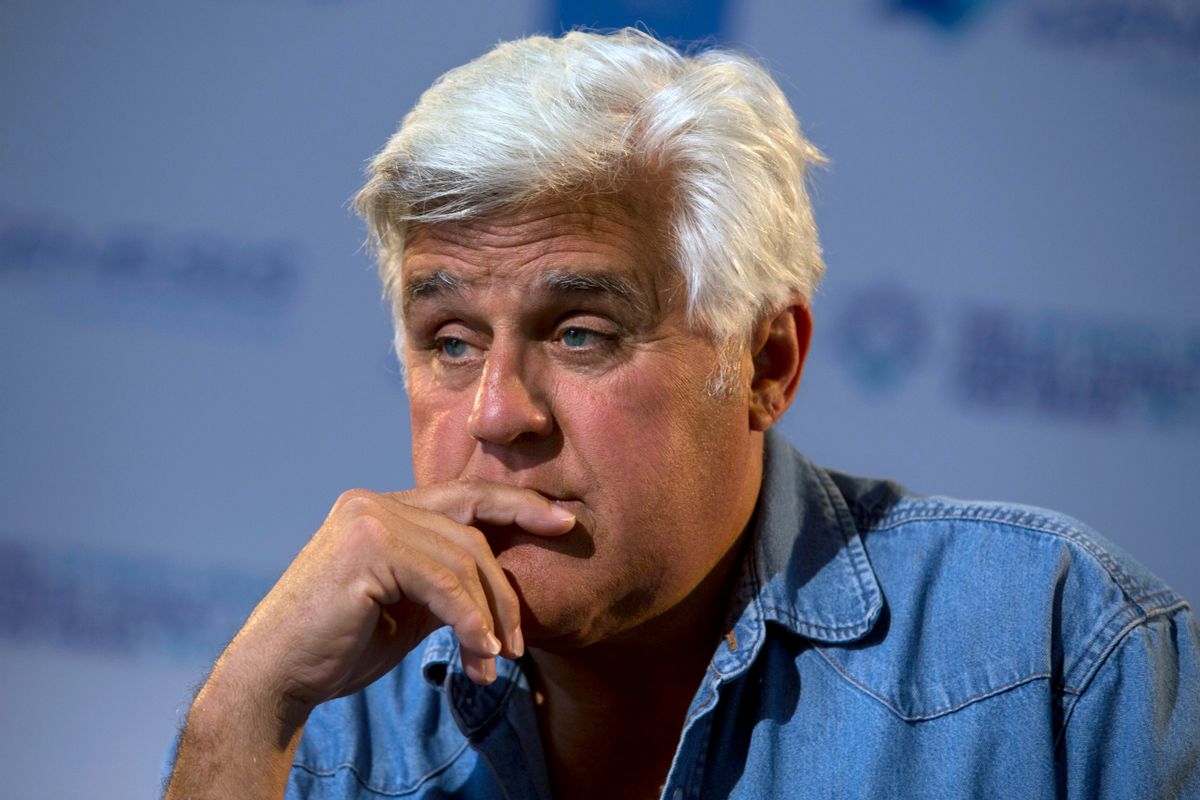 Jay Leno is back in the spotlight promoting his new car show “Jay Leno’s Garage!” and as usual, the erstwhile villain of late night comedy came armed with plenty of digs at his fellow comics and a hearty helping of dad jokes (at TCA, he joked that the Jeb/Trump race was like "the tortoise and the bad hare." Zing!).

In particular, in an interview with TV Insider, Leno took time to praise Seth Meyers, Jimmy Fallon and Stephen Colbert (“a truly nice guy and decent human being”) before taking aim at Jimmy Kimmel, who has been a vicious and relentless critic of Leno over the years.

"The most [important] element you can have in doing a late night show is kindness," Leno said. "Because the show makes you arrogant. I think that’s Jimmy Kimmel’s problem. I think he’s a talented guy, I think he’s funny. But he has a mean streak, and it comes across. He does this thing where he takes Halloween candy from kids and the kids cry. What am I missing here? It is funny I guess, but it’s mean-based. I think that’s why he’s not higher in the ratings.”

Never one to pass up an opportunity to take a jab at an old rival, Leno went on to explain why a Letterman/Leno reunion never took place before Letterman left "The Late Show." "When I did my last show, I asked Dave to send a 10-second tape," he explained. "No, they didn’t want to do it. All right, so why would I go all the way to New York? It’s just quid pro quo."

"I went to New York and did the Oprah [Super Bowl] commercial for Dave," he continued. "And that’s not anything against Dave, he’s just an odd duck. Kind of socially awkward, I don’t know. We go back a long time, we have a lot of history. Not bad history. We started out together, I think we both complemented each other when we started out. I didn’t know what Dave’s attitude would be, so we just didn’t do it."

While Leno may have harsh words for Letterman and Kimmel, oddly, he still managed to summon up some sympathy for (alleged) serial rapist Bill Cosby — though he did not defend him — when addressing the scandal at his TCA panel.

“Bill Cosby is a wonderful comedian and has always been a nice man, I feel bad about this as anybody does,” said Leno, “but I don’t know how he comes out of it.” He then said his advice to Cosby would be to "admit what went on.”

Leno also criticized how the media has handled Cosby’s accusers, comparing it to the molestation scandal in the Catholic church.

"Fifty women come forward and (the media) calls them liars, and says ‘Oh, you waited 40 years.’ Men waited 50 years to say that a priest touched them and got $7 million. How can we believe them and not the women? It seems terribly sexist to me,” said Leno “It seems unfair and I’m surprised no one has made that analogy.”