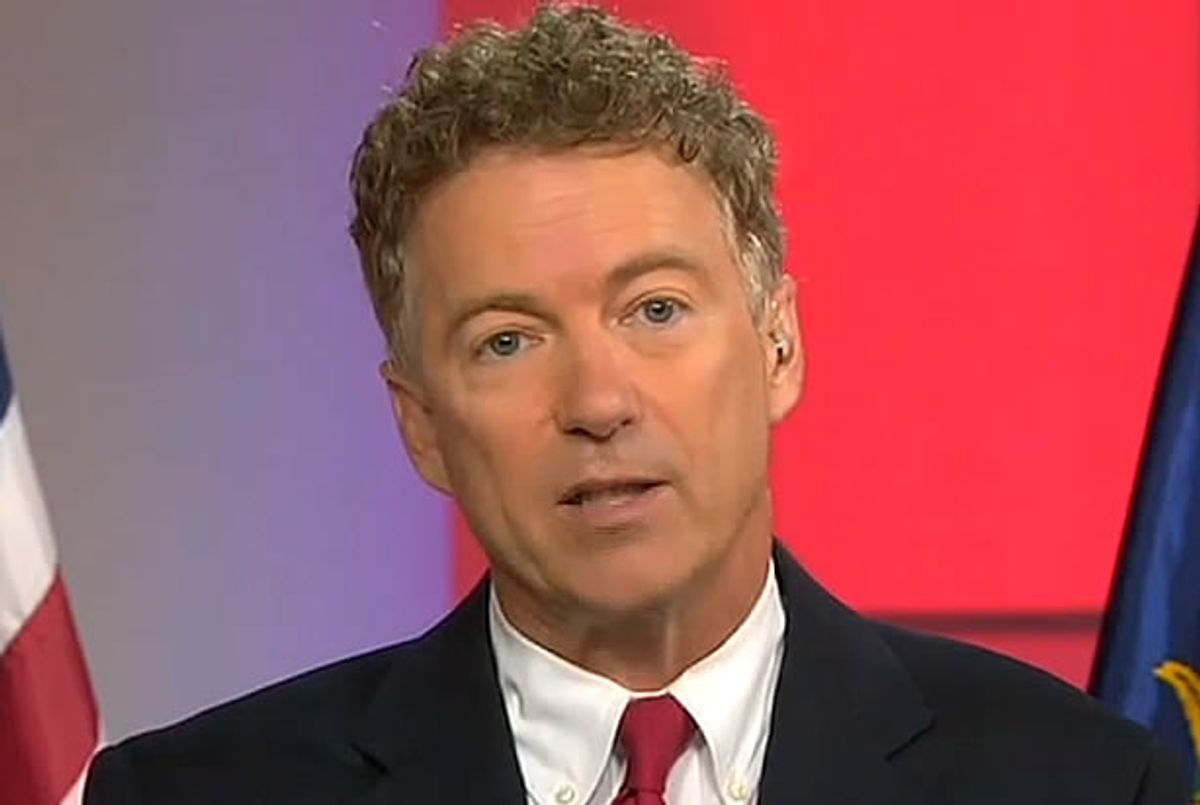 Now that it appears as though the struggling campaign of former Texas governor Rick Perry will fail to take off, another Republican presidential candidate has stepped into the role of lead Donald Trump attack dog. Kentucky Sen. Rand Paul finds himself in the center of yet another Republican-on-Republican assault with the GOP frontrunner.

On Wednesday, the Paul campaign released an ad attacking Trump for his past liberal positions, highlighting the New York billionaire's previous support for Hillary Clinton and universal health care using the real estate mogul's own words. The ad blasted Trump as "a fake conservative" and claimed Paul was "a real reformer who will defeat the Washington Machine and unleash the American dream."

Later that day, Paul mocked Trump during a town hall campaign stop in New Hampshire, CNN reported. "We have now people up there who say such profound things as, 'You're stupid, you're fired, you're a pig, you look terrible, you only have half a brain,' and then when you respond with an argument it's like 'You're stupid,'" Paul said.

Trump, never one to hold back, was quick to respond to Paul's latest schtick, comparing himself to Ronald Reagan in a lengthy statement to the Washington Post:

Rand Paul is doing so poorly in the polls he has to revert to old footage of me discussing positions I no longer hold. As a world-class businessman, who built one of the great companies with some of the most iconic real estate assets in the world, it was my obligation to my family, my company, my employees and myself to maintain a strong relationship with all politicians whether Republican or Democrat. I did that and I did that well.

Unless you are a piece of unyielding granite, over the years positions evolve as they have in my case. Ronald Reagan, as an example, was a Democrat with a liberal bent who became a conservative Republican.

Senator Paul does not mention that after trouncing him in golf I made a significant donation to the eye center with which he is affiliated.

I feel sorry for the great people of Kentucky who are being used as a back up to Senator Paul’s hopeless attempt to become President of the United States--- weak on the military, Israel, the Vets and many other issues. Senator Paul has no chance of wining the nomination and the people of Kentucky should not allow him the privilege of remaining their Senator.  Rand should save his lobbyist’s and special interest money and just go quietly home.

Rand’s campaign is a total mess, and as a matter of fact, I didn’t know he had anybody left in his campaign to make commercials who are not currently under indictment!

Did you catch that last burn, a reference to the recent indictment of Jesse Benton, longtime Paul ally and head of a pro-Paul super PAC? In response to The Donald calling Paul a lousy golfer who is using his constituents as a mere "back up," the Paul campaign attempted to out Reagan Trump, writing in a statement to the Post that "Paul is the one following in the footsteps of Reagan, setting the intellectual agenda for a conservative movement of change" before going on to thank Trump for his "generosity" and donation:

Donald Trump couldn't set the intellectual conservative agenda of anything, not even the tiniest rooms, never mind a country. He is devoid of ideas other than he likes the idea of power and getting attention for foolish statements and bluster.

While he appreciates Donald's golf skills, I will note that [the game] was on his home course that he plays often. And he does sincerely appreciate Donald's generosity to the eye clinic. In fact he has mentioned it often, including in his op-ed and speeches this weekend.