Kristen McQueary "can relate, metaphorically, to residents climbing onto their roof, begging for help" 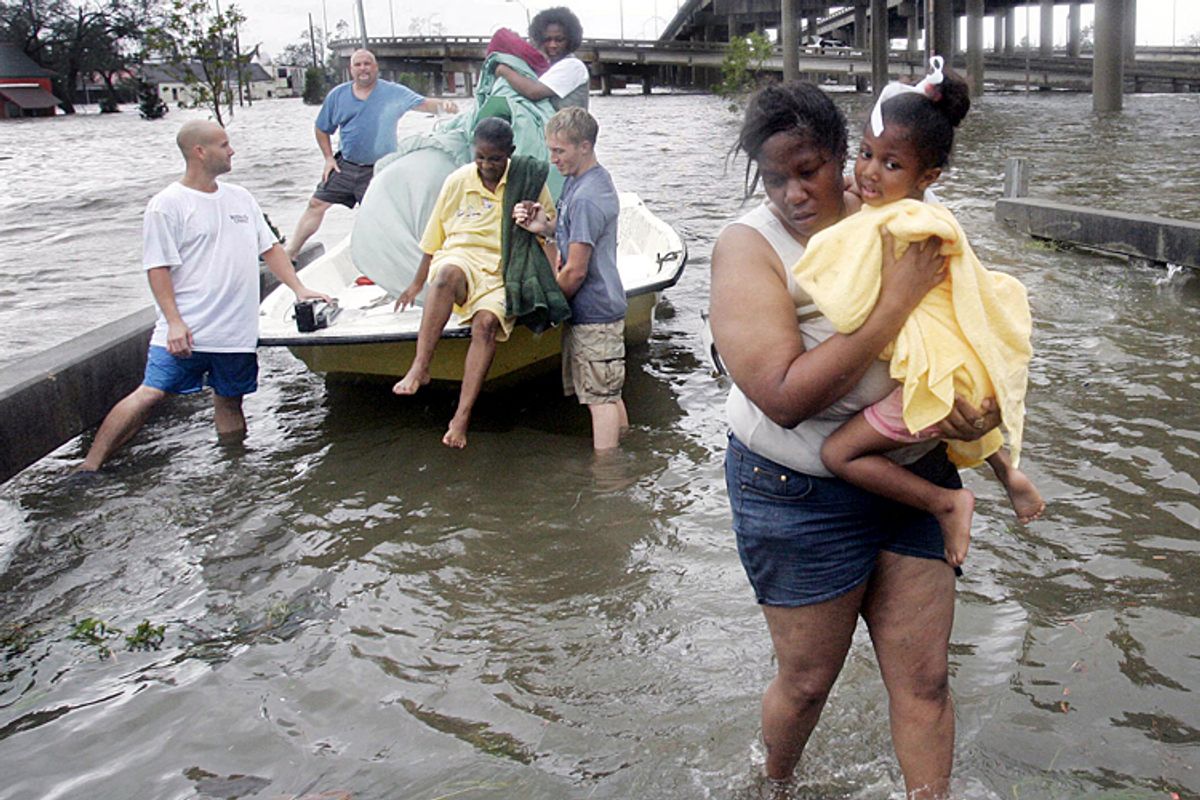 Shante Gruld carries Janeka Garner, 5, to safety after they were rescued from their flooded home by boat in New Orleans, Aug. 29, 2005. (AP/Eric Gay)
--

The Chicago Tribune's Kristen McQueary wrote an op-ed in which she claimed that the operative emotion one should feel as we approach the tenth anniversary of Katrina isn't despair over the thousands of easily preventable deaths, nor anguish at the lives and communities torn about, but envy because one of the greatest natural disasters in American history allowed the city to bust the teachers' unions and overhaul city hall.

"Hurricane Katrina gave a great American city a rebirth," she wrote, conveniently ignoring the fact that 1,833 -- most of whom were poor and people of color -- paid for this civic rebirth with their lives. The toxic logic of white privilege on display here is staggering, as she characterizes the very real destruction of historical communities, as well as entire cultures, as "what it took to hit the reset button."

Or, as she -- to the justified consternation of many -- tweeted:

McQueary provided a laundry list of conservative goals that the city met after it had been battered so badly it barely function as a city anymore: "[a] new mayor slashed the city budget, forced unpaid furloughs, cut positions, detonated labor contracts[,]" making "New Orleans' City Hall leaner and more efficient." It never occurred to her that if your ideology requires thousands dead and hundreds of thousands displaced in order to be enacted, the problem likely isn't the city -- it's your ideology.

Putting aside that McQueary's vision of Chicago as a mansion on the hill requires the eradication of many of its African-American residents, the most disturbing aspect of her editorial is that she imagines herself to be one of those residents, stranded on a rooftop waving this very op-ed like a bed-sheet in the hopes of being rescued.

"I can relate, metaphorically, to the residents of New Orleans climbing onto their rooftops and begging for help and waving their arms and lurching toward rescue helicopters." She did, literally, write that. But she went one step further, arguing that her plight is more desperate than those in New Orleans because "here, no one responds to the SOS messages painted boldly in the sky."

Besides the fact that that final line makes absolutely no sense -- New Orleans residents weren't hiring biplanes to alert authorities as to their whereabouts via skywriting -- the problem with McQueary's editorial is that it exists, which points to a failure of judgment on her part, as well as that of every member of the editorial board who read and signed off on her egregious "hot take."

McQueary has since tried to walk back that heat:

But she's unlikely to find any sympathetic ears for her vile thoughts. Before setting them to paper, she apparently made lovely caprese salad, and suffice it to say, the world would be a demonstrably better place if she'd just eaten it and called it day instead of insulting the memory of a defiantly undrowned and its dead.