Donald Trump's "Meet The Press" farce: A seething ball of hurt feelings and egomania pretending to be a serious politician 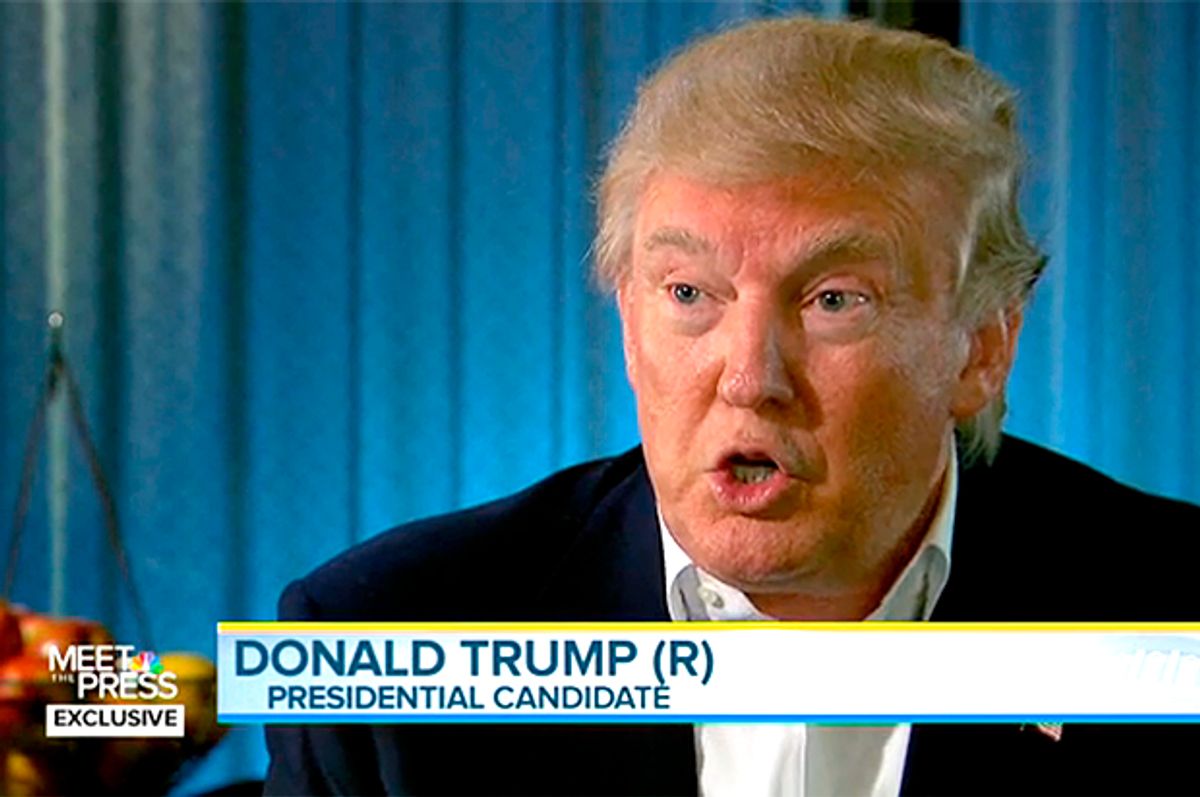 Watching Chuck Todd interview Donald Trump on Sunday's "Meet the Press," one got the feeling that the media is moving through some Bizzaro World version of the five stages of grief. Like a widow coping with the loss of a spouse, the press response to Trump's stubborn staying power has had several phases. People have tried denial. Maybe he'll go away! They've tried anger. How dare he go after John McCain! They've tried mockery. (And here, just insert anything he's ever said, really.)

None of the above have put the dent in Trump's candidacy that the media establishment is so clearly looking for. Perhaps sensing this, Todd tried a different tack in his interview—that of the "serious policy conversation." I put that in quotes because, though they're always banging on about the level of intellectual rigor they display, the Sunday shows are usually content to pepper candidates with substance-free questions about their campaign tactics and electability issues before turning to policy in the last two minutes. It's only when they're out for blood and want to expose someone who they think shouldn't be in their club that they don the cloak of journalistic sobriety and make a stab at getting down into the weeds.

Now, Trump is a somewhat special case, in that the media is so clearly torn about him. The networks want him in the club for entertainment and ratings purposes, but they also sort of want to push him to the exits, so everyone's in a bit of a bind. But Todd nevertheless rolled up his sleeves and pretended that Donald Trump is a man who you can have a "serious policy conversation" with. He even promised the viewers that the chat was "less about personality and more about substance."

You won't be stunned to find that Trump wore the mantle of an engaged, reasoned candidate about as well as a rhino wears a miniskirt. He told Todd that he gets his ideas on military policy from "watch[ing] the shows" like "Meet the Press" (which probably explains why those ideas are so rotten) and his plan to curb undocumented immigration was essentially to say that people "have to go." But no matter. The Trump candidacy has never been about actual policies—supporters of his have been filmed on camera saying that they don't care about any facts as they relate to him—so trying to pin him down on his various stances is a rather futile act. Beyond the obvious ratings ploys, big-time journalists like to say that these sorts of interviews "reveal" something about the candidates even if we learn nothing, but really, what more is there to learn about Donald Trump? He's not so much Teflon as he is that caked-in piece of grime on the kitchen counter that we know we'll never get out. He is Stephen Colbert's prophecy come to life, truthiness personified, a seething ball of hurt feelings and egomania posing as a presidential campaign. Todd might as well have talked to a cardboard cutout of Trump for all the good it did him.

Look, I'm not saying that nobody should interview Trump. The guy's a big deal. He's turning the Republican race on its head at the moment. So fine. Interview him! All good. But I have probably taken years off my life being frustrated that the journalistic elite reserves its most relentless side for the flotsam of politics like Trump while rolling out the red carpet for people in actual positions of authority. To take just one example: the Sunday shows that are now climbing all over each other to see who can "take on" Donald Trump the most are the same Sunday shows that routinely exclude all but a tiny amount of anti-war voices whenever the United States decides it wants to bomb yet another country. Given the choice, I know where I'd want Chuck Todd to really train his fire.