Huckabee, Trump and the "life matters" lie: Every "life is precious" — except a woman's or a girl's 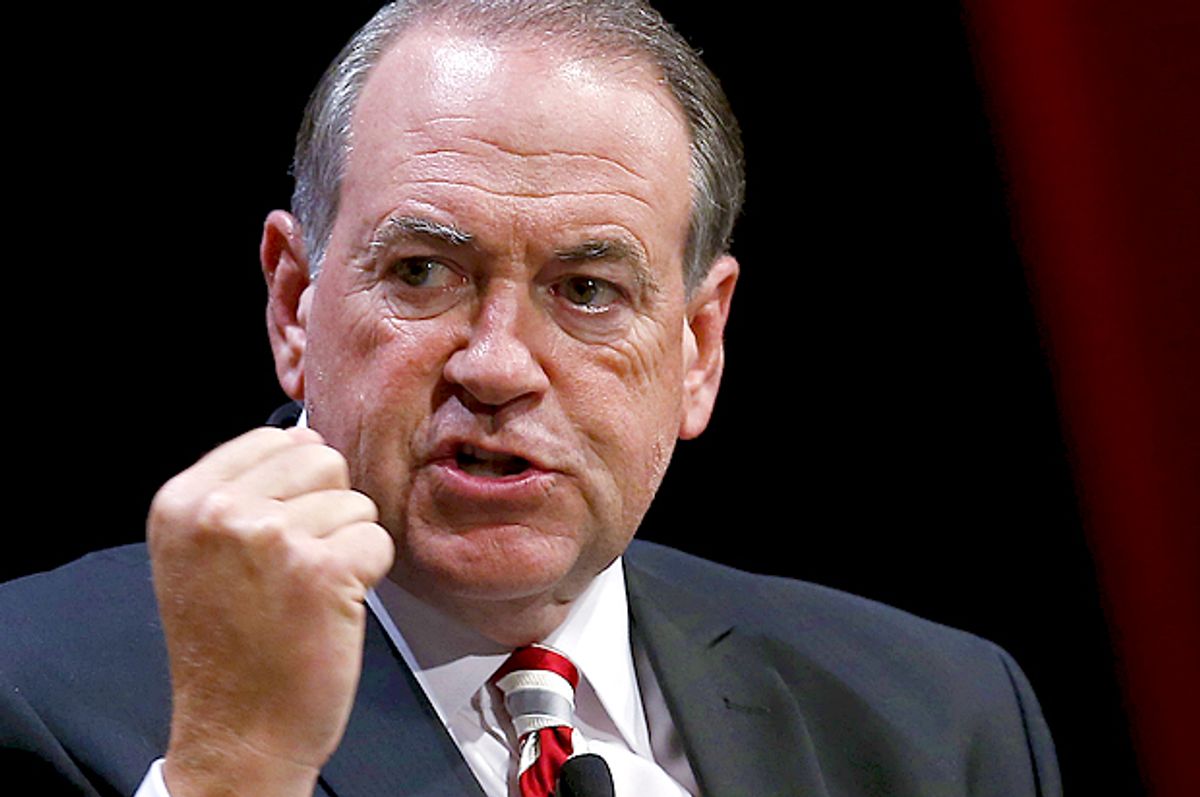 It's almost a relief when these guys are so transparent. When they just come out and admit they're not even trying to cater to any other demographic but the most extreme and vile. So, kudos to you, Mike Huckabee, and you too, Donald Trump. You're horrendous, but at least when it comes to abortion, you're frank.

Speaking with CNN Sunday, flailing Republican presidential candidate Huckabee, currently commanding a mere 6 percent of his party's voter support, stood firm on his unconditional opposition to abortion — even in the case of child rape. Last week in Paraguay, an 11 year-old girl who says she was sexually assaulted by her stepfather at age 10 gave birth to a baby daughter via cesarean. The stepfather is currently awaiting trial. The girl had pleaded for an abortion, but Paraguay, like many nations, has strict laws around the procedure and denied her request. Amnesty International issued a statement Thursday saying that the fact "she did not die does not excuse the human rights violations she suffered at the hands of the Paraguayan authorities."

Huckabee told Dana Bash on "State of the Union," "Let nobody be misled — a 10 year-old being raped is horrible," a reasonable enough statement. He then asked, "But does it solve a problem by taking the life of an innocent child?" It was an echo of Indiana Republican Richard Mourdock's famed 2012 assertion that "Life is that gift from God. And even when life begins in that horrible situation of rape, that it is something that God intended to happen."

Huckabee then cited the story of a friend and colleague who had been conceived via rape, and whose mother "went to three doctors in 1943, begged doctors to abort the baby, none of them would do it. They all refused." But see, it's a happy ending because his friend now has an organization that helps people. I've got to say, not everybody could tell a story like that, one that involves a rape victim going from doctor to doctor begging to not have to give birth to her rapist's baby and being repeatedly refused, and not seem to have an iota of empathy for her experience. Not everybody could go on national television and suggest that what America needs right now, women's health-wise, is to be more like Texas in 1943, or Paraguay, right now. Hahahahaha I can't.

Huckabee went on to say that "There are two victims. One is the child; the other is that birth mother who often will go through extraordinary guilt years later when she begins to think through what happened -- with the baby, with her…. I just come down on the side that life is precious; every life has worth and value. I don't think we discount the intrinsic worth of any human being, and I don't know where else to go with it than just to be consistent and say, if life matters, and that's a person, then every life matters."

Speaking with Chuck Todd on "Meet the Press" this weekend, Donald Trump, meanwhile, took a more merciful view, allowing for abortion "if the mother is close to death." He stressed, "If the mother will die and we’re going to know that. The problem with [saying health] is, what, you have a cold and you’re having an abortion?"

I love it when men try to explain how they should be the arbiters of what constitutes a reasonable justification for obtaining an abortion, or how a woman is supposed to feel emotionally afterward. Of course, every situation is different, but it's worth noting that a study out of the University of California San Francisco just last month found that while nearly half of all women seeking abortions consider the choice "difficult or very difficult," a whopping 95 percent report they do not regret their decision. So maybe you don't need to be our feelings nanny after all, Mike Huckabee.

And the majority of women who have abortions are already mothers. They understand how pregnancy works. They know what they want, and what's right for them. As Chilean journalist Paola Dragnic explained in a fearless essay for Buzzfeed about her own torturous and life-threatening first pregnancy earlier this summer, no woman deserves to be "tortured by a deaf government that makes us suffer in the name of a false morality."

We are still a deeply divided nation on the subject of reproductive choice. But as a May Gallup poll reveals, Americans are increasingly identifying themselves as pro choice. They understand that the notion that women have to be protected from their own independent decision-making is invasive and cruel. Perhaps they're concerned that the US has a maternal death rate that rivals those of Afghanistan and Chad, which suggests we're not exactly bringing it, reproductive health-wise. Maybe they also disagree not only with the idea that a female should be forced to carry her rapist's baby, but that — as in a majority of states — the rapist can then receive visitation and custody rights.

There is nothing life affirming or beautiful about forcing females to have babies, regardless of whether they've been raped, regardless of whether their health is in danger, regardless of any reason that tells her that the state knows better than she does. And when guys like Mike Huckabee have the nerve to say, "Every life matters," their callous disregard for the lives of women and girls — and even 11 year-old, sexually abused ones — could not be more blatant or enraging.