Meet Lil Dicky, the latest rich white bro with a dubious message to rap his way to the top of the charts 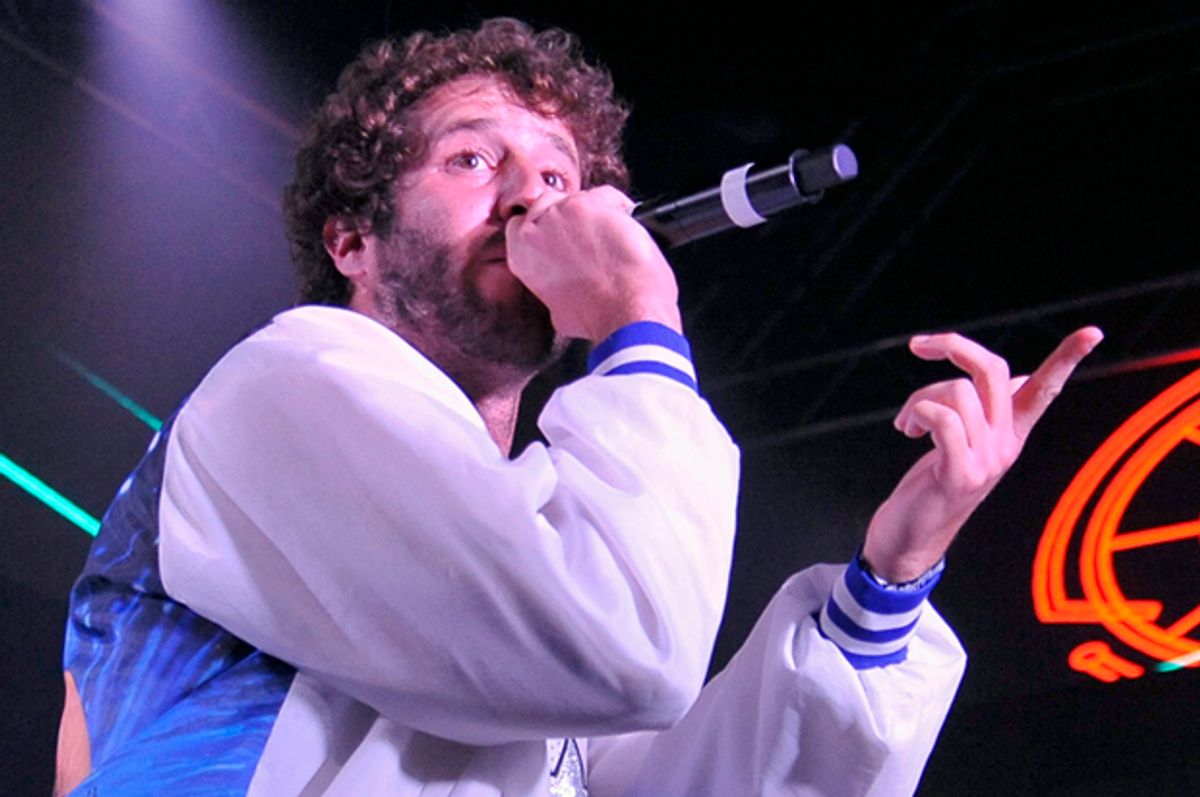 Perhaps the most offensive rhyme in recent hip-hop history can be found on the debut album from Lil Dicky, a white, upper-middle-class rapper whose new record, Professional Rapper, somehow tops Billboard’s rap chart this week. On the song “Bruh,” Lil Dicky (born David Burd) delivers this unconscionably repugnant lyric after a series of bars about “hoes” and “bitches”:

The line first appeared in a free-style Dicky delivered in June on a popular nationally syndicated hip hop show. And, judging by the response from the show's hosts (queued up here), one would've assumed that Dicky would drop the line from the record. As you'll notice, it gets really uncomfortable in the studio -- well, uncomfortable for everyone but Dicky, who seemed to revel in the offense and get a charge of energy.

Thus, rather than shuddering at his depraved mind, banishing the image, and asking everyone to forget it’d ever happened, Lil Dicky included the line on his new album for everyone else to hear.

There’s an almost incalculable level of offensiveness bound up in that lyrics. The First Lady is an inspiration to many millions of Americans, especially black women and girls, who are born into a subaltern state, suffering the dual burden of being black and woman, or triple when you consider the incredible poverty America serves as their fate. The black wealth and income gap has never been remedied in the U.S., and single black women between the ages of 36 and 49 have a median wealth of only $5. Black women are even largely left behind by mainstream feminism, a discourse many see as controlled by white voices. For the millions of black women America has made to feel ugly, powerless and poor, Michelle Obama stands as symbol of hope and inspiration whose importance cannot be understated.

Furthermore, a boast about white sexual conquest against black women evokes an incredibly dark history in America, that of the plague of the rape of slaves by their owners. Angela Davis writes about “the institutionalized pattern of rape” during slavery, which was “a weapon of domination, a weapon of repression” and not simply “an expression of white men’s sexual urge.” It was the brutal exercise of awful power over black women, as well as black men and children. It was violence against the woman and vile theft against black men, families and communities. Likewise, Lil Dicky’s line is sexually aggressive (“bend over”) and expropriative, as Mrs. Obama already has a man and a family. The line can only but suggest that the President would have his wife taken by Burd.

The line, though, is only the worst in an early body of work that operates by appropriation, privilege, and a perverse white resentment. Burd, who grew up in white, upper-middle-class suburban comfort, went on to land a six-figure job after college at an ad agency in San Francisco, and funded the early Lil Dicky videos with his ample savings. He has a life most would envy, and he knows it. He obsessively boasts of his white privilege, but yet finds a black privilege that he also wants to possess. “I just wish I could say black things,” he complains on a song from his last mixtape.

The video for “White Dude,” another song off the 2013 mixtape, is a four-and-a-half-minute gloat about the possession of white privilege, safety and comfort. "Please don’t take this as me just disparaging black people. It’s about me being happy that I’m white," Dicky says on the final verse, affecting an attitude towards white privilege that is highly reminiscent (and in all likelihood derivative) of a famous Louis CK bit that, whatever its own flaws, worked significantly better than this.

When cornered, as he was by Noisey’s Drew Millard, Burd will get evasive and defensive, and say something about "White Due" being “brilliant satire.” But scenes in the music video look like a sort of white privilege victory dance, to say nothing of the lyrics. He walks by a black man being questioned by the police -- by all appearances an actual encounter caught in an on-the-street video shoot -- and affects a cool, casual confidence at being immune to police suspicion, in accord with the lyrics. It is nothing less than a mockery of those who live in fear of state violence against black people -- haughty ignorance dressed up like self-awareness.

But Dicky's unsatisfied with the tremendous power, privilege and safety he was born into and also wants what he frames as black privilege. He wants all the privilege, and petulantly whines that it's kept from him. He’s preoccupied with a desire to be able to use the “n-word,” which, he raps, “would really help my rhyme scheme out / It's like the perfect filler word.”

A blog post from 2013 (apparently deleted but found here) finds Lil Dicky wishing, once again, to have a sort of black privilege he envies: “If I looked like Rick Ross, do you realize how much fun that would be? I’d literally get to say any combination of words without being judged. Proper societal standards just don’t apply to the Rick Ross’s [sic] of the world. They get to operate on a completely different playing field than the rest of us.” But the premise of the worse jokes in “White Dude” was that simply being black--looking like Rick Ross--invites police violence and incarceration. That’s how much fun it is to look like Rick Ross. He’s right: “Proper societal standards” don’t apply to black men -- or, rather, to the white police who assume their guilt and beat, kill, and imprison with near impunity.

Burd wants the cool parts of being black without the whole, you know, actually being black part. Being black isn’t a costume you put on; it’s living under white supremacy. And rap may sometimes be pop now, but it is also the sound and voice of a culture still endangered by white supremacy in all its forms: violent, political, economic, carceral, aesthetic and otherwise. So, while white people are allowed into hip hop, as they have been for decades, white privilege is not, because white privilege is the profitable use of that very same matrix of forces that keep black Americans in danger and precarity.

White rapper Macklemore was well aware of that line when he inexplicably beat out Kendrick Lamar for best rap album at the 2014 Grammys, and he understood that he had to go out of his way to acknowledge that, however awkwardly, that Kenrick had been “robbed.” The effort didn’t appear to satisfy many disgruntled rap fans, and Macklemore took to rap radio institution Hot 97 to speak on white privilege in more depth.

“You need to know your place in the culture,” the Seattle rapper told Hot 97’s Ebro. “Are you taking or are you contributing? … This is not a culture that white people started.” Macklemore went on to explain how his success is largely predicated on his being white. “To me, the privilege that exists in the music industry is the same privilege that exists in America as a whole,” he said. “It’s white privilege.”

Meanwhile, white rapper Iggy Azalea became to be seen as a wanton and unrepentant appropriator of black culture and suffered a series of humiliations on Twitter at the hands of Harlem rapper Azealia Banks. Banks and others’ critique found the Australian-born rapper affecting a “black” accent and benefiting from black culture while not, as Macklemore urged, contributing -- taking without giving anything back, which has been the white modus operandi for about five centuries vis-à-vis black America.

Banks assailed Iggy Azalea on Twitter last year, on the day following a grand jury’s failure to indict the police officers accused of murdering Eric Garner in Staten Island. “Black Culture is cool, but black issues sure aren't huh?” Banks fired at Azalea, who she criticized for remaining silent during the tumultuous past year of police killings and urban uprisings.

Banks sat down with Ebro shortly thereafter to deliver a heart-wrenching defense of hip hop culture against a new wave of appropriation, embodied mostly pronouncedly in figures like Iggy Azalea (and now Lil Dicky). “All this says to white kids is, ‘Yeah, you’re great, you’re amazing. You can do whatever you put your mind to,’” Banks began, before breaking down on-air. “And it says to black kids, ‘You don’t have shit, you don’t own shit, not even the shit you created for yourself.’”

Banks then widened her critique to put the cultural theft in the context of the rash of police killings and the entire history of violence against black bodies and black cultural expression. “Now, everybody knows that the basis of modern capitalism is slave labor...So until y’all motherfuckers are ready to talk about what y’all owe me, at the very fucking least y’all owe me the right to my fucking identity and to not exploit that shit,” at which point Banks could only choke out the words: “That’s all we’re holding onto: hip hop and rap.”

And Lil Dicky is perfectly happy to take it away. “Professional Rapper,” his studio debut, enters the Billboard rap chart at #1 this week, besting a list composed of a who’s who of popular rappers of the moment: Future, Drake, Meek Mill, Migos and Kendrick Lamar, among others. Brazenly unrepentant and gleeful white privilege sits atop the rap charts this week.

The album’s opening track is a sort of lyrical application for the job of rapper, delivered in a back-and-forth with Snoop Dogg. “Traditionally people have been doing the job [i.e., rapping] the same kind of way for a long time,” he tells Snoop, and he offers that “it could be working even better” with what he brings to the table.

What has rap been doing wrong? In the 2013 blog post he writes “Unless you’re an extremely stupid person that began life as a poor, violent man, only to see your fortunes turn once you started rapping, you won’t be able to relate to 99 percent of today’s rap music.” He’s upset that rappers aren’t speaking to the struggle of upper-middle-class twenty-somethings with six-figure jobs, which he refers to as his “trap.” “Every single rapper raps about shit I can’t relate to,” he writes in the same post.

Dicky wants rap to reflect the ignorance and indifference afforded the upper classes, the racially privileged, the safe, the bored. “I'm ignorant,” he raps on another track, “I’m indifferent / I don't care to know what I don't.” Let Twitter get ahold of you. You’ll learn then.