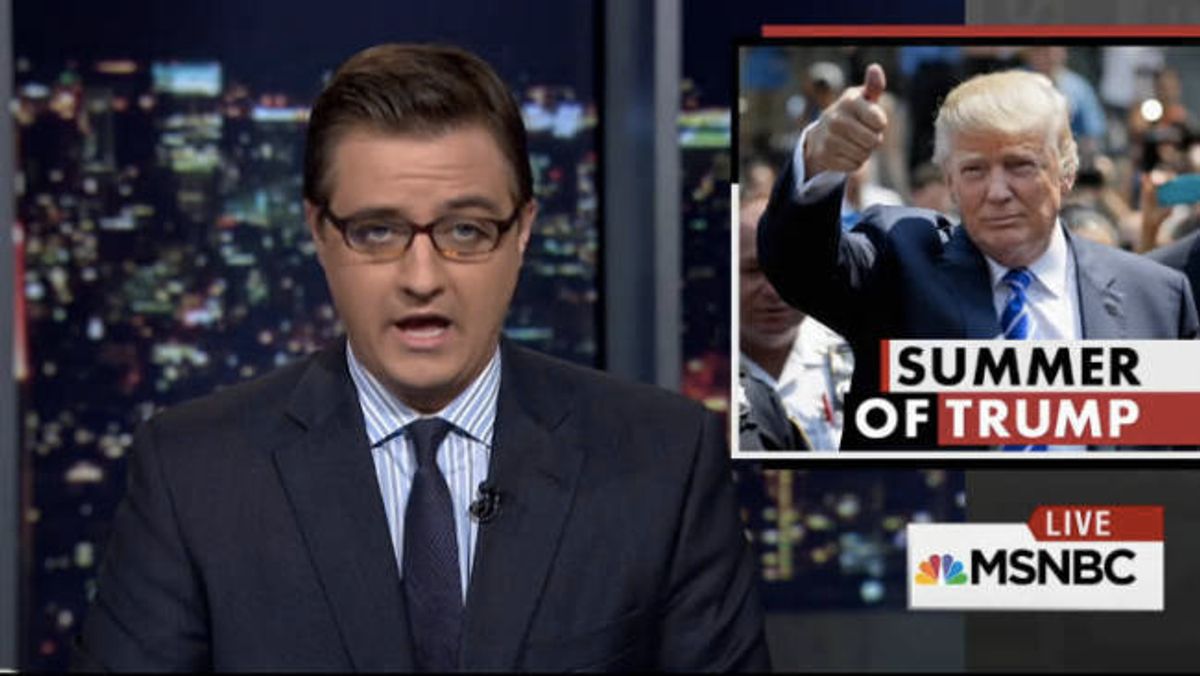 How is Donald Trump leading the most conservative field of Republican presidential candidates in modern history while holding such glaringly moderate-to-liberal positions like support for single-payer healthcare, and a record of past donations to the Clintons?

MSNBC's Chris Hayes explored that seemingly incoherent phenomenon and what he called the "Summer of Hell" Trump's rise has caused for fellow Republican presidential aspirants Scott Walker, Jeb Bush and Marco Rubio on Monday night's edition of "All In with Chris Hayes":

As Trump continues to dominate the poll and the airwaves, what's emerged is a somewhat bizarre ideology we might call Trumpism which combines extreme polarizing and confrontational, sometimes offensive rhetoric with an ideologically jumbled mix of policy positions. Some of them far, far, far to the right but some of them far more centrist than most of the rest of the entire GOP field.

We've been long been told that to win over the Tea Party and the GOP base, a candidate has to hew closely to conservative orthodoxy, ideology and ideas about small government and traditional social values. Trump's candidacy is revealing the rules we thought we knew either no longer apply or that maybe they never did.

Nothing that "the GOP front runner offers up mix of nasty rhetoric and far-right positions, but also moderation on a number of issues" like his support for affirmative action and protectionism, Hayes concluded that Trump's appeal is rooted in his tone and aggressive combativeness more than the whole of his policy positions. Former Republican National Committee Chairman Michael Steele agreed, arguing that Trump's success lies in his "conviction" and his ability to speak like "everyday folks" who "sometimes [] don't complete the sentence. They just express the thought as they feel it in that moment":

It's called conviction and that -- what comes through more than anything else with Trump is that he is convicted in what he's saying. He believes it and while it may for the typical Washington media type or the political prognosticator out there, they look at it, they hear jumbled noise, disjointed sentences and confusion, to Ezra's point, he is using words that resonate with average people out there, everyday folks and he's saying it very plainly and the way they would say it.

Sometimes they don't complete the sentence. They just express the thought as they feel it in that moment. They don't need to have every dot and every comma. So, I think for Trump, that what's working for shim that resonance, that ability to sort of layer over the populace a message that touches them and they're like -- that sounds like me.

Vox editor-in-chief Ezra Klein explained that the average so-called "moderate voter" does not necessarily hold moderate positions on every issue but rather holds extreme issues on a variety of "positions that average out to the middle" and that Trump appeals to these voters because his wealth has freed him from having to cave to the GOP establishment and donor class:

So, a moderate voter might be for single-payer health care and deporting all immigrants which, by the way, different points describes Donald Trump. The thing is that partisans tend to be very consistent in their political preferences and they tend to take their political cues from their party. So, the party, because their party has an incentive to get election, to win elections, tends to take a pretty consistent series of positions and take positions that are reasonably in the mainstream, positions they feel are achievable, that will not anger their core interest groups.

Watch the entire exploration of Trumpism, via MSNBC: