The 10 most cringeworthy Fox News interviews of the last decade

The bad, the insensitive, and the downright embarrassing 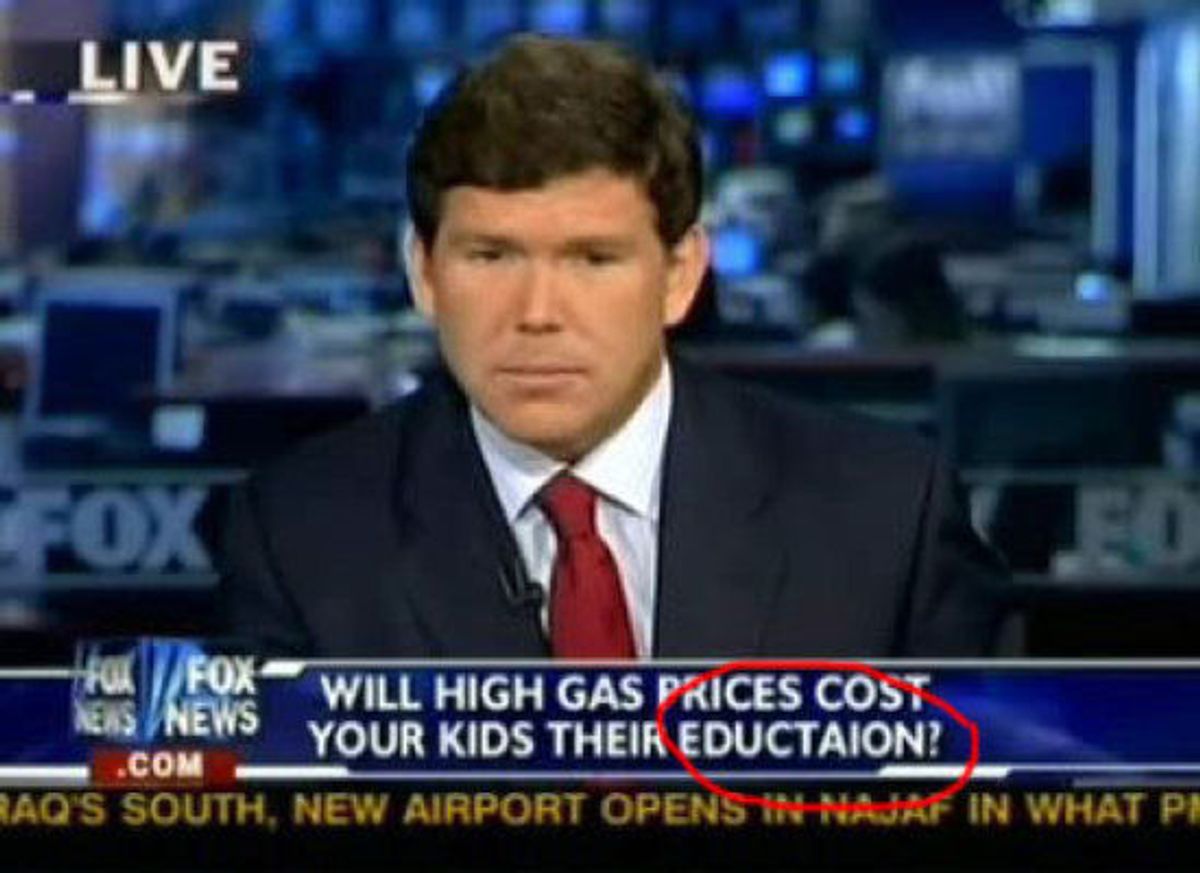 On Friday, Fox News aired what many are claiming was the most embarrassing interview the network has ever hosted. This is a truly impressive claim, one that's worth examining further.

A 2011 study by Fairleigh Dickinson University found that Fox News viewers are the least informed about current events. There are annual roundups and entire blogs devoted to Fox News disasters. There's so much to choose from -- from a chyron calling Elie Wiesel a Holocaust Winner, to Dana Perino rapping on "Fox & Friends," to Megyn Kelly announcing that pepper spray is "a food product, basically" -- that we've limited the scope to the 10 most embarrassing, cringe-worthy discussions conducted on Fox in the past 10 years. It will come as no surprise that most of them include professional shouter Bill O'Reilly.

In 2003, O'Reilly interviewed Jeremy Glick, a man whose father was killed in the 9/11 terrorist attack. When Glick said that the U.S. bore some responsibility for "training militarily, economically, and situating geopolitically" the Taliban, O'Reilly resorted to yelling, "Shut up! Shut up!" at Glick. He then cut Glick's mic off "out of respect" for Glick's father:

O'Reilly conducted a segment on illegal immigrants that soon turned into a shouting match between O'Reilly and Rivera. It devolved into O'Reilly yelling, "You want anarchy! You want open-border anarchy!" at Rivera.

16-year-old Jesse Lange may be the youngest person to school O'Reilly on national television. In a 2007 segment, O'Reilly criticized Boulder High School's sex and drug education conference, both misquoting and decontextualizing a conference speaker's joke to make it sound like the speaker condoned drug use. Lange, prepared, pulled out the original transcript, read the full quote, and then called O'Reilly out: "I think it's ironic that you'd point out condoning drug use when in your own book, 'The O'Reilly Factor for Kids,' you liken a high school student, a model student, 'toking on Saturday nights,' to a brain surgeon enjoying a martini while not on call."

Fox News anchors blamed beloved icon Mr. Rogers, who died in 2003, for everything that's wrong with Millennials today. Referring to him as an "evil, evil man," they called him the "root cause" of youth entitlement, even claiming that Asian children get better grades because they don't watch the PBS program.

Comedian Lee Camp gained some notoriety for his appearance on Fox gabfest "Fox & Friends," when he ended a segment on Mike Huckabee by raising a valid, though unrelated, point: "Can I just ask a question? What is Fox News?" he said. "It's just a parade of propaganda isn't it? It's just a festival of ignorance."

He pleaded with viewers: "People at home: Go outside! Love your children! Be with your family." The interview was then abruptly cut short.

Debates between O'Reilly and "The Daily Show" host are always entertaining, but in 2011, Stewart conducted one of the most brutal takedowns of O'Reilly on his own turf.

O'Reilly argued that Obama was "celebrating a cop killer" when rapper Common was invited to the White House for a poetry event. Stewart clarified that Common was "not celebrating, but honoring someone who was wrongly convicted of cop-killing" in his song about Assata Shakur, in the same way that artists like Bono and Bob Dylan -- who have both been invited to the White House -- have done.

"Why are you drawing the line at Common?" Stewart asked. "There is a selective outrage machine here at Fox that pettifogs only when it suits the narrative that suits them. This guy is in the crosshairs in a way that he shouldn't be."

Fox aired a poorly edited interview from "Fox News Sunday" between host Chris Wallace and Jon Stewart in 2011, portraying Stewart as nonsensical and illogical. The interview was so disingenuous that Stewart called out Fox News on "The Daily Show" and showed footage from the unedited, full video (available online) to show that Wallace actually admitted that Fox "tells the other side of the story" that more liberal networks don't offer, rather than being objective.

Immediately following the election, "Fox & Friends" attempted to do a segment on college grads who voted for Obama in 2008 but became Romney supporters in 2012. The show got hold of Max Rice, who in fact had dropped out of the University of Texas, but lied to Fox News to see if they'd do any fact-checking (they did not).

"Why am I supporting Mitt Romney?" he said. "I lost a basketball game to a friend of mine."

"Okay, so it sounds like you're not being very serious," said anchor Gretchen Carlson, before she cut the interview short.

Although the hot-tempered O'Reilly later apologized, in March the "O'Reilly Factor" host resorted to screaming at guest and political commentator Alan Colmes during a debate on President Obama's spending cuts.

"Hold it. Hold it. Because now I'm getting teed off at you. Give me one damn program he said he'd cut," said O'Reilly.

"Not entitlements! [slams fist on desk] One program!"

"Because you're lying. You are lying here," yelled O'Reilly.

10. Bill Cunningham tells Tamara Holder to know her place as a woman, 2013

"Hannity" hosted one of Fox's latest outbursts of misogyny and anger when frequent guest Bill Cunningham erupted at contributor Tamara Holder in a debate over the perjury investigation of Attorney General Eric Holder. "Wait a minute. You shut up. Know your role and shut your mouth," said Cunningham. Holder replied, "My role as a woman?"