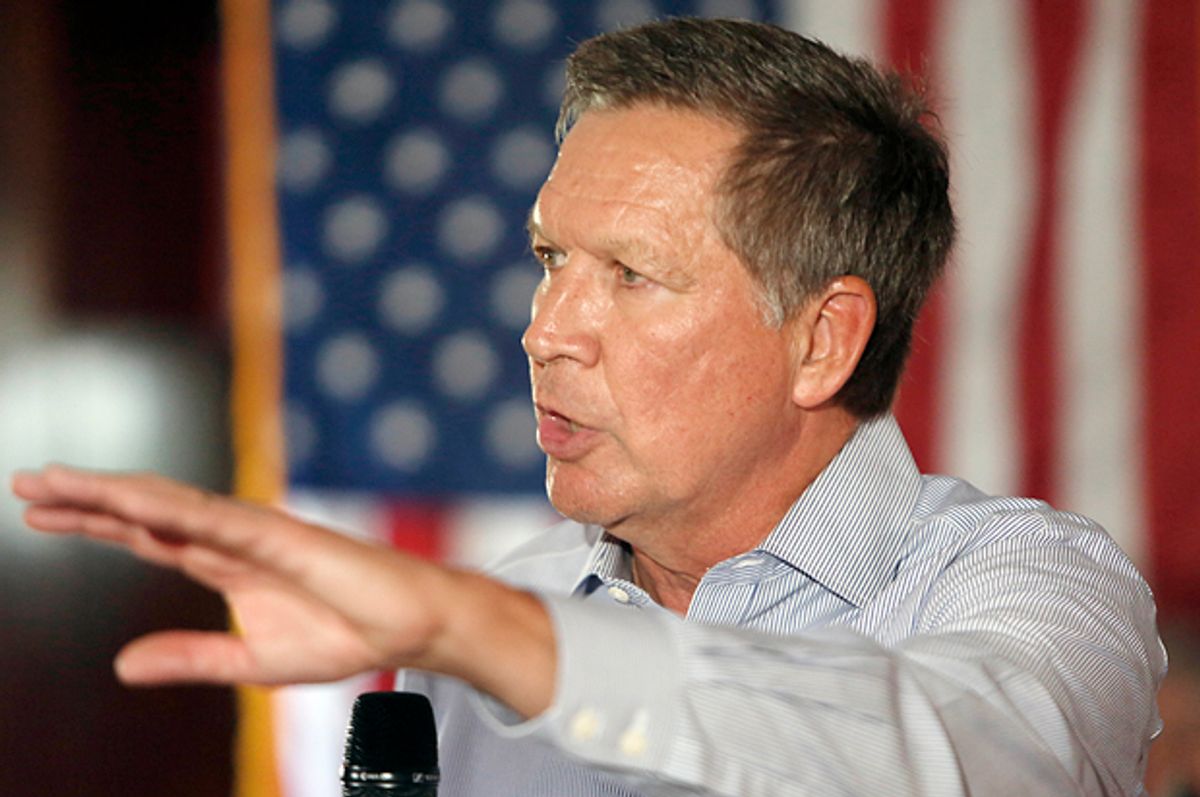 Erstwhile GOP frontrunner Jeb Bush only maintains any advantage over his 16 Republican rivals because of his record breaking fundraising, as the former Florida governor has seen his name recognition and polling advantage trounced by uber-celebrity Donald Trump, and now his firewall of New Hampshire is being threatened by fellow "moderate" John Kasich.

The Washington Post reports that Bush's campaign is worried about the first-in-the-nation primary state as the straight-talking, plain dealing Ohio Governor Kasich has seen his popularity in the Granite State rise with a sharpened focus on the state:

A late entrant, Kasich is winning buzzed-about endorsements and has shot up in the polls here amid a multimillion-dollar ad campaign by his allied super PAC, New Day for America.

Aides at Bush headquarters in Miami have been researching Kasich’s background, including the many votes he cast as a member of Congress, and are pitching reporters on negative stories about him. So-called opposition research is a staple of most campaigns, but it is telling that Kasich is now under the Bush team’s microscope.

Some major Bush donors quietly have reached out to the Kasich team in recent days to learn more about the Ohio governor and express interest in possibly supporting him, according to Republicans familiar with the conversations.

A spokesperson for New Day for America, the super PAC supporting Kasich, confirmed to Fox News that several Bush donors had been in contact with the organization in recent days but declined to elaborate.

Kasich’s campaign manager, John Weaver, told Politico last week that "he received two calls from New Hampshire journalists who claimed they had received opposition research from the Bush camp," although the Bush campaign denies the allegation.

Following the first debate in Kasich's backyard of Cleveland, Ohio, the Governor has seen his standing in the polls improve despite being one of the latest entrants in the crowded field while Bush has seen his second place standing hardly hold steadfast as political neophyte Ben Carson creeps ahead in many national polls. But it may more than Bush's troubling poll numbers that has some in his circle of support worried -- Bush's performance on the campaign trail is hardly inspiring. Take for example, this week's education summit in New Hampshire that put both moderates on the hot seat as the only two candidates who support the deeply unpopular (for the conservative Republican primary base) Common Core. Bush displayed a clear unease with an issue his campaign surely anticipated while Kasich effortlessly shrugged off criticism with confidence and ease:

Appearing at an education summit in New Hampshire, Bush and fellow Republican presidential contender Ohio Gov. John Kasich were both asked about their support for the controversial K-12 standards.

Kasich took a blunter tone than Bush, saying they were “pretty good” and “I’m not going to change my position because there are four people in the front row yelling at me. I just don’t operate that way.”