Rachel Maddow: Donald Trump is the monster truck in the GOP demolition derby

In New Hampshire, Trump once again overshadowed his GOP rivals 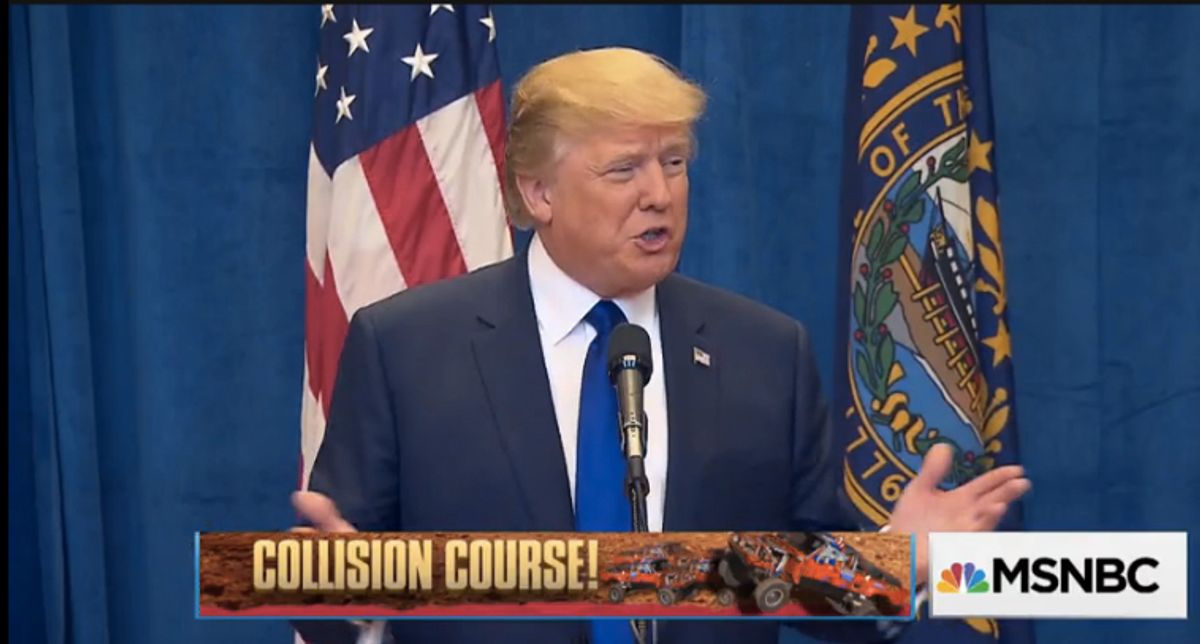 Last night, seven different Republican presidential hopefuls simultaneously descended upon one small section of New Hampshire but six of those presidential campaigns were "squashed by a monster truck" when Donald Trump made a last minute decision to join what Rachel Maddow described as the GOP demolition derby.

In Derry, Trump scheduled his own campaign event at precisely the same time as Bush's, just 20 minutes away. and drew a capacity crowd of 1,000 in the auditorium of Pinkerton Academy as well as an overflow crowd. Trump gave his patented performance and repeated his attack on Bush to a crowded that repeatedly hooted and hollered, according to CBS News:

"Right down the road, we have Jeb," Trump said early in the town hall, drawing boos. Trump mocked Bush for going "down like a rock" in early polls in the state and failing to excite his supporters.

"You know what's happening to Jeb's crowd?" he asked. "They're sleeping."

In one of Trump's references to Bush (most of which were met with jeers), one man yelled out, "Isn't Jeb sinking to the bottom of the Winnipesaukee right now?" (Lake Winnipesaukee is the largest lake in New Hampshire.) To which Trump replied, "My group! These are my people!"

By contrast, The New York Times described Bush's nearby crowd as "serious and sober" and Bush as having "dropped statistics like New Year’s Eve confetti":

At Mr. Bush’s forum, roughly 150 voters gathered to hear him speak, politely applauding when he entered. Mr. Trump’s crowd, by contrast, chanted for him and was, at least by Mr. Trump’s estimation, about 2,500 strong. That was an exaggeration — as Mr. Trump later noted, “I’m sort of a bragger” — but not a huge one; there were still several hundred people lined up outside, hoping to get seats, just before the event was set to begin.

In an apt sign of the enthusiasm imbalance, Fox News at one point cut away from Mr. Bush, midsentence, to focus on an empty lectern awaiting Mr. Trump.

Trump, ever the showman, was sure to mention his latest feud with a female celebrity when he seemingly admitted that Heidi Klum had won, praising her as “a very nice person” and as Maddow and NBC's Katy Tur explained during  "The Rachel Maddow Show" last night, Trump's strategy is an effort to milk his celebrity status and celebrity feuds as a way to "suck the air out of the room":

MADDOW: Donald Trump is the love object of American Republican voters in states across the country and nationwide, and it is unavoidable now.

Katy Tur: He thinks at this point that he needs to get his name out here, get the headlines, suck all the air out of the room, as we keep saying over and over again. And that`s what he is doing.

It is more about, hear me, here I am, see me, get the headlines, less about what I`m going to do. Trust me, I`m going to get it done is what he keeps saying.

MADDOW: Right. And tonight specifically, it`s here I am. Let me get the headlines. Let me get cameras turned toward me, thereby denying really, in effect, denying any sort of press coverage to any of the other candidates because everybody wants to hear from him more than from anybody else.