While Democratic candidates have made important strides, it will be for naught as long as Black lives matter less 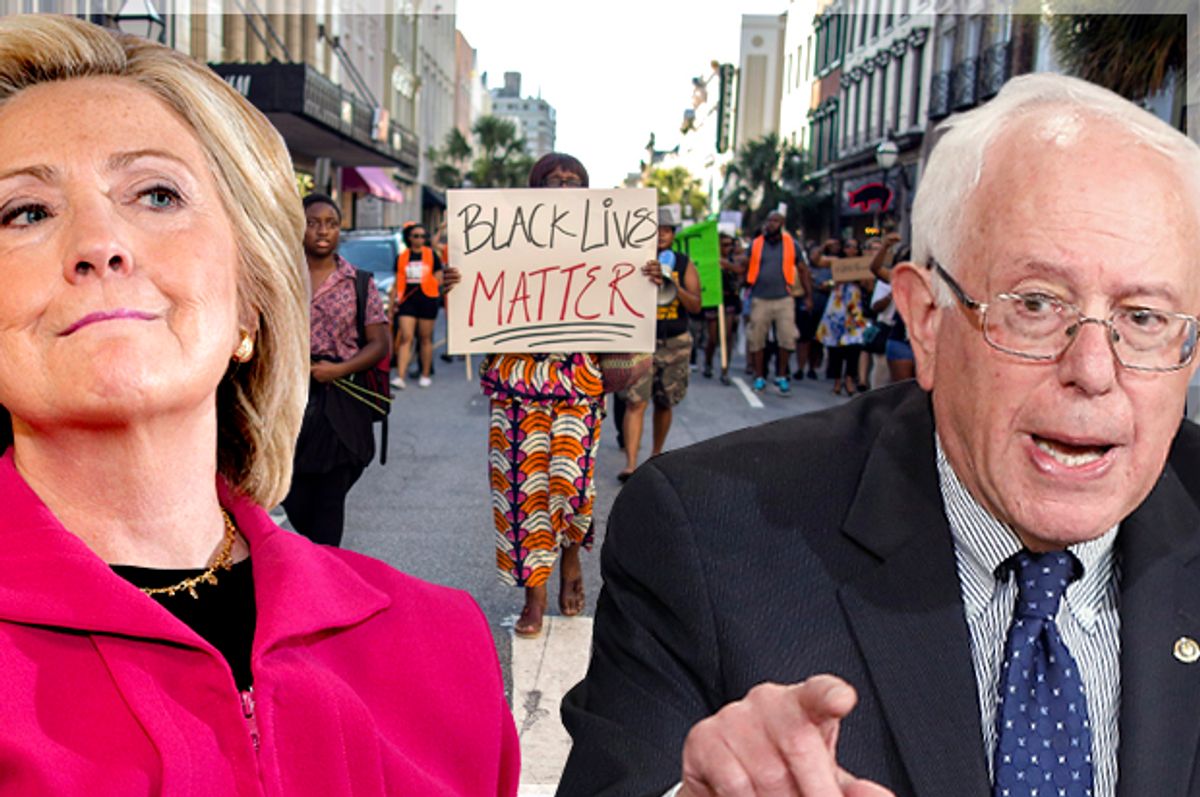 When Hillary Clinton met with the members of Black Lives Matter chapters in Massachusetts last week, they were very interested in hearing her speak about her personal transformation on race. In a later CNN interview, Daunasia Yancey and Julius Jones, BLM leaders who participated in the meeting, indicated that they needed to hear her personal narrative in order to trust her. They began talking to Clinton about what the movement “needs to do to change white hearts,” but she replied, “I don’t believe you change hearts. I believe you change laws, you change allocation of resources, you change the way that systems operate.”

This tension over capturing hearts and minds versus changing the operation of systems -- and, in particular, over which must come first -- is a long-standing one. In 1963, Martin Luther King argued,

Feelings matter for politics. And if “white hearts” don’t change, they are always capable of reconfiguring systems to maintain white hegemony. Moreover, I think when Black millennial voters continue to express their hesitancy about voting, that part of their desire for measures that fully overhaul the current system has to do with a fundamental distrust of white politicians and their white constituents.

Hillary Clinton conceded to the Boston BLM leaders that their mistrust and skepticism are “historically fair,” “psychologically fair,” and “economically fair.” She also conceded that for the most part we should not expect “white hearts” to change.

Thus she sounds a King-ian note when calling for legislation, sanctions and systemic changes to do what moral suasion cannot do.

The problem is that nearly 50 years after the death of King, young Black people are not convinced that changing systems and laws without changing social consciousness will fix the problem either.

For instance, in White v. Crook (1966), a U.S. District Court in Alabama struck down the all white, all male jury system after Black residents of Lowndes County, Ala., challenged the processes by which women in particular were excluded from participation on juries. Two of the attorneys for the plaintiffs were famed white feminist legal scholar Dorothy Kenyon and Black feminist legal scholar Pauli Murray.

Nearly 50 years later, a sweeping new study has emerged to suggest that in Alabama, North Carolina, Louisiana and Georgia, prosecutors strike Black jurors from juries at “double or triple the rates” of other citizens. In Shreveport, Louisiana, Blacks are struck from juries at three times the rate of anyone else. Only 25 percent of jurors in Caddo Parish, where Shreveport is located, are Black, but the population is between 44 percent and 48 percent Black, and the town now has its second Black mayor. One of my two hometowns, Shreveport sends the most Black men to death row of any district in the United States, and is located in a state that incarcerates more people per capita than anywhere in the world.

The New York Times reporting on this study found that use of peremptory challenges by Shreveport prosecutors was particularly troubling. In one case, a Black man with dreadlocks was struck from the jury because the defendant in the case also had dreadlocks. Surely, the same hairy logic does not apply to white jurors and defendants. By contrast, a white woman who indicated that she would not challenge her jury peers if they made racially prejudiced remarks during deliberations was not struck from the jury.

White v. Crook was viewed at the time as a broad corrective to a a jury system that had been a farce for African-Americans in the first half of the 20th century. But five decades later, African-Americans in Southern locales are still routinely excluded from jury service for a range of reasons that appear on the surface to be “race-neutral,” as one Shreveport prosecutor described his challenges. But there can be no “race-neutral” politics of jury selection in a place like Caddo Parish, which was widely considered one of the most violent counties in the country after the Civil War because of high rates of lynching. The Black Strikes study of its jury selection practices indicates that many of those practices were codified in the late 19th century in the same exact period that strange fruit swung from Parish trees on the regular. And to add insult to irony (and injury), a Confederate Memorial sits in front of the Caddo Parish courthouse.

Perhaps this is what Hillary Clinton means when she assesses the concerns of the Movement for Black Lives as historically fair. And the latest data on the wealth gap certainly make clear that Black Lives Matter demands are economically fair. Another new study has found that “from 1992 to 2013, the median net worth of blacks who finished college dropped nearly 56 percent (adjusted for inflation). By comparison, the median net worth of whites with college degrees rose about 86 percent over the same period, which included three recessions.”

So even when Black people go to college or try to do their civic duty and serve on juries, justice, whether social or economic, eludes them. At the same time, the mounting evidence of structural racism still has not managed to sway a significant swath of the white population.

Candidates on the left are therefore going to have to find the sweet spot between calling for white people’s hearts and minds to change and doing the work of transforming systems. Bernie Sanders seems to have caught on, and has released a broad racial justice platform that talks about the need for system-wide transformation, an end to privatized prisons, re-enfranchisement of ex-felons, and sweeping policing reform.

But none of these candidates on the left have yet managed to capture the hearts of young Black (potential) voters who keep shutting down their events. Many movement sympathizers of all races have expressed frustration with the strategy of the Movers, wondering what the point of challenging candidates is if they don’t believe in voting or don’t think the system can change.

But I think we have to go back to the question of trust and changing hearts. The real question is “Can and will White people change?” It’s an uncomfortable question, because change means relinquishing power and privilege.

Change means that white people have to stop thinking of the value of life as a zero-sum matter, as I heard one social media commenter put it recently. But Hillary Clinton only recently began to affirm that Black Lives Matter. Her initial, gut response was to proclaim that “All lives matter.” That she now says "Black lives" feels like equivocation to both supporters and detractors. And while her deflection about the necessity of legislation is not untrue, it is a convenient truth that allowed her to deflect from having to address the inconvenient truth about her own initial defensiveness to the proposition that Black Lives Matter.

When White people say “All lives matter,” they betray a troubling belief that affirming the value of one group’s life diminishes the value of “all lives,” or more specifically white lives. This zero-sum calculus fails to acknowledge that white lives already have more value in the system. The way that juries are rigged to disproportionately convict Black defendants is just one example of how white lives are used to systematically disempower and devalue Black life.

But more troublingly, we should all sit with the fact that white lives might actually have surplus value in the system -- by which I mean, they simply have more than their fair share of value. We could call it surfeit value (or excess value, if the Marxist terminology is off-putting). To be clear, every life is of inestimable value. But the point is, if some lives are overvalued, others are undervalued. So if white lives have surplus value, Black lives have depreciating value. Consider the way that pro-life advocates have taken to the cause of advocating for unborn Black children as their version of a racial justice program. Yet, when these children are born, they become victims of a set of anti-Black social structures predicated on the devaluing of Black life. Like cars, the value of Black lives depreciates as soon as you “drive them off the lot,” or birth them from the womb, as it were.

Under a system of white supremacy, white people experience calls for social equality as a devaluing of white life, rather than as a necessary systematic recalibration of structures so that all lives matter equally. To do this, we don't make white lives matter less. We make Black lives matter more. Because the value of white life remains the measuring stick for the value of all lives, white people have to resolve not to see the rising value of other lives as a diminishing of their own value. And that requires a change of heart.

The Movement is calling for a change of hearts and minds. Its call is rooted in the recognition that we don’t just live within systems; systems live within us, and those systems determine how we make meaning and value out of the world and people around us. Ultimately, those Movers who vote may vote for the candidate with the best articulated platform for racial justice. But until that time, they are going to be looking for leaders who honestly and sincerely get down to the heart of the matter.