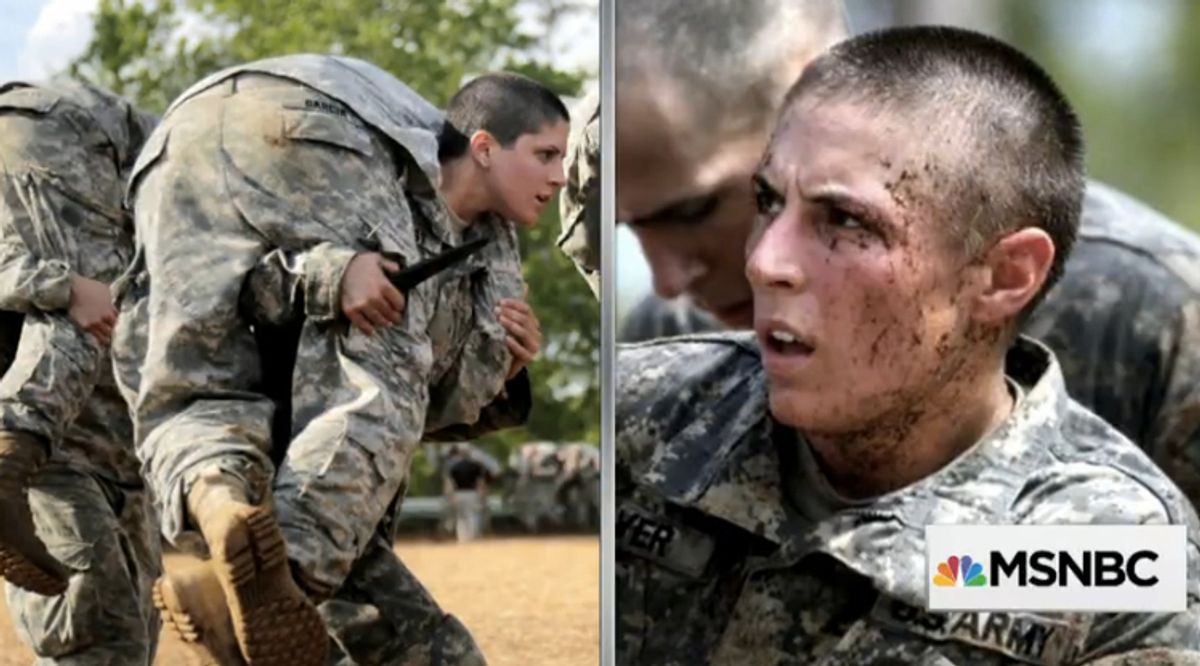 Just 42 percent of those who start Ranger training graduate. More than 1/3 do not make it to the fifth day. Graduates must complete a 5 mile run in under 40 minutes and a 12 mile hike in less than 3 hours. But both Wespoint graduates were up to the task, completed the training and will graduate from the school today although as women, they are unable to serve in the combat force.

"I was thinking really of future generations of women that I would like them to have that opportunity so I had that pressure on myself," Griest explained at a remarkable press conference yesterday during which her male Ranger School classmates admitted to their initial skepticism before having to depend upon their female counterparts' strength during a moment of need in the midst of the grueling course. "I was pretty skeptical," 2nd Lt. Michael Janowski confessed before revealing the moment he realized that Lt. Haver was physically and mentally capable of become a Ranger:

Now, we got to mountains, and there was one night we were doing a long walk. I was at 320 gunners and I had a lot of weight on me and I was struggling. I stopped and I asked halfway point, hey, can anyone help take some of this weight.

I got a lot of deer in the headlights look, a lot of people were like, I can`t take anymore weight. Shaye was the only one to volunteer to take that weight. She took the weight off of me and carried it the last half of me, literally saved me. I probably wouldn`t be sitting here right now if it weren`t for Shaye. So, from that point, no more skepticism. I knew she was going to make it right through.

MSNBC military analyst, Col. Jack Jacobs, explains how such a reaction was likely part of the Army's strategy:

JACOBS: Well, I think it's kind of interesting. The original assumption would be that if they wanted to test women out to see if they could be in combat units, they would stick them in combat units in the States, where they're in garrison. If they're out in the woods, they have rucksacks and so on and firing blanks and doing war games and small unit tactics and so on.

And then maybe, much later on, they would decide whether or not they were going to send women to the toughest school in the United States Army had. They didn`t do that. They did it exactly the opposite way. They sent women to the toughest school first. And the result of that is, of course, is that it`s difficult to engender any kind of support for people who say, women can't take it. It's going to be sometime probably before women

MADDOW: Just because -- anybody saying women can't take it, statistically speaking, none of those people are going to be people who could do what these women just did at the Ranger School.

Watch the discussion, via MSNBC: