Responding to yesterday's turbulent markets, Trump made even more clear that he's completely out of his depth 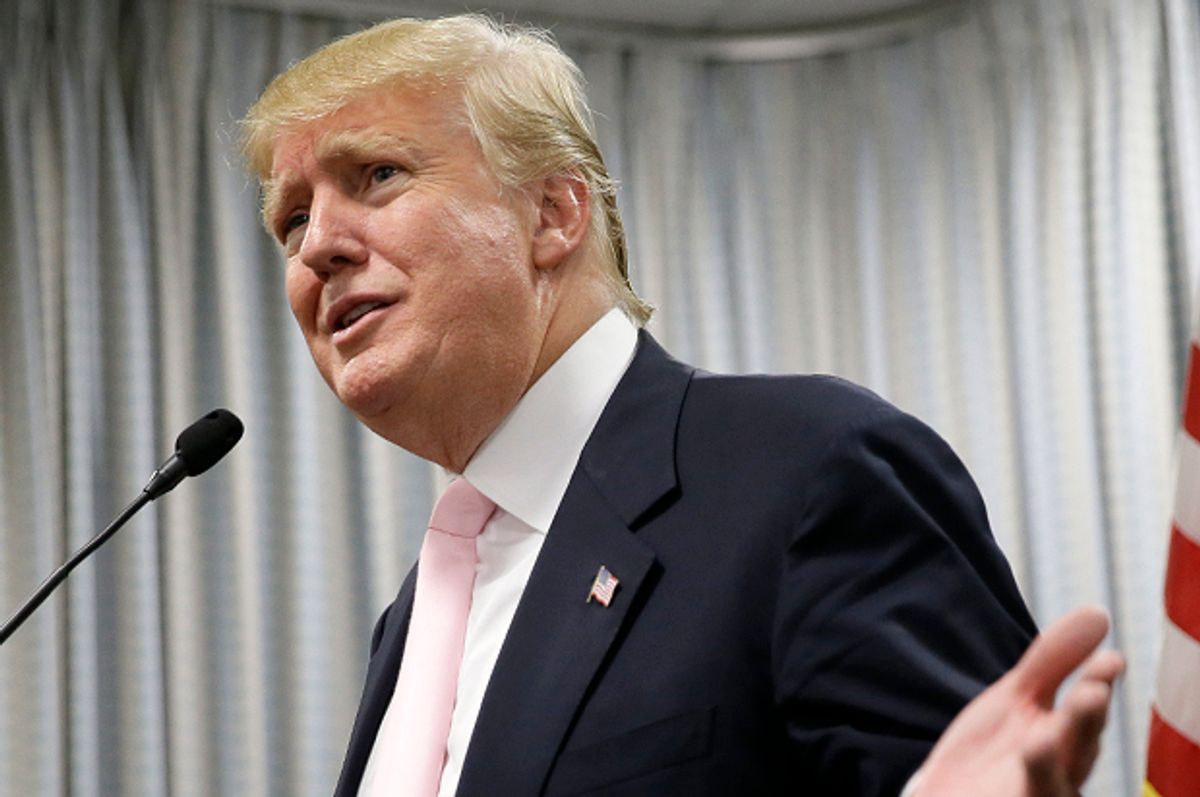 On the morning of this week's stomach churning stock-market roller-coaster ride, GOP frontrunner Donald Trump came out swinging with an Instagram video shot heard round the world. Looking very seriously into the camera, he said:

"I've been telling everybody for a long time China's taking our jobs. They're taking our money. Be careful: They'll bring us down. You have to know what you're doing. We have nobody that has a clue."

He followed up with some very strong, powerful, patriotic tweeting:

As Politico reported, most Wall Street analysts scratched their heads at The Donald's "analysis"

The facts are that the U.S. economy is not actually highly tied to China. And many market strategists believe the U.S. market was ripe for a significant correction with valuations at historic highs and fears rising over coming interest rate hikes from the Federal Reserve. The Chinese decline was simply a convenient trigger. And by earlyMonday afternoon the Dow Jones industrial average had already reversed much of its initial 1,000-point drop.

“China is a growing market for the U.S. but it is still very small. Even if you throw in all the rest of the emerging markets, it’s still just 2 percent of our GDP,” said Ian Shepherdson of Pantheon Macroeconomics. “It’s a problem for big U.S. companies like Apple and GM that want to take market share among Chinese consumers. But it’s not doing damage to most of the U.S. economy. And this is hardly a market calamity. It’s simply a correction that takes us back to where we were in the spring of 2014, which was a pretty good place.”

Donald Trump is a very successful real estate magnate. But the way he talks about the world economy shows either that his knowledge is limited to some talk over drinks at the club or he's just a plain old nationalist demagogue. I'd guess the latter. He can't be that dim.

The fact is that while immigrant bashing has been the big applause line in Trump's stump speeches, he has spent almost as much time bashing China and promoting himself as someone who "has a clue" about how to make the world economy work for Americans because he knows how to negotiate a deal. (He often digresses at this point into a long story about how nobody thought he could pull off the purchase of the Doral golf course but he went in there and kicked butt and took names. According to this, it was actually his 9 months pregnant daughter Ivanka who made that deal, but whatever.)

Trump's appeal, therefore, is not limited to his harsh nativism. His chauvinism and nationalism are just as potent. Indeed, it's entirely possible that we will see a shift in the emphasis among all the Republican candidates, including The Donald, away from deportation and wall building to China and Japan bashing. One gets the sense -- from Jeb Bush's comment yesterday explaining that he was really referring to Asians with the term "anchor baby," as well as from Scott Walker's inane demand that the president cancel the Chinese premier's visit because of the stock market drop -- that someone has decided blaming Asians rather than Mexicans for whatever their voters are upset about is a smarter tactic. Asian Americans are a smaller voter demographic to be sure, and they moved pretty heavily into the Democratic column in recent elections. But the way these Republicans are going, every last racial and ethnic minority will feel personally insulted before anyone casts even one vote in Iowa.

So how exactly does Trump plan to make good on all his talk? Trump told Joe Scarborough back in June that he would bring on his good friend investor Carl Icahn, former GE Chairman Jack Welch or KKR's Henry Kravis, all very famous names from the 1980s, as Treasury Secretary. He explained:

[China and Mexico] “are taking our business like we're a bunch of babies. We don't have our best and our brightest negotiating for us. We have a bunch of losers, we have a bunch of political hacks. We have diplomats. I know the smartest guys on Wall Street.I know our best negotiators. I know the overrated guys, the underrated guys, the guys that nobody ever heard of that are killers, that are great. We gotta use those people.”

He has since said he would also use them as trade representatives and other "negotiators" in various ways. Because they aren't "babies." In fact, they are all in their 70s.

Tweeting must be the new medium for all those high level global negotiations Trump keeps talking about.

No word from Welch as yet. But all this brings up some very interesting questions. Icahn, Kravis  and Welch are progenitors of of the corporate-financier strategy that upended American business in the 1980s. Kravis was an inventor of private equity, Icahn was a notorious corporate raider, and Welch created the concept of the modern corporation. In fact, Welch famously set forth the idea that every manufacturing plant should be built on a barge so that factories could float between countries in order to profit from currency manipulation,subsidies, and low taxes or labor costs. How that would make America Great Again — as opposed to a few wealthy businessmen — remains unanswered.

Carl Icahn, meanwhile, served as a model for the Gordon Gecko chatacyer in Wall Street" and has been called "one of the greediest men on earth." He's worth $25 billion or more, not quite as rich as a Koch brother, but certainly among the richest of the Masters of the Universe. He and Welch and and Kravis, Trump's boys, are the guys who would willingly bring down the state -- for profit. They are the swashbuckling business revolutionaries of the 1980s who made their careers as economic wrecking balls, loathed by the financial establishment for their destabilizing predatory activities and the destroyers of  well-paying jobs for American workers. These are the men the GOP frontrunner wants to put in charge of the economy.

As a friend of mine ominously put it the other day, "There might just be a group of 70-something-year-old billionaire revolutionaries who just think they can run the country directly instead of dealing with those pesky annoying politicians. They upended corporate America, which was much tougher than politics."

These free-trading, corporate raiding, off-shoring billionaire contemporaries of Trump, the 2015 populist hero of the white working class which worships him for his phony advocacy on their behalf, represent the apotheosis of rapacious American corporate values. It would be funny if it weren't so frightening.