I'm a teacher, and I'm tired of being scapegoated: Why the GOP's attacks on educators flunk the evidence test

John Kasich's recent "joke" is only the latest indignity. I've had enough 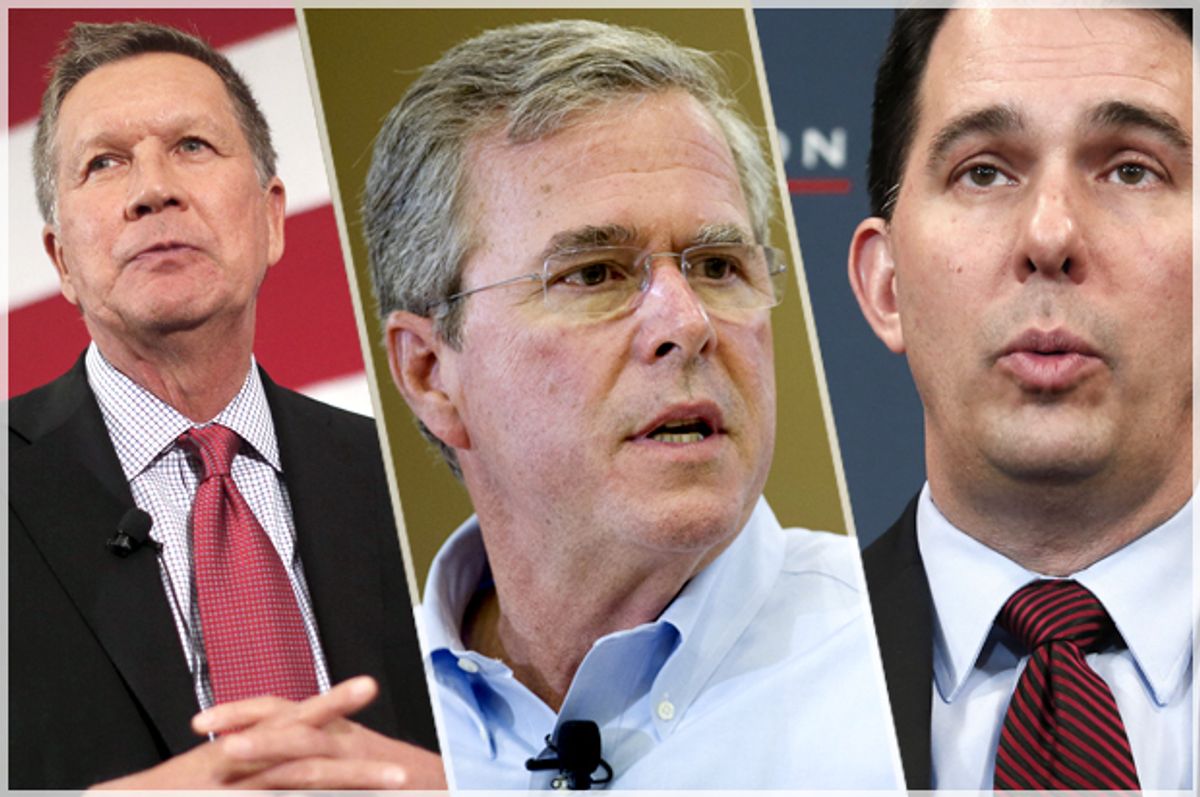 When I attended public elementary school, I was taught that America does not have a king. Rather, our country's founders staged The American Revolution to avoid answering to a monarch. I recently learned of Governor Kasich’s statement, “If I were King of America, I would abolish all teachers lounges where they sit together and worry about how woe is us.” As a public high school teacher, I am compelled to respond to this and other troubling remarks Governor Kasich and a couple of his fellow Republican presidential candidates made during last week’s “education summit” in New Hampshire.

Governor Kasich arrived at his “If I were King” comment after stating, “I think a lot of our teachers feel that we don’t understand the challenges they have in the classroom because they are getting kids who have [been] basically not been loved—that when we evaluate them they think, oh my God, we’re out to take their jobs. But we’re not out to take their jobs.”

By his use of the pronoun "we," I can only assume that Governor Kasich means like minded people, or simply put, his fellow Republican candidates. What a relief to learn that they are not out to take my job. Certainly, they wouldn’t be able to afford to campaign in their desired fashion on my salary. Nor would they have the time. It may be surprising for Governor Kasich to learn that my time as well my colleagues’ time, are not being spent worrying about Kasich’s aforementioned evaluation system. A system on which my Republican-led state legislature has yet to agree. Instead, we are busy planning lessons and assessing student progress.

My colleagues and I face immediate challenges such as navigating seating arrangements for classes of up to 40 students as a result of a hiring freeze due to district funding cuts. We are occupied with attending 3 after school events in addition to our club sponsorships, coaching positions, and daily schedules per semester in order to qualify for merit pay, which we desperately need in order to survive. And, we are frequently attending professional development sessions in part because we are required to, but also because we desire to be pedagogically astute. The majority of us arrive to school every day with the desire to accomplish our main objective. That objective is to teach our students in measurable and meaningful ways.

It may also surprise Governor Kasich to learn that my students, all 130 of them— a light load compared to many of my colleagues—appear to be loved and supported. Even if some students are experiencing difficulties in their immediate families, they appear to be receiving care from guardians and friends, and to a great extent, yes, their teachers. If Governor Kasich is going to argue that our nation’s children are unloved, then why isn’t he also offering solutions to this perceived problem? I wonder if it is because what he meant when he stated that teachers are ‘getting kids who have [been ] basically not been loved’ has more to do with a lack of financial security than it does with emotional security. To deal with such an assertion requires that more attention be given to our nation’s struggling middle class and poor.

In any case, when we teachers are afforded the luxury of eating together in our teacher’s lounge, we do just that. We eat. We share recipes, discuss lesson plans, offer support and discipline approaches to new teachers and try to squeeze in time to use the bathroom before the bell. We are too professional to “sit together and worry about woe is us.”

Kasich did clarify that he believes teachers are called to make kids learn and “sometimes that means shaking it up a little bit.” He stated to a woman in attendance, “See that cross you are wearing around you neck. The lord expects that. He expects us to get out of our comfort zone on the behalf of children. Because you see education is about unlocking this brain to discover and improve the world.”

I assert that implementing change requires less god-speak and more of the almighty dollar. Educational funding provides a gamut of resources, from textbooks and technology to new desks and athletic equipment. Override elections have become the new Hail Mary in financing public education, and that is unacceptable. Shaking things up in today’s educational landscape means adequately funding our nation’s schools, which were established to provide compulsory learning to children of every religion, race and class. Diverting funding to trending charter programs with little to no measurable advantage over public schools often serves to widen the gap impeding access to safe and effective education.

Moreover, motivating students to improve the world means leading by example. Improving the world means helping our most vulnerable populations as well as giving attention to our increasingly endangered environment. America’s youth should be at the forefront of enacting change in these areas. These topics were noticeably absent from Kasich’s remarks as well as those by former Governor Jeb Bush and Wisconsin’s Governor, Scott Walker, who were more focused on addressing the Common Core.

Bush, on record as having been a proponent for the Common Core, responded to moderator Campbell Brown’s question pertaining to the national standards, "If people don't like Common Core, fine. Just make sure your standards are ... much higher than the ones you had before. We can't keep dumbing down standards.” In response to Brown’s further questioning about how one could measure standards if they are not common, Bush indicated that he believed alternatives would be apparent.

One standard that English teachers such as myself are required to teach is the citing of evidence when arguing a point. If Jeb Bush submitted a paper with the comment, alternatives will be apparent, I would hand it back and instruct him to revise it immediately making sure to provide citable evidence in his next draft. I have some feedback for Governor Walker too. He indicated that he desires high standards but that he prefers such standards be established “by people at the local level.” I am certain that he didn’t mean teachers, and that is just mind boggling. Who better to ask? Why are teachers so often the last to be consulted about educational standards? Is it because there are fewer and fewer of us? Valuing teachers means listening to them. Not demonizing them or disregarding their expertise—two practices that are leading to nationwide teacher shortages.

Another standard that I’m required to teach involves self assessment. Apparently, Governor Kasich is lacking in this skill. This became clear when he was asked by Campbell Brown what he would like to accomplish that he hasn’t been able to yet in his Governorship. Kasich responded, “I’d have to sit down and ask my staff where we are frustrated.” When I ask my sophomore or senior students where they believe they need improvement, they don’t respond, “I have to ask my friends.” It doesn’t seem unreasonable to expect a presidential candidate to exhibit the ability to articulate his or her needed areas of improvement. One should be able to do so as well as a high school student can.

It is my sincere hope that whomever is elected as President in 2016, he or she will meet high expectations in the area of educational legislation. I hope that these expectations will be reached by addressing the need for the adequate funding of our schools as well as by reflecting the wealth of knowledge our nation’s teachers can offer. We are not the enemy. The majority of us have chosen our profession out a deep desire to enable our youth to master skills well enough that they can begin to improve the world. We spend upwards of 40 hours per week with our nation’s children and have the expertise necessary to help create sensible legislation.

In spite of what some politicians would have their constituents believe, most teachers are extremely solution oriented. Our lounges aren’t filled with the sounds of woe. Typically, our lounges sit empty while we tend to the important work of education. We do this work while too many who are not educators continue to make incorrect assumptions and stereotype our intentions in grandiose and damaging speeches or legislation. That is no way to bring progress to our nation—let alone any kingdom.

Jess Burnquist received her MFA in Creative Writing from Arizona State University. She currently teaches high school in the Phoenix metropolitan area. Her work can be found at www.jessburnquist.com.