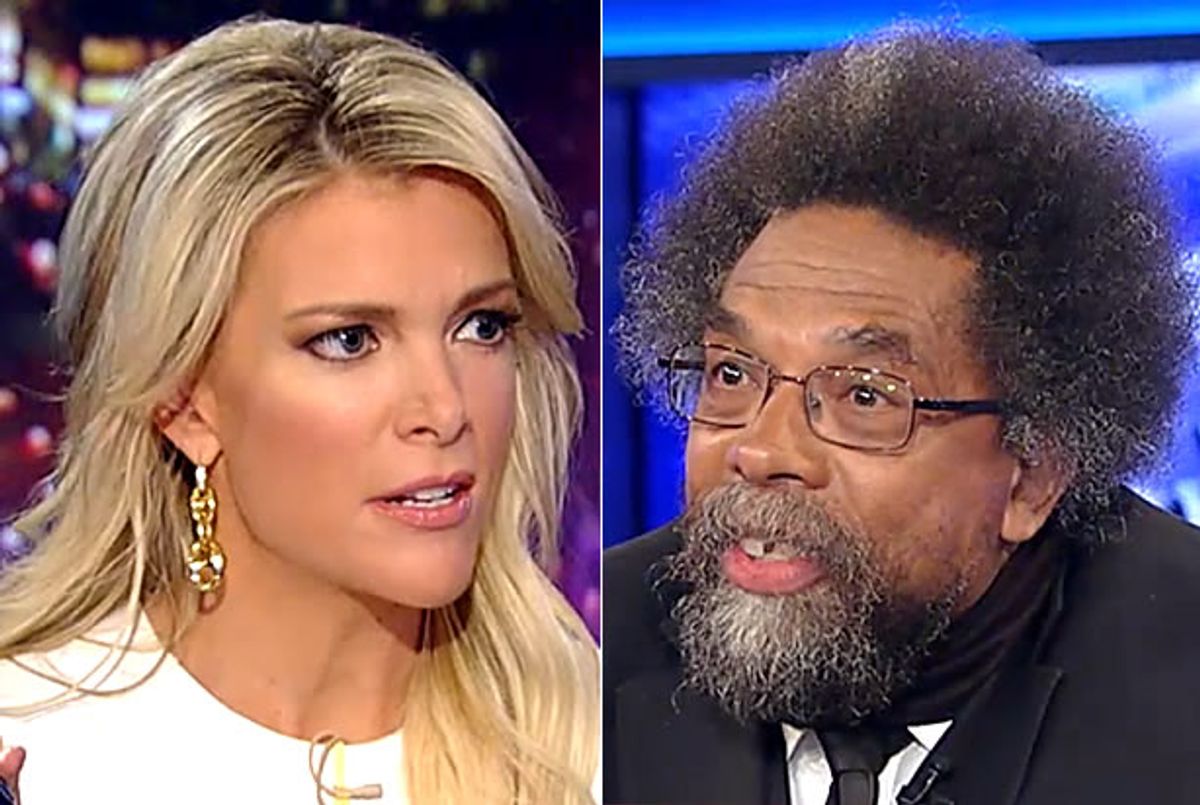 In her return to television Monday night, Megyn Kelly discussed the #BlackLivesMatter movement with Cornel West, but because she's still on Fox News, she had to frame the conversation in terms of black-on-black violence.

To this end, Kelly opened by playing the video of Peggy Hubbard that went viral this weekend, in which the Navy veteran excoriated the black community for not protesting the death of 9-year-old Jamyla Bolden.

"They’re hollering police brutality," Hubbard said in the video viewed by over 7 million people. "Are you fucking kidding me? Police brutality? How about black brutality. You black people, my black people, you are the most violent motherfuckers I have ever seen in my life. A little girl is dead. You say black lives matter? Her life mattered. Her dreams mattered -- yet you trifling motherfuckers are out there tearing up the neighborhood I grew up in."

West ventured that Hubbard's "traumatized, terrorized, and is certainly right to have the kind of empathy she does in terms of the death taking place in black communities. But we have to distinguish between state-sponsored violence and violence against black people owing to actions black people do to each other. Both are important, but they're not the same thing."

West continued, saying that the black community is in a "state of siege, a state of emergency like the brother Dr. Carson talks about" in his recent USA Today op-ed.

"He's right about the state of emergency, he's right about the need for quality education, and he's certainly right that we must have jobs with a living wage," West replied. "But at the same time, we can't get that with the way society is organized at this point. This is where brother Bernie Sanders comes in."

Kelly noted that Carson specifically said black people shouldn't focus on Bernie Sanders, to which West retorted that "Sanders is the only one who's going to provide a living wage." He also noted that, like Sanders, Martin Luther King, Jr. was a Democratic socialist who focused on issues like education and a living wage.

"But what about you?" Kelly asked, "you're part of the #BlackLivesMatter movement...where are protests over the state of inner-city America and the policies that have left African-Americans communities in the state they are?"

West replied by reminding Kelly that there's a difference between state-sponsored violence and violent acts committed by individuals. She noted that "the difference is staggering" between the number of black people killed by other black people versus those killed by police.

"When you socially neglect a people, when you economically abandon a people, when you transfer wealth from them to the well-to-do, what are a people going to do?" West asked. "They're going to respond with very sad forms of despair, and that's true for everybody, I don't care what color you are. It's true with Appalachia, it's true with indigenous people, it's true around the world."