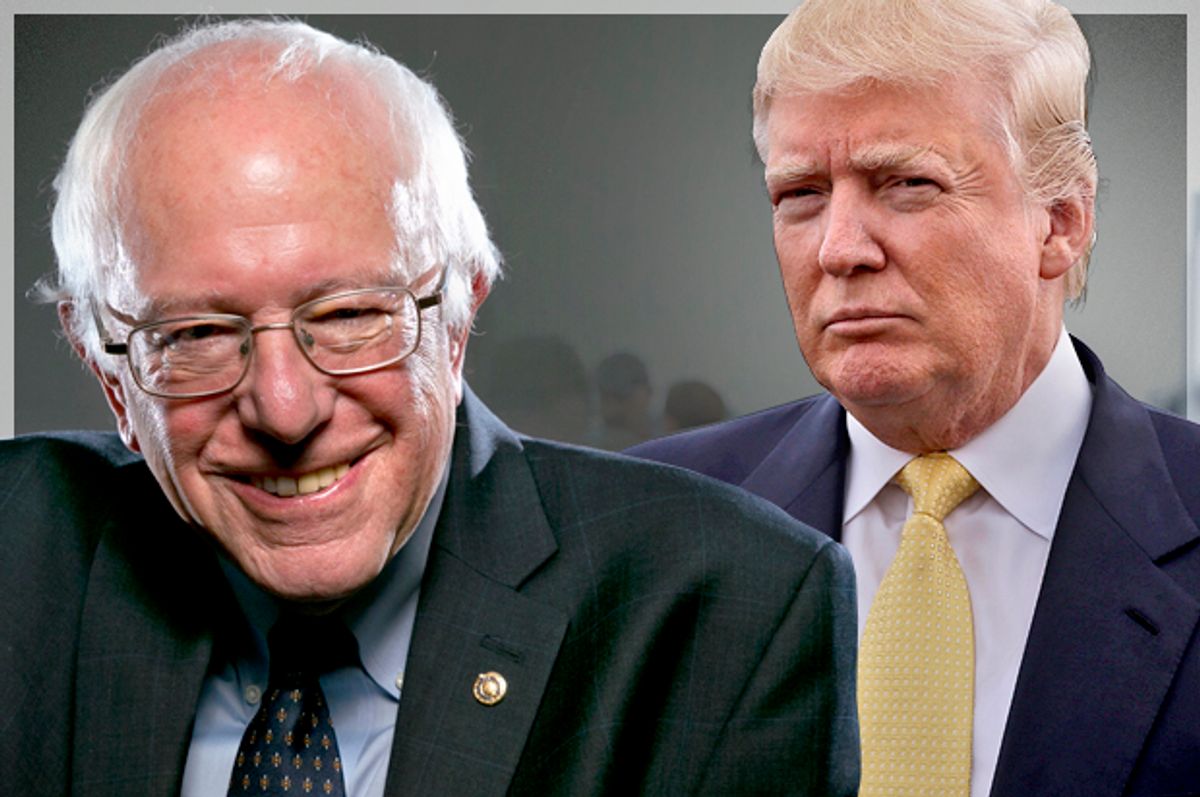 Facebook
Twitter
Reddit
Email
view in app
Raising the roof, shattering the ceiling of support, whatever you call it, it's becoming clear that Donald Trump's rise in the Republican Party is only growing with each passing faux pas and xenophobic rant. A new poll of voters in New Hampshire shows that the billionaire's ceiling of support continues to climb in the state where one Trump supporter predicted a "classy" Trump presidency.

But let's begin with the Democrats.

Vermont Sen. Bernie Sanders leads Hillary Clinton by seven points in the Granite State, according to a new Public Policy Polling survey out today. The poll found that 78 percent of New Hampshire Democrats view Sanders favorably, compared with 63 percent who feel the same way towards Clinton, making Sanders the most popular candidate on either side of the political field in New Hampshire. Vice President Joe Biden, who appears to be strongly considering a bid of his own, was not included in the poll.

This latest PPP poll comes after a Boston Herald poll released earlier this month also showed Sanders with a seven-point lead over Clinton in the Granite State.

On the Republican side, Donald Trump continues to dominate the crowded field, trouncing his nearest rival, Ohio Governor John Kasich, by a factor of more than three -- 35 percent to 11 percent.  Trump has seen his rise in the first-in-the-nation primary state come at the expense of one-time poll leader, Wisconsin Governor Scott Walker, who has seen a staggering 17 point drop since the last poll. According to PPP, "Trump in the strongest position of any poll we've done anywhere since he entered the race":

To give an idea of how fundamentally the contest has shifted over the last four months none of Trump, Kasich, and Fiorina were even included in the horse race question when we last polled the state in April. The candidate who's made the most cataclysmic drop is Walker- he's gone from leading at 24% all the way down to 7% in this newest poll.

Trump's advantage over the Republican field is thorough. He leads with Tea Party voters (44%), men (39%), independents (36%), conservatives (36%), voters who are most concerned about electability (35%), both younger voters and seniors (at 34% with each), evangelicals (32%), women (30%), and moderates (29%). Trump has a 56/32 favorability rating and he also leads when you match him with the other Republican hopefuls head to head.

The poll also finds former Florida governor Jeb Bush struggling in the state handed a loss to his older brother, George W. Bush, during the 2000 Republican primary. Only 38 percent of Republican primary voters in the state have a favorable opinion of the younger Bush. Not to be out Trumped, however, Texas Sen.Ted Cruz has seen his standing in the poll drop 10 points while Kentucky Sen. Rand Paul has since his support slip 8 percentage points. According the Real Clear Politics poll of New Hampshire polls, Trump enjoys a comfortable 13.7 point lead.

While Trump has been dominating both state and local polls for most of the summer, sitting at a comfortable 26 percent in the Huffington Post poll tracker, a different poll out today does show Trump's most obvious electoral weakness. A new Gallup poll shows that by a 51-point margin, Hispanic voters view him more unfavorably than favorably, giving him the highest net unfavorable rating of any Republican candidate. By a mile.