The one thing Jon Stewart and Chris Christie can agree on: A salute to Bruce Springsteen, on the 40th anniversary of "Born to Run" 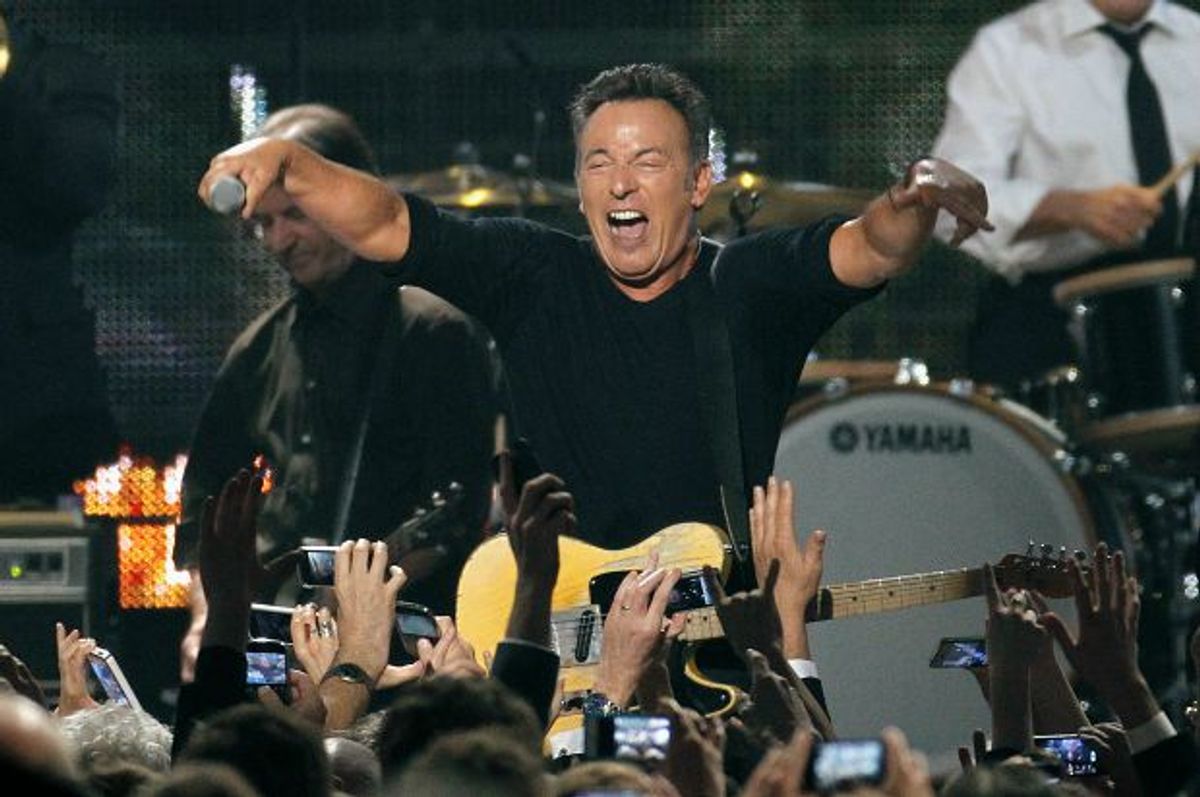 These days, we live in a world that distrusts consensus. Canons are no longer collections of great work, but barricades for privilege. Politics has polarized the nation into warring camps. And given the huge range of options available to us in this delightfully fragmented era of digital wonder, we’re not supposed to miss the old days of the unified “monoculture.” The web's culture of contrarianism means we distrust the term "masterpiece" no matter where it's applied.

But chances are, a lot of people will be listening today and tonight to an album that came out 40 years ago and that manages to seem like both the mainstream itself and something knottier and more interesting. Bruce Springsteeen’s “Born to Run” wasn’t just a near-perfect collection of eight beautifully written and thrillingly played songs, it was the beginning of the heyday of a major figure. That heyday didn’t last forever – they never do – but it was the record that opened up something important.

There were certainly periods during which Springsteen’s blue-collar, back-to-basic, macho-vulnerable style would have seemed out of date or limited: 1975 was also the year of Roxy Music’s “Siren,” Brian Eno’s “Another Green World,” Patti Smith’s “Horses,” Bob Marley and the Wailer’s “Live!”, all of which signaled new musical directions less grounded in the past than the Boss’s retro fantasies. The explosion of punk, and the later emergence of the collegiate, sonically adventurous sounds of indie rock could make the Boss sound narrow or provincial by comparison. There was also a time – in the months after the release of 1984’s “Born in the USA,” when it was hard to escape the title track, “Dancing in the Dark,” and a few other songs – where it would be difficult to imagine anyone wanting to listen to Springsteen ever again.

But these days, Springsteen has become something David Simon (who uses his music in “Show Me a Hero”), New Jersey Gov. Chris Christie (who has a massive unrequited crush on the Boss, who rejects Christie's politics), and Jon Stewart (who brought Springsteen onstage to play a medley including “Born to Run” for his farewell show) can all agree on.

Why has this album been able to become not only a sensation in its time – Springsteen was on the cover of both Time and Newsweek a few months after the record came out – but something that’s stood up so well since?

An excellent Atlantic story puts “Born to Run” in context with the 1970s. “The rise of Bruce Springsteen is in many ways a typical rock success story,” Joshua Zeitz argues, “but it also reveals a great deal about one of America’s most contested eras.” He writes of the ‘70s:

Far from being an era of complacency and narcissism, the decade gave rise to social, political, and cultural debates that built on and even surpassed the era of Kennedy and King… Considered in this context, Bruce Springsteen’s phenomenal breakthrough in 1975 can only be understood against a backdrop of profound dislocation and urgent activism, particularly in the working-class communities that absorbed so many of the decade’s economic and cultural shocks.

So it’s a political album about an embattled white working class, and the dreams of escape – all the lines about the highway “jammed with broken heroes on a last chance power drive” – come from the suffocating nature of blue-collar America at a time in which the U.S. industrial economy was stalling. That’s certainly where much of that album came from, but it ended reaching into an audience that had little in common economically with the heroes of those songs.

At a time when American race relations were strained even more than usual, Bruce’s acknowledged debt to black music, and the symbolism of his appearing with Clarence Clemons on the album sleeve was part of what made the whole thing resonate.

But “Born to Run” also startled people because in the disoriented world of the early ‘70s, a much-hyped artist really came into his own as a forceful and original figure. His word-drunk debut album caused people to take Springsteen as the latest “New Dylan,” and his second record was equally indebted to Van Morrison. These were engaging albums for sure, but from the first lines of the opening track to “Born to Run,” we’ve slipped into the head of a musician who’s both deeply traditional and finding his own purchase on a musical past that includes doo-wop, Roy Orbison, and a lot of forgotten bar bands.

The screen door slams
Mary's dress waves
Like a vision she dances across the porch
As the radio plays
Roy Orbison singing for the lonely
Hey that's me and I want you only.

You can be skeptical of the claim that rock lyrics are poetry and still find very few ways to improve on the lyrics to ”Thunder Road” and most of the rest of what’s on this album. And the E Street Band plays the hell out of these songs.

Where Springsteen went next may’ve been even richer. After three years of lawsuit-enforced silence, he released “Darkness on the Edge of Town,” which extended the themes of “Born to Run” in a way that may be even more powerful. The two-CD “The River” came out in 1980, and musically, it’s more wide-ranging and risky than either. The downbeat, acoustic “Nebraska,” from two years later, is one of the bleakest and least compromising albums any major commercial musician has ever released.

Since then, Springsteen’s releases have been a very mixed bag, with some highlights and more dull patches. But “Born to Run” began a four-album run without too many parallels in rock history. Let’s lift a glass to the Boss tonight and admit that on at least one matter, Chris Christie was right.