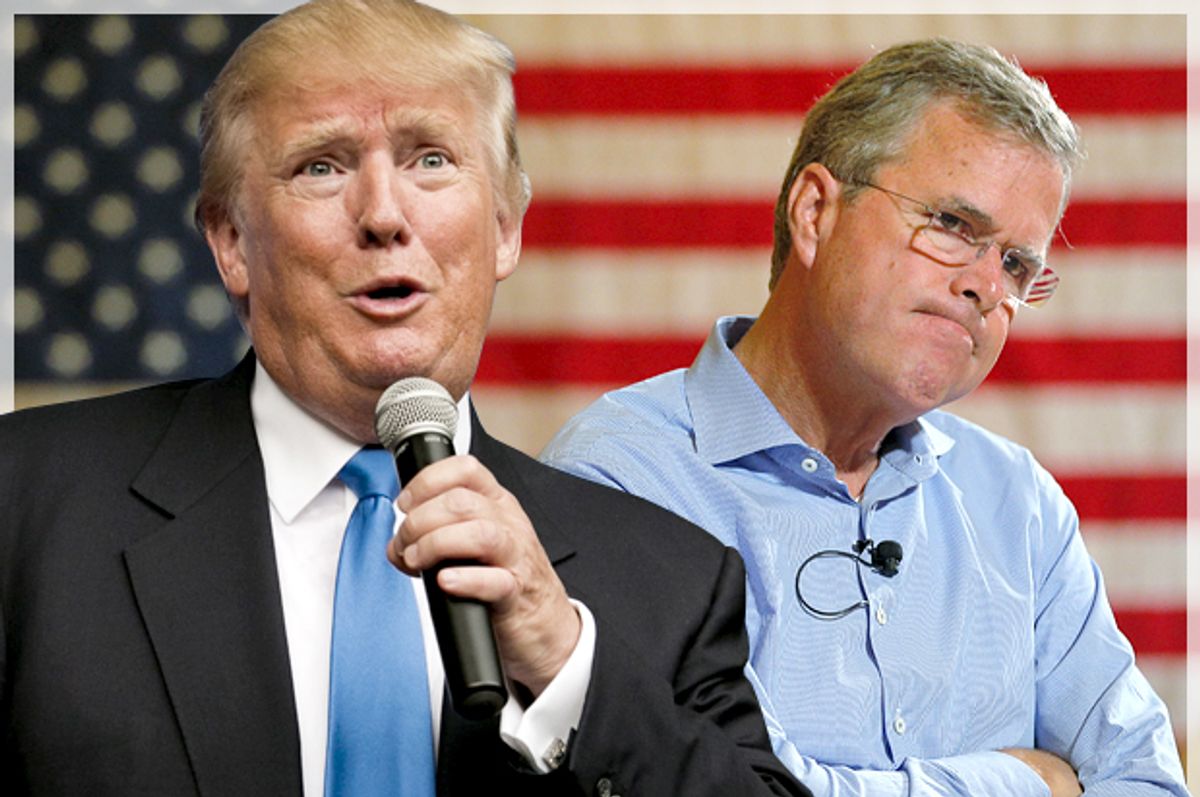 Donald Trump, who claims to be worth $10 billion, is attempting to portray rival Jeb Bush as the preferred candidate of Wall Street, offering a critique of the former Florida governor from the left.

"Jeb is never going to bring us to the promised land. He can’t,” Trump told the Washington Post's Robert Costa and Phillip Rucker in a new interview described as containing 33 jabs at the Bush political dynasty in 35 minutes, or "about one put-down per minute."

“He’s not up to snuff," Trump determined, citing Bush's work after leaving the governor's mansion in Tallahassee as disqualifying: (emphasis added)

Trump was especially accusatory when he talked about Jeb Bush’s work in investment banking. After leaving the governor’s office in 2007, Bush was an adviser to Lehman Brothers and, later, Barclays, earning between $1.3 million and $2 million a year. Trump called Bush’s role at Lehman a “no-show job” and suggested it was a reward for helping direct Florida state funds to the firm, whose collapse in 2008 helped kick off the Great Recession.

“That’s a Hillary Clinton kind of situation,” Trump said, referring to the Democratic front-runner. “This is huge. Let me ask you: Why would you pay a man $1.3 million a year for a no-show job at Lehman Brothers — which, when it failed, almost took the world with it?”

According to the Wall Street Journal, Bush was never an official employee of Lehman, "but was paid to attend meetings, dinners and conferences where he spoke to clients and bank executives."

Trump also recently tweeted a reminder of Bush's past ties to the now-defunct investment firm:

During Bush’s first year working for Lehman, his former colleagues in Tallahassee, the state capital, moved vast sums of Florida pension money into the doomed Wall Street investment bank, even as warnings about its financial troubles began to emerge.

Bush left Lehman Brothers after the firm declared bankruptcy in 2008. He joined British banking giant Barclays as an adviser soon thereafter and held that title until late 2014, when he closed out his business interests in preparation for a presidential run.

On September 15, 2008, Lehman, the fourth largest investment bank in the U.S. at the time, filed for bankruptcy, setting-off a global financial crash. Bush moved on to Barclays.

“I spent a lot of time, I probably spent about 40% of my time working for Barclays,” Bush told reporters in June. “I did a lot of their conferences where I spoke and I interacted with their clients.” His campaign said that Bush was paid $2 million for his services.

In another interview this week, Trump told Bloomberg Politics that his proposed tax reform policy was more in line with Democratic presidential candidate Hillary Clinton's, who he hit for taking campaign contributions from hedge fund managers, than Bush's, noting that he would do away with the carried interest loophole.

"I would take carried interest out, and I would let people making hundreds of millions of dollars-a-year pay some tax, because right now they are paying very little tax and I think it's outrageous," Trump told Bloomberg's Mark Halperin and John Heilemann. "I want to lower taxes for the middle class."

For his part, Bush recently tweeted that Trump was "a tax-hiking democrat," hitting the international real-estate mogul for his past support of liberal policies:

In his interview with the Post, Trump hit Bush's father, former President George H.W. Bush, for raising taxes while in office, noting that he voted for the elder Bush. “I really liked the father — really like him as a person. But I hated his ‘read my lips, no more taxes,’ and then he raised taxes monstrously.”