High heels for babies are a thing: Should the first steps into sexualization happen before girls can even walk? 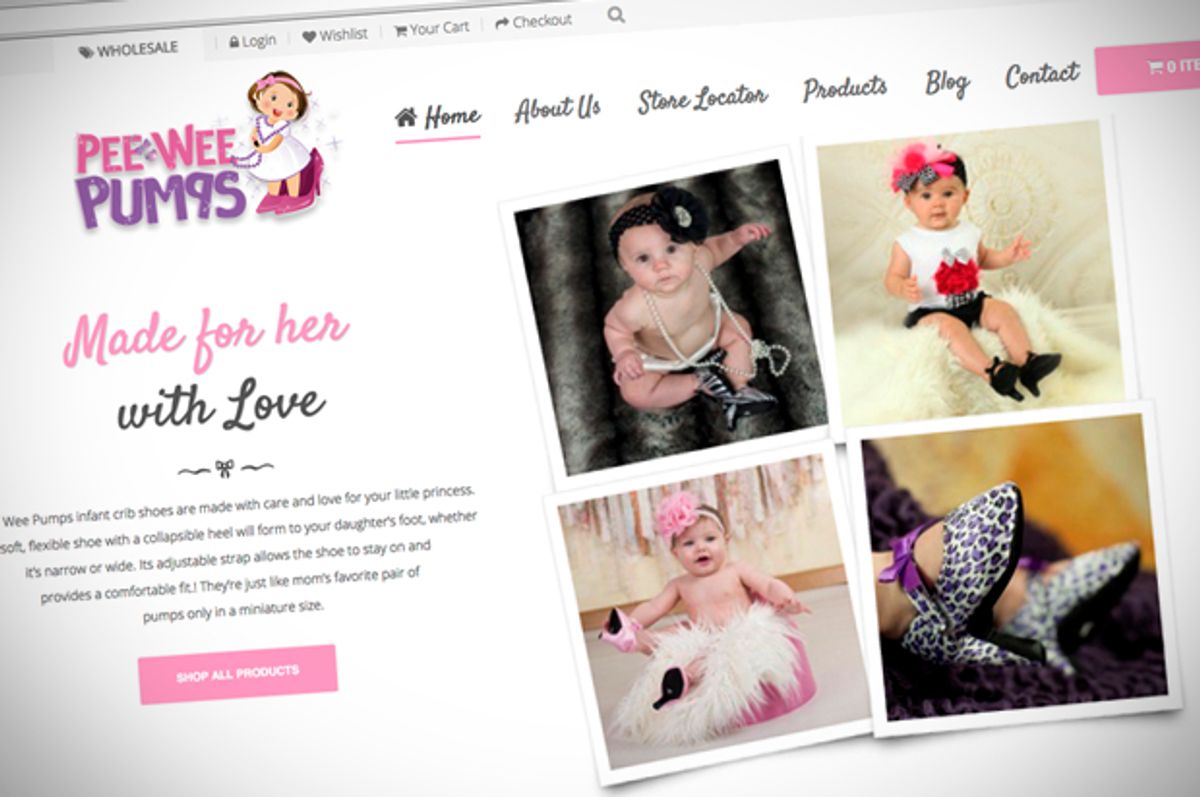 When Coco, of "Ice Loves Coco" reality TV fame, leaves the hospital with her daughter in December, she’s already got the girl’s first fashionista moment planned out. As Entertainment Tonight reported, Coco recently posted on Instagram, “Guess what #ChanelNicole is leaving out of the hospital in? Yep! She already got her 1st pair of heels.”

Those “heels” she’s referring to are several pairs of Pee Wee Pumps, satin crib shoes with a collapsible heel designed for babies ages zero to six months, with names like “Diva,” “Glamorous,” “Swanky” and “Wild Child.” According to the company’s website, “Your little princess will be the belle of the ball with her first fashion statement in her Pee Wee Pumps crib shoes.”

Needless to say, the mere idea of baby high heels, let alone the highly gendered marketing, has caused outrage among many parents. For Adrienne So, mother to a 7-month-old girl, the heels are simply too much. “My baby was trying to stand by six months, and I don’t think weird heel pillows would have helped. She has her whole life to be pinioned down in uncomfortable shoes. For God’s sake, give her at least six months free from high heels.”

For other parents, there’s nothing cute or innocent about these shoes; instead, they’re a symbol of the ways we turn even babies into sex symbols. Rebecca Hains, author of "The Princess Problem: Guiding Our Girls Through the Princess-Obsessed Years," argues that the dangerous messages being sent by Pee Wee Pumps are far greater than they may appear at first sight. “High-heeled crib shoes may seem innocuous. After all, infant girls aren't going to remember having worn them; they're really meant for parents' amusement,” said Hains. “However, it's worth remembering that high heels are meant to be sexy. Girls' sexualization has been harming girls' self-esteem and academic performance at ever-earlier ages. Princess culture—which the marketing of these shoes directly relies upon--contributes to girls' sexualization, as it teaches girls that their primary societal value comes not from who they are or what they're interested in, but from their physical appearance. In this context, putting soft high heels on a baby girl is a step in the wrong direction. There's no good reason for informed parents to be complicit in marketers' efforts to objectify our daughters.”

Eileen Donovan-Kranz, the mother of two daughters, took issue with both the product and how it’s being sold. “To me, as a mom, it's sickening,” she said. “An infant cares nothing about gender and cannot speak for her/himself. The parent is projecting an anxiety about gender from the infant's earliest days on the planet, or making a baby into an attention-magnet for the parent's own needs and/or insecurities. Let a baby be. The shoes are deeply offensive, and the ‘princess’ marketing is only part of a putrid package.”

Even parents of boys care about the issue. Alexis Donkin, who blogs about raising her son in a genderless way (“his sex organs do not dictate what I give him”), took such offense that she said, “I would not want my son to be around a family who did this to their daughter because it implies a certain mindset—hypersexualization, forced gender roles, female submission, and an emphasis on appearance.”

New York-based actress and writer Leslie Kendall Dye’s objections to Pee Wee Pumps are twofold, tackling the child’s physical development and the gendered roles she believes shoes like these convey. “I think it is not only awful and a part of princess culture, but [also] dangerous,” said Dye. “I studied the development of crawling and walking very carefully when I had my baby daughter, because I am a dancer with a torn hip. I came across numerous books that pleaded with parents not to put any shoes on children before they needed them for walking outdoors, and to keep them walking on bare feet to develop their tiny foot muscles as much as possible. I used to take my child's booties off when she crawled around and even walked at the bookstore or library, anywhere where it was remotely safe to have her go shoeless.”

Dye doesn’t see the need for the footwear of a child that young to blare their gender, either. “I am also very opposed to excessive ‘girl’ stuff being imposed on girls, especially when it is their parents' projection,” Dye said. “I loved those early early years where my darling kid liked her hair trimmed short because she hated hair clips and just ran free. I dressed her in dresses, but also lots of comfortable pants for climbing and running and being free. She will be encumbered by society in one way or another soon enough.”

Indeed. The larger question is whether, at a time when gender-neutral clothing for kids is on the rise and Target plans to stop marketing toys by gender, there’s a need to signify such a young child’s femaleness at all. Does a baby too young to know any better require “an extra feminine finishing touch that will take [sic] any ordinary holiday dress that much more stylish,” as a company blog post suggested? I’d venture they don’t.

In an Amazon review that’s hard to distinguish whether it’s genuine or parody, Natalie McNeil wrote of the company’s Diva shoe, “Ever since she was born 4 weeks ago, I have been ashamed of my daughter's lack of femininity. While I've been unable to find suitable hair extensions and make up yet, I do feel better now that she at least has some heels.” It’s not much of a mental leap to envision parents who put these on infants rushing to put less soft heels, the kind that might do actual physical damage to a growing foot, on their kids, especially since Pee Wee Pumps states on their site, “…children are quickly becoming trendy little people destined to grow up a great fashion sense thanks to their parents.”

In response to earlier criticism on Twitter claiming the shoes “improperly sexualize children,” the company stated, “Pee Wee Pumps are meant to be a fun photo pop or cute fashion accessory.” Yet the fact that they state on Amazon that the shoes are “for girls,” that marketing materials pose infants in seemingly glamorous ways and the use of the word “princess” add up to telling girls they are (and by extension, should be) “pretty,” a subject that’s been hotly debated among parents.

Not every mom is up in arms, however. Eve Vawter, Deputy Editor of parenting site The Stir and mom of 4, told Salon via email, “I'm a raging feminist™ and even though I find most of the styles sort of tacky, I would totally put these on a baby. Because babies are stupid; they have no idea what they are wearing. Babies hate wearing things on their feet and I would get at least five minutes of amusement watching a baby try and kick these off. I'm concerned with ‘beauty pageants’ for babies and toddlers, and preteens getting multi million dollar modeling contracts and adult women being judged for what they wear, but I don't feel these goofy shoes are any more problematic than putting a sports teams onesie on a boy baby.”

Even the most staunch objectors, though, probably would find this gender reversal worthy of applause. A mom named T. Alvarez posted on Amazon about putting a pair of Pee Wee Pumps on her 4-month-old son (yes, her son!) for a good cause. “As April is Sexual Assault Awareness month, we were participating in a walk a mile event to raise money for a local non-profit that helps victims of sexual assault, domestic violence and stalking in our community. Men, women and children. We ask people to donate to our team as we walk a mile in ‘her’ shoes,” she wrote. To their credit, even with all their girly marketing, Pee Wee Pumps posted a photo of the boy on their blog.

Yet putting a baby boy in high heels also showcases the ridiculousness of their whole appeal, highlighting, yet again, the way gender is encoded in fashion from birth. Do I think these will do lasting damage to a baby’s identity? No, but I do think parents buying these should consider why their desire to glam up their girls. Is being a “diva,” even a mini one, really something we want to encourage? Because these shoes may be the literal first step in doing so.