Scott Walker doubles down on insane ISIS-union comparison: "I have the capacity to handle pressure" 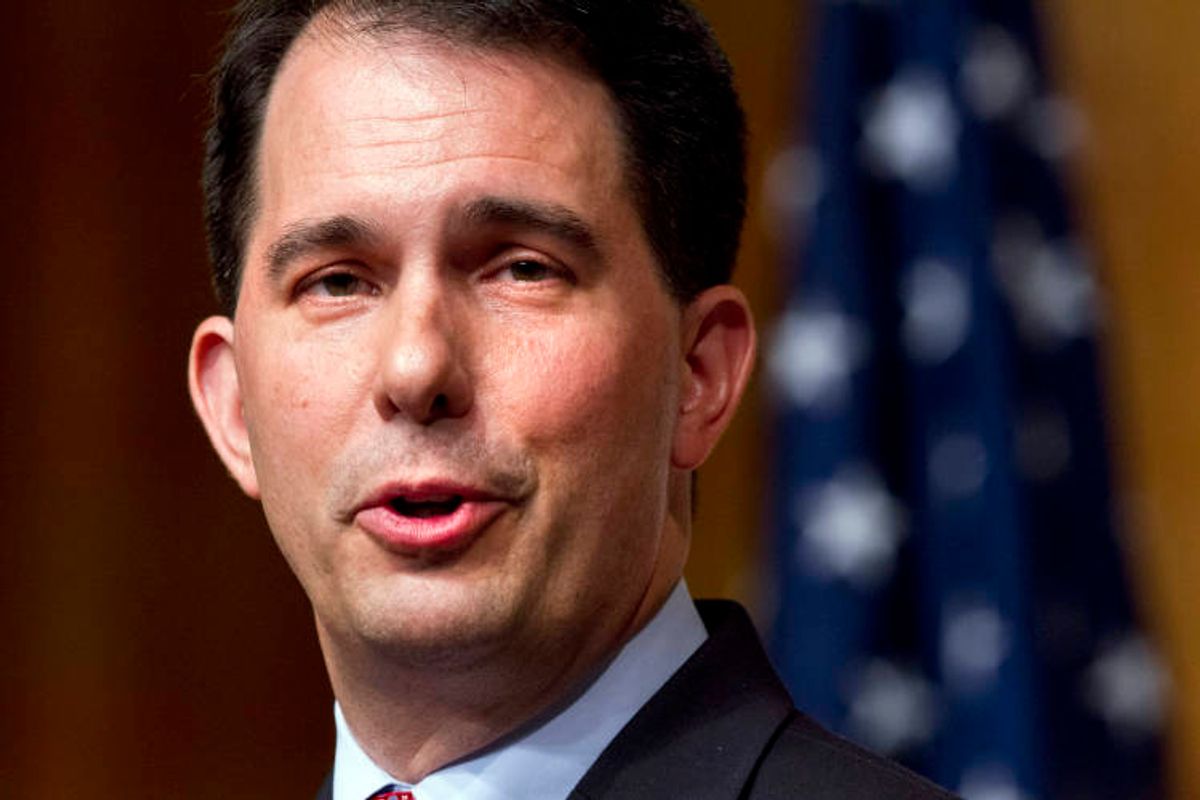 FILE - In this June 20, 2015 file photo, Republican presidential candidate, Wisconsin Gov. Scott Walker speaks in Washington. Walker is facing potentially embarrassing revelations from an agency once billed as the centerpiece of his plan as Wisconsins governor to bring 250,000 jobs to the state. Walker led the Wisconsin Economic Development Corporation until stepping down earlier this month after allegations about shoddy lending and favoritism at the agency. (AP Photo/Jacquelyn Martin, File) (AP)
--

Scott Walker keeps complaining that he was misinterpreted earlier this year when he compared his political battle against unions as governor of Wisconsin to the battle against ISIS. But in a new Bloomberg interview, the Republican presidential candidate doubles down on his initial claim, citing death threats he received from angry Wisconsin residents as proof he has the "capacity to handle pressure," like ISIS.

"If I can take on 100,000 protesters, I can do the same across the world," Walker told a room of conservative political activists at the annual CPAC convention in February, referring to the demonstrations that greeted legislation stripping public employees of collective bargaining rights.

Walker's hyperbolic analogy was made in response to a direct question about his plans to fight the terrorist group, ISIS, as president.

At the time, Walker's campaign was quick to clean up the Wisconsin leader's mess, explaining that "what the governor was saying was when faced with adversity he chooses strength and leadership." Never mind that Walker had reportedly made a similar comparison at New York City gathering of conservative "economists" like Steve Moore, Art Laffer and Larry Kudlow days before. According to Kudlow's own account of Walker's remarks, the governor argued that "his stance against unions in Wisconsin would be a signal of toughness to Islamic jihadists and Russia's Vladimir Putin."

Walker himself explained, in an attempt to downplay his comments, that he was simply remarking on how his experience with Wisconsin unions introduced him to “that kind of pressure, that kind of intensity."

And in a new interview, Walker gets specific about the type of pressure he faced during his fight with Wisconsin unions that he claims prepares him for the fight against ISIS.

"My point was, the kind of pressure that I was under at the height of the protests, with the death threats and everything else, showed that I have the capacity to handle pressure," Walker told Bloomberg in a new interview. "I wasn’t intimidated.”