Tragedy, broadcast live: The Virginia TV shootings and the mass trauma of media used purposefully and violently against us 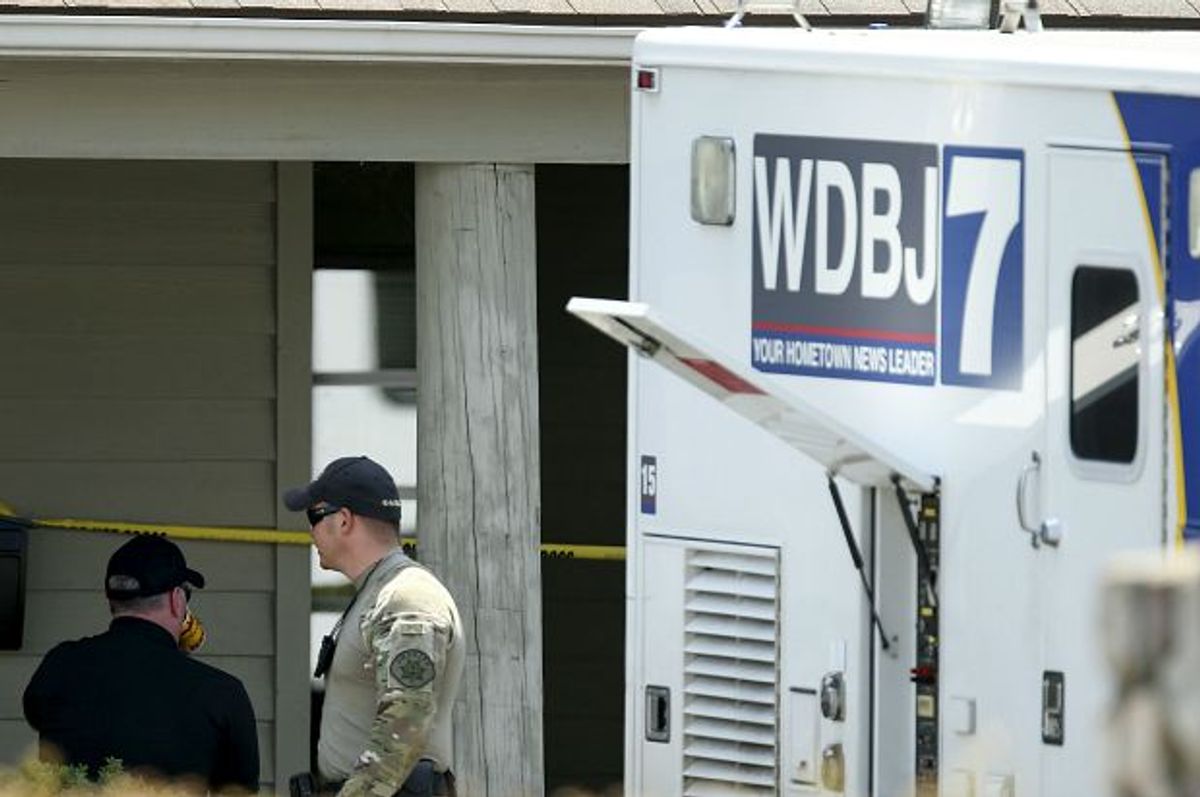 Yesterday, rather than air the slated finale of “Mr. Robot”—a dystopic and cyberpunk episode, appropriately named “eps1.0_zer0-day.avi”—the cable network USA announced that it would hold the finale until the same timeslot next week. NBC Universal, which owns USA, made the following statement:

The previously filmed season finale of ‘Mr. Robot’ contains a graphic scene similar in nature to today’s tragic events in Virginia. Out of respect to the victims, their families and colleagues, and our viewers, we are postponing tonight’s episode. Our thoughts go out to all those affected during this difficult time.

I had a chance to watch the finale on Tuesday evening, just about 24 hours before the episode was supposed to air. At the time, as I told the show’s publicists, I was just hoping to watch the finale so I could get a fuller sense of the season I was about to recommend. On the condition of my promising to them that I would not release plot details before airing, I was able to watch the episode.

We live in a world where, increasingly, things are caught on-camera. By virtue of ubiquity, by virtue of shareability, there are more opportunities to film and disseminate than ever before. And yet what happened Wednesday in Bedford, Va. is different from something just being caught on film; it was caught on film and immediately broadcast to audiences at home, because the murders happened on live television.

TV might now be grouped with film. But at its inception, TV’s forebear was not film, but radio. Because while it might have had the visual component of film, TV attempted to do what only radio had done before—it broadcast something live. There was no time for lengthy editing or to match up sound effects with what was happening on set—so early TV and film cameras are in fact quite different, because they did different things. Theater was the best and only live-action performance; radio, in its heyday, was the only and best way to listen to the vibrating tuning fork of the world. But television married the two, to create what we now think of today as broadcast.

To this day, when we think “live,” we think television. Four letters in a corner of the screen, whether that’s a presidential address, a baseball game, the nightly news, or “Saturday Night Live.” We acknowledge that at times there is a five-second tape delay, a West-Coast feed, a pre-recorded segment or two. But the principle of the thing is the same; even with the invention and popularity of a livestreaming service like Periscope, the creators made sure to add a “.tv” to the end of the URL, just so we’re all on the same page.

Before broadcast, the rest of the world must have felt very far away. If you wanted live-action performance, you had to get up and go to a theater. If you wanted to know the news, from troop movements to the weather, you waited till the next paper came out—morning or evening edition. You could make the argument that in the volatile world of New York City, where “Mr. Robot” is the case, there might always been drama and mayhem around every corner. But especially in the service area of WDBJ 7, the local network where Alison Parker and Adam Ward both worked, the rest of the world would have been slow to make itself known. Even yesterday, Parker and Ward were doing a remote at the Bridgewater shopping and entertainment center, which is on a huge reservoir named the Smith Mountain Lake. There is nothing earth-shattering about that.

And yet the subsequent events of yesterday—of Parker and Ward being shot and killed while filming, by a mentally unstable and disgruntled ex-coworker, who then posted his own video of the events on Twitter, which then led many random users of social media to discover they had video autoplay turned on, and finally culminated in a non-televised suicide behind the wheel of a speeding vehicle and this tasteless cover from the New York Daily News depicting Parker’s victimization—were earth-shattering, not exactly because we’re surprised to see more gun violence in this country, but because the media we live and work with was used suddenly and violently against us. Watching live became not a privilege but a traumatic burden. Social media and its autoplay became not a convenience or an advertising vehicle but another way of amplifying the violence for its perpetrator. We live in a networked world; we know the killer waited until his victims were on-air before he started shooting.

“Mr. Robot,” as I wrote yesterday, is also deeply concerned with the matter of our networked world. The show is more invested in our economic codependence and our total lack of privacy; a murder like the one in Virginia is too senseless, too meaningless, to be part of “Mr. Robot”’s area of interest. And indeed, there is just one area of overlap between anything that happens on the urban, gritty, conspiratorial drama and anything that did occur yesterday in Virginia; it was live. In the as-yet-unaired finale, a previously unmet character chooses to commit suicide on-air, in a manner that is much more evocative of the strange and terrible suicide of Pennsylvania politician Budd Dwyer than it is of what happened in Virginia. It is also somewhat ironic that this scene is the one that would prevent the finale from airing this week; though it’s a powerful scene, it could be lifted out of the finale without altering the story.

The USA network might do just that. In the annals of hedging your bets around tragedy, pushing off a premiere for another week is the least likely to cause future problems. The extra time would be enough to recut that scene—either to make it less gory or to minimize its on-screen time entirely.

My personal opinion is that it’s not necessary; it’s not that the scene is so graphic, especially compared to what’s typically on television nearly every hour of the day (and online, too). It was smart for the network to have erred on the side of acknowledging tragedy, instead of ignoring it.

And in acknowledging the tragedy, the network acknowledges something else—that this is a television problem. The story of Alison Parker and Adam Ward hit harder, and hit home, because we could watch it happen; in a final act of perversion, the murderer found a way to “hack” the way we do Twitter and TV and news all at the same time, to bring the horror even closer.

If you enjoy “Mr. Robot,” I hope you will watch the finale next week, on September 2. It is gripping and well-executed. The show has impeccable instincts about the image-saturated network we live in; and well before yesterday’s tragedy, it perceived our individual and collective vulnerability around the unpredictable and electric space called “live.” “Live” is an extremely unfortunate word, when it turns out you can kill people on-air; but then, that’s the point. “Live” is the media space where we meet each other, and anything, unfortunately, can happen.