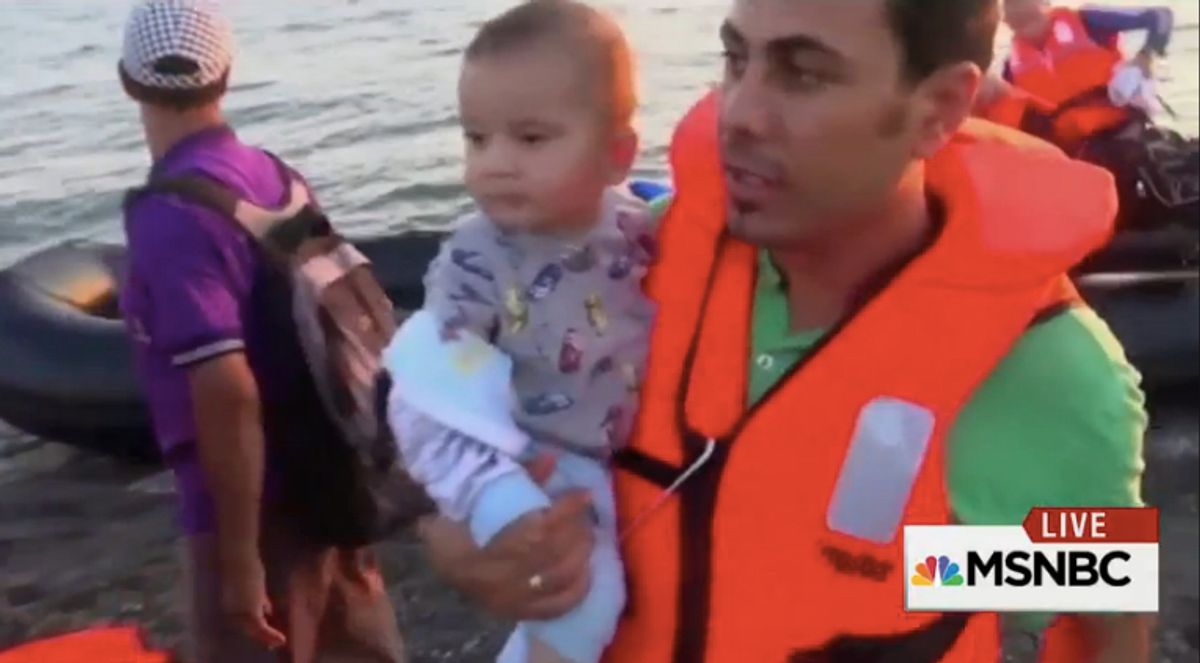 A disturbing image of a young Syrian child lying face-down on a beach after the boat his family was fleeing to Greece on capsized, has jolted the world's collective attention on the long-simmering crisis of refugees desperately fleeing the Syrian civil war and on Wednesday's edition of her show, Rachel Maddow examined the different ways European countries have reacted to the arrival of thousands of families seeking refuge within their borders.

"It feels like it is breaking Europe," Maddow admitted to her guest, David Miliband, the former British foreign secretary, and now president and CEO of the International Rescue Committee. The host noted the contrast between the governmental reactions of Europe's first and second largest economies, Germany and England. Germany has agreed to take in 800,000 asylum seekers just in the remainder of 2015, while the British prime minister recently denied that taking in more refugees would be helpful.

Maddow attributed the difference in attitude, in part, to the difference in media coverage of the crisis: "This difference, this very stark difference playing out on the front cover of two of this country's major newspapers. One the left is the front cover of Germany's 'Daily Bild.' It shows two young refugees with the headline, 'We Help.' On the right in Britain, 'The Daily Express' says, 'Migrants swarm to Britain.' Swarm." Miliband, explained the importance of language in discussion of refugees:

The fact that the idea of a refugee, the status of someone who has a well-founded fear of persecution, which is the definition of a refugee and international law, that's being muddied, that's being diluted, it's being undermined in this talk of -- well, migrants who chose to come for economic reasons.

It's really important to say to people,this isn't about being politically correct. It's about being correct. That a refugee is fleeing persecution, an economic immigrant I would prefer to say, rather than migrant, is seeking a better life. It's not that one is good and one is bad, but they're different.

And the refugee has rights in international law, rights to protection and responsibilities from governments that need to be upheld. And one of the fundamental challenges now is to ensure the very notion of a refugee is not lost in the talk and the headlines about a migrant crisis.

And after Maddow mentioned the noble gestures of thousands of individuals across Europe who have offered assistance to displaced peoples as their governments squabbled in disagreement, Mr. Miliband noted the United States' lackluster response to this most recent humanitarian disaster:

Historically, America has been the leader of refugee resettlement. I don't want to throw too many figures at you, but if you -- the record last year, 20 million refugees around the world. Those who resettled in richer countries, about 150,000 or so. The U.S. takes 70,000.

But the record from Syria, I'm afraid does not amount to leadership. The United States since the Syria conflict began has taken 1,234 Syrian refugees. So, more or less 250 a year. The State Department announced a target of 5,000 to 8,000 in 2016.

But that is way below the kind of leadership that's needed for America to play its historic role, never mind to compare with the German reaction of 800,000 asylum seekers and refugees. OK, it's our responsibility. We'll take them.

Watch the discussion of what Maddow describes as "the world's most serious issue," via MSNBC: