For years, the likes of Rush Limbaugh have lobbed racist, sexist invective at the First Lady. But it didn't matter 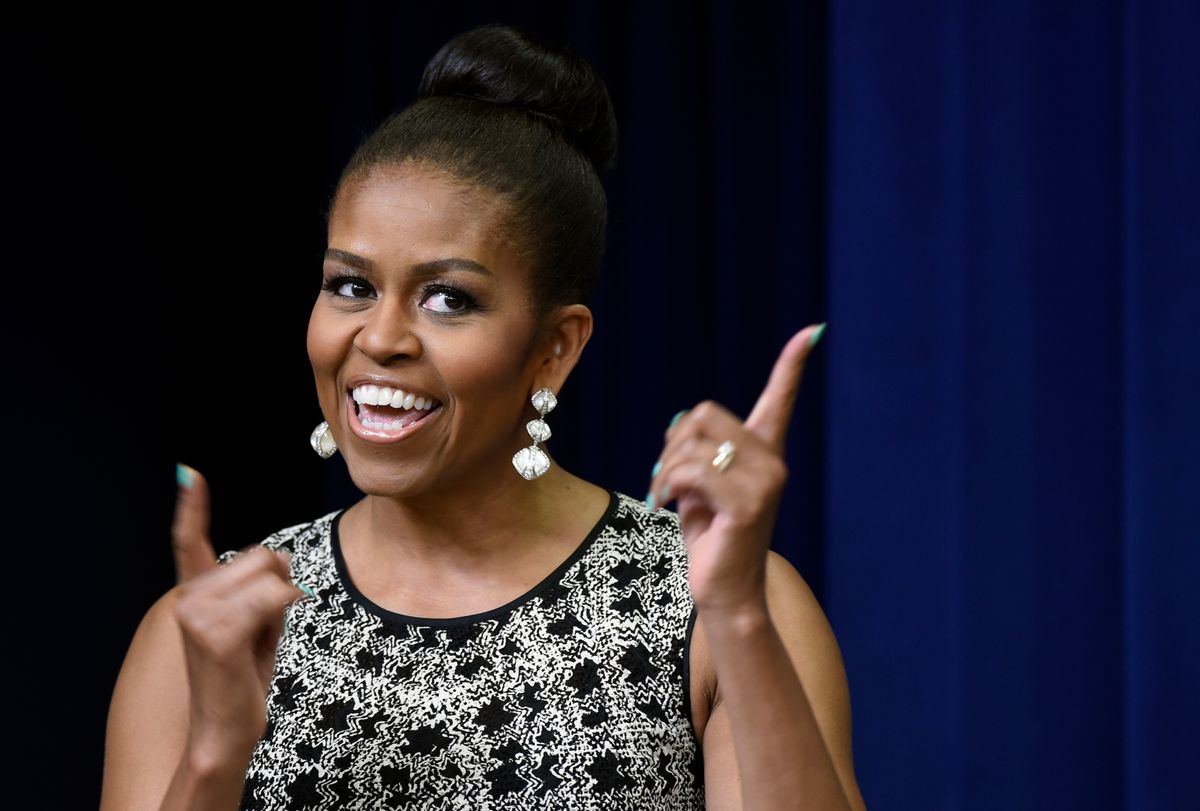 First lady Michelle Obama speaks to a student in the audience at the Celebrating Innovations in Career and Technical Education (CTE) event in the South Court Auditorium in the White House complex in Washington, Tuesday, June 30, 2015. Obama recognized students and educators for their work connecting the classroom to real-life career opportunities. (AP Photo/Susan Walsh) (AP)
--

From the moment Michelle Obama burst on to the national scene back in 2008, she inspired a level of right wing loathing only slightly less intense than that visited on her husband. Indeed, there have been times it has seemed as though they hated her even more. Recall that in the 2008 campaign, she was excoriated for saying,"for the first time in my adult life, I am really proud of my country, because it feels like hope is finally making a comeback." Conservative commentators such as the Weekly Standard's Bill Kristol tut-tutted her comments and offered sage advice:

"You have to be careful not to let that slide into a kind of indictment of America. Because I don’t think the American people think on the whole that the last 25 years of American history is a narrative of despair and nothing to be proud of.”

What a difference seven years makes. The current GOP front runner, Donald Trump's, entire campaign is based upon a "narrative of despair" in which America has become a dystopian hellscape led by fools and idiots. He says, "they’re up here, we’re down there. Our leaders are babies…our country is falling apart," and it's all good. But then he isn't Michelle Obama.

Obama has been an exemplary first lady and is extremely popular with the public, having shown good humor and style throughout her tenure; so it's been very difficult for the right to find anything to criticize.That hasn't stopped them, of course. There is nothing even remotely controversial about her work with military families, a constituency they feel belongs to them, so anything they might pounce on there is an unlikely target for GOP ire. But this mother of two daughters having the temerity to initiate a program to encourage kids to eat healthy foods and exercise has sent them into fits of hysteria.

Think about that: Something adults have been doing since the beginning of time --- telling kids to eat their vegetables and go outside to play --- is a Marxist plot to destroy the fabric of our civilization. Here's an example from Media Matters of the commentary from noted health and fitness expert Rush Limbaugh:

LIMBAUGH: Michelle My Belle, minus the husband, took the kids out to Vail on a ski vacation, and they were spotted eating and they were feasting on ribs, ribs that were 1,575 calories per serving with 141 grams of fat per serving. Now I'm sure some of you members of the new castrati: "This is typical of what you do Mr. Limbaugh, you take an isolated, once in a lifetime experience, and try to say that she's a hypocrite." She is a hypocrite. Leaders are supposed to be leaders. If we're supposed to go out and eat nothing -- if we're supposed to eat roots, and berries and tree bark and so show us how. And if it's supposed to make us fit, if it's supposed to make us healthier, show us how.

The problem is -- and dare I say this -- it doesn't look like Michelle Obama follows her own nutritionary, dietary advice. And then we hear that she's out eating ribs at 1,500 calories a serving with 141 grams of fat per serving, yeah it does -- what do you mean, what do I mean?

What is it - no, I'm trying to say that our First Lady does not project the image of women that you might see on the cover of the Sports Illustrated Swimsuit Issue, or of a woman Alex Rodriguez might date every six months or what have you. I mean, women are under constant pressure to look lithe, and Michelle My Belle is out there saying if you eat the roots and tree bark and the berries and all this cardboard stuff you will live longer, be healthier and you won't be obese. Okay, fine, show us.

Needless to say she's not telling people to eat bark or that the unemployed and their kids should try to get some drips of papaya juice at the mall while she and her girls eat ribs. All the woman is doing is trying to do is raise awareness about childhood obesity and fitness. It's really not revolutionary. In fact, one of Rush's main squeezes , Arnold Schwarzenegger, made a whole career out of this stuff before he entered politics. It's a sad comment on our times when the first lady can't even promote child nutrition without the right wing treating her as if she's fomenting a revolution in the streets.

Rush wasn't the only one. Back when she was still a big GOP star and presumptive presidential candidate, Sarah Palin was very upset over a speech Obama gave in which she talked about how things were different when she was kid:

"In the afternoon, there was no way we'd be allowed to lie around the house watching TV. Our parents made us get up and play outside. As I tell my kids, dessert is not a right."

That shocking comment, made by virtually every mother who ever lived on this earth, garnered this response from Governor Palin:

While making s'mores at one point during Sunday's [reality show] episode, the former Alaska governor proclaims the marshmallow and chocolate treat is "in honor of Michelle Obama, who said the other day we should not have dessert."

It's not the first time Palin has taken a jab at Mrs. Obama over her campaign to discourage fattening foods, especially from public schools. The former vice presidential nominee told conservative talk radio host Laura Ingraham last month that "the first lady cannot trust parents to make decisions for their own children, for their own families in what we should eat."

Palin also hand-delivered cookies to a Pennsylvania school last month before delivering a speech there, saying: "Who should be deciding what I eat? Should it be government or should it be parents? It should be the parents."

And that was the end of the first lady's plans to deploy SEAL Team 6 to go door to door and confiscate every Ding-Dong and Snickers bar they could find, and then force feed the crying little children turnip cake and kale juice.

Those two puerile examples from Limbaugh and Palin illustrate the level of elite conservative commentary we've seen since Obama introduced the program. You don't even want to imagine what the fever swamps have been saying.

That didn't stop Michelle Obama, however. The program's modifications to school lunches and cooperative agreements with restaurant chains and grocery stores has been successful, despite Fox News relentless flogging of anecdotes about kids throwing away their lunches (another unprecedented activity never before documented in human history).

Unfortunately, the Republicans haven't stopped either and they plan once again to try to reverse the new nutritional guidelines. But this time they are getting pushback from some very big players: the food industry, which is making a lot of money selling the ever-so-slightly-more-healthy products under the new regulations, things like whole wheat cinnamon rolls and cereals without artificial colors. And they see no reason to turn back. They are furiously lobbying Congress to leave the guidelines in place.

Sadly, Michelle Obama is forced to take a back seat in this fight because apparently her mere presence makes Republicans lose their faculties, but her feelings probably aren't hurt. These huge conglomerates are still serving junk, it's just slightly better junk than it was before. But that's better than nothing. If the Republicans had their way, kids would be gorging on Cheetos and Coke and sitting in front of the TV all day watching "Duck Dynasty" marathons. Instead, the USDA reported this week that The Healthy, Hungry-free Kids Act is helping to lower childhood obesity rates. Because of this act, the USDA says kids are eating roughly 20 percent more fruits and vegetables in their lunches each day, up substantially from five years ago.