"We need to teach kids to overcome diversity!": Megyn Kelly gets more than she bargained for when #AllLivesMatter advocate goes off the rails

"There's somebody else behind closed doors, pulling the strings, actually causing racism in America," he said 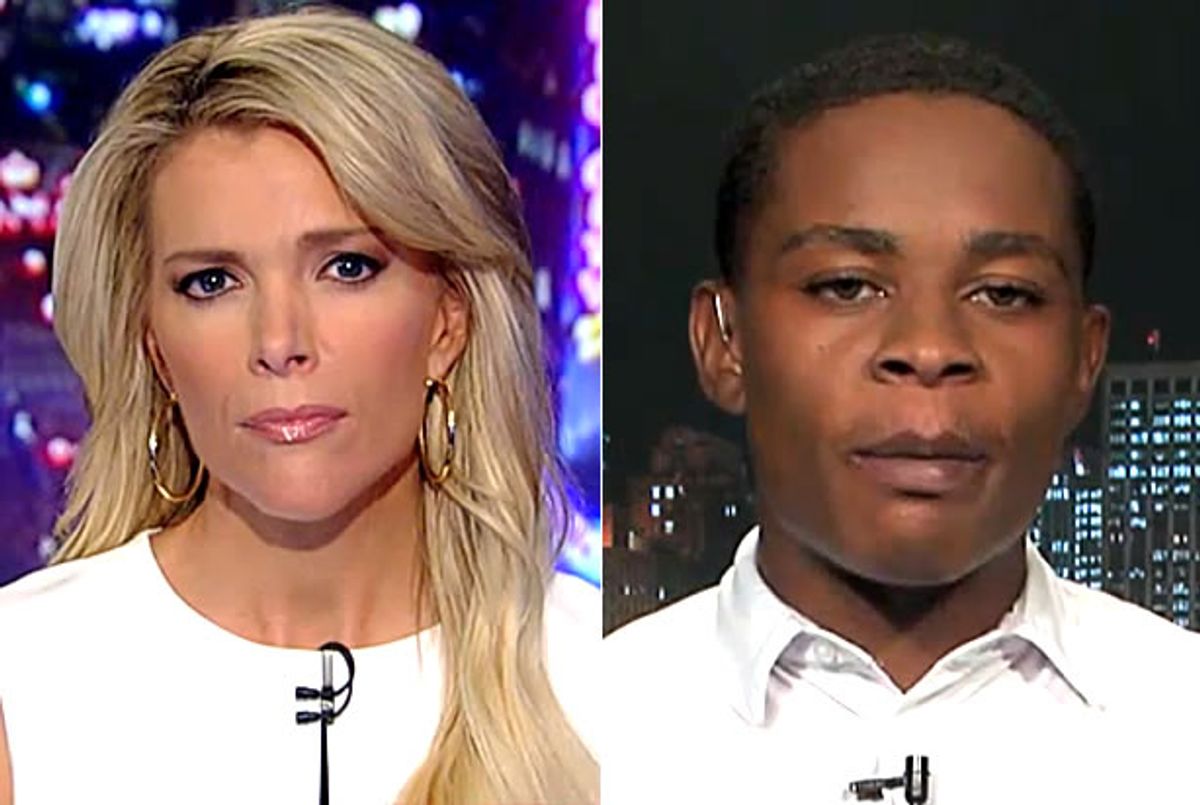 In the video, Whaley accused the movement of "encouraging black people to kill white people" -- encouragement to which he attributed the murder of Officer Darren Goforth in Houston last Friday. That wasn't the only Fox News talking point/marching order Whaley indulged in, as he also claimed that "black people can't accept the truth about themselves," and need to focus on the fact that "all lives matter."

Given that Whaley's video essentially repeated everything that Fox News' white hosts and guests have been arguing for weeks now, it's not surprising that Kelly's producers booked him for an appearance. After all, there's just something different about him that could lend their arguments the appearance of greater credibility. But back to the interview with Kelly, in which Whaley briefly recapitulated his/their argument before noting that the black community is even more complicit in its own destruction than Kelly assumed.

"What about the 'no snitch rule'?" Kelly asked. "This was the first I've heard about that, for why black people in the inner cities don't speak up more about black-on-black crime."

Whaley expressed disbelief, saying "the 'no snitch rule,' you know, you've probably heard of it before, so I don't understand why you say it's your first time hearing about it. There's been a 'no snitch rule for a long time."

"But in this context, it was new," Kelly clarified, wholly unconvincingly. Even if she had heard of the rule, the fact that she hadn't thought about the context of the black community enough to consider its implications in this context speaks volumes about the depth of her concern with the plight of black communities in the inner city.

Her inability to make this simple, obvious connection seemed to unnerve him, so after explaining the rule to Kelly, Whaley went on a bizarre rant that began by noting that Jesus' people had him crucified, but he loved them anyway, and ended by him asserting that "black people and white people aren't enemies, there's somebody else behind closed doors, that's actually pulling the strings, that's actually causing racism in America." He didn't specify who this someone or someones is, but from the look on Kelly's face, she was clearly afraid he was going to name names. Instead, Whaley veered off in yet another direction.

"It starts with education," he argued, "we need to teach our kids to overcome diversity, to accept criticism of our races. The #BlackLivesMatter movement is encouraging black people to throw away their lives for something most white people of this generation weren't a part of, and can't control. That's history, let's not look at the negative things in history. History tends to repeat itself."

At this point, an uncomfortable Kelly had tried to cut him off three or four times, and finally did so successfully, saying "I hear you, I hear you. We appreciate you coming on, telling us your perspective."