"Give me your tired, your poor, your huddled masses": The migration catastrophe, climate change & the new normal

Climate disruptions are going to make crises like this more common. We may look back on 2015 with honeyed nostalgia 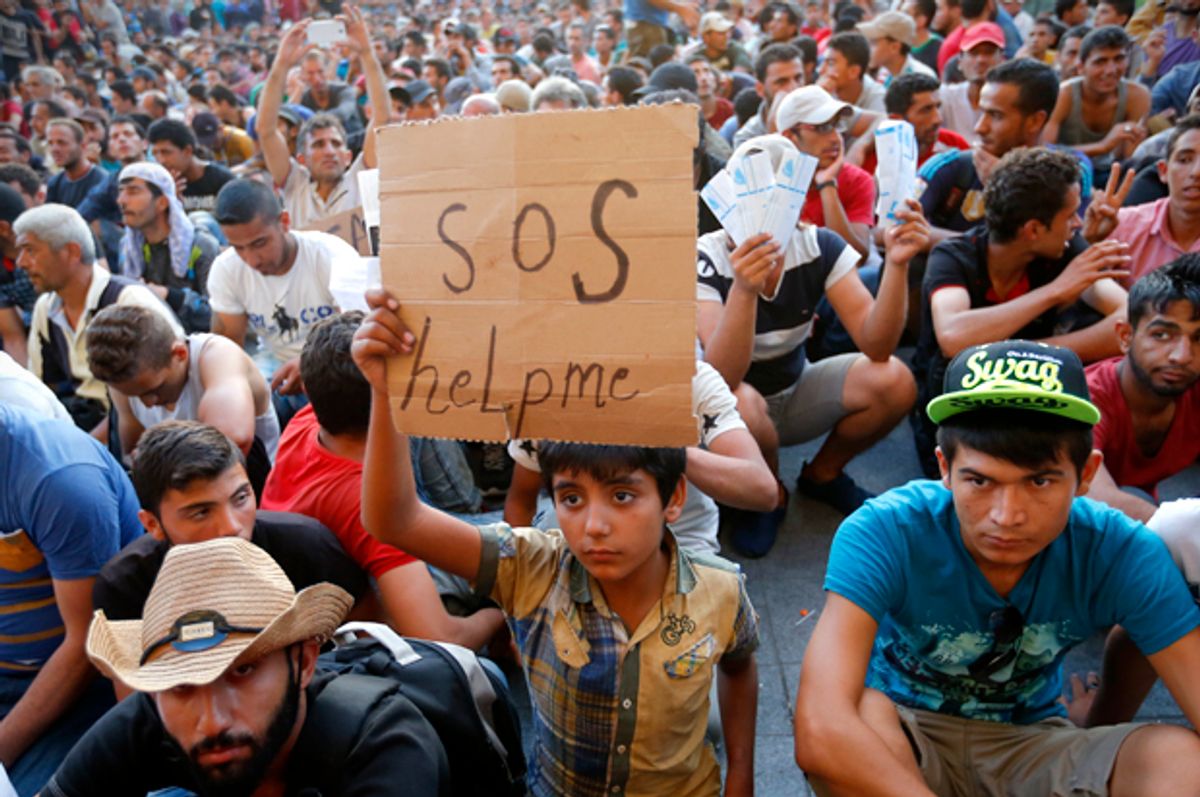 The other morning, two news stories over the radio, one hard on the other, got me to fuming and, presently, as sometimes happens as I calm down, to thinking. The first was a report on President Obama’s global warming address at the Glacier conference in Alaska in which he pointed out (unobjectionably, one would have thought), among other things, how  “Climate change is no longer some far-off problem. It is happening here. It is happening now. Climate change is already disrupting our agriculture and ecosystems, our water and food supplies, our energy, our infrastructure, human health, human safety -- now. Today. And climate change is a trend that affects all trends -- economic trends, security trends. Everything will be impacted. And it becomes more dramatic with each passing year.”

The second was a report from Europe on the current migration crisis—and specifically from Iceland, which, like many European countries, has only agreed to take in a scandalously low number out of the current tide of desperate Syrian refugees—in Iceland’s case, 50, to be exact.

The stories are, of course, linked.  As has often been noted, the pressures of rapidly proliferating desertification both in the Middle East (Iraq and Syria, to be specific) and in Northern and Saharan Africa (Libya and Senegal and Somalia and the Central African Republic, to cite just a few) have been at the root of many of the terrible conflicts and economic collapses that have been overwhelming those lands, precipitating the tidal migrations that have ensued. President Obama noted as much in his speech. (The same climate disruptions, for that matter, stand to melt many of Iceland’s own glaciers.)

But accepting only 50 refugees out of a population of—what?—320,000?  That’s one person for every 6,400 Icelanders.  Pretty cheesy, I found myself thinking, pretty skimpy (talk about trying to be an island unto oneself!).

But how about us, I went on to ponder: you know, the United States (land of “Give me your tired, your poor, your huddled masses yearning to breathe free, The wretched refuse of your teeming shore.  Send these, the homeless, tempest-tost to me”)?  How were we doing by contrast?  The United States, a country of 323 million, has currently agreed to take in 12,000 Syrian refugees.  Which is one for every 26,900 current Americans. (OK, that’s from a total refugee quota this terrible year of 70,000, which would bring the figure to one per 4,600.  Still nothing to crow about.)

As opposed to Germany—the current gold standard in this regard—a country of 80 million, which has agreed to take in 800,000, which is one per every 100 current citizens.

And it’s not as though we here in America couldn’t afford to be much more generous than we are being.  Just look at Detroit, for example, a city in an area with an already well-established Arab community, which has lost more than 60 percent of its population over the past few decades and features a housing stock with literally tens of thousands of abandoned homes and lots. Couldn’t Detroit stand to take in a good hundred thousand, and our country as a whole at least as many Africans and Syrians and Iraqis as Germany (a country with one-sixth our population) has managed to do.  One thing the Germans seem to understand is that far from cratering the local economy, hardworking and taxpaying immigrants often propel it forward.  (Just look at the borough of Queens, which is veritably leading the current upsurge in New York City’s economy.)

The wider point, though, is that what we are seeing this year is not going to prove an especially unusual crisis in terms of the decades ahead. Indeed, what with the predicted increases in global warming effects in coming years (no matter how effective global leaders prove in their efforts at the coming Paris conference), we may soon look back on 2015 with honeyed nostalgia.

And how should we begin to think about these widening, cascading crises—the new normal.  Of course one might imagine that the age-old maxim “Do unto others as you would have them do unto you” (the dictum at the core of almost all of the world’s faiths and philosophical systems) might offer a good guide.  But it seldom seems to.

Perhaps, though, the time has come to recast that maxim. Not so much, “Do unto others as you would have them do unto you” as “Do unto others as you hope that they or someone like them may soon have the option of doing unto you.”  For the key thing to realize about global warming is that we are in fact, as has been noted, looking at a future of global climate weirding. We can expect all sorts of unexpected and unpredictable calamities: hurricanes and tornadoes where they never occurred before, droughts of unprecedented duration (here's looking at you, ever so nativist Phoenix), floods in the heretofore mildest of climes, water wars and other resource conflicts. Iceland, for its part, for example, may yet have to deal with a collapse or rerouting of the very Gulf Stream that currently makes the place inhabitable. In that context, it is gratifying to note that common Icelandic citizens, in their thousands, are bucking their government’s example by offering up rooms in their own homes for many of the currently tempest-tost. Alas, nothing similar is yet happening here in the United States (here's looking at you again, Phoenix).

It is time, it is past time, for a deep conversation about our obligations to our fellow humans, if nothing else in the context of our hopes for ourselves and our own children: the roots of high selflessness intertwining at long last with those of basest self-interestedness. The new normal, indeed.