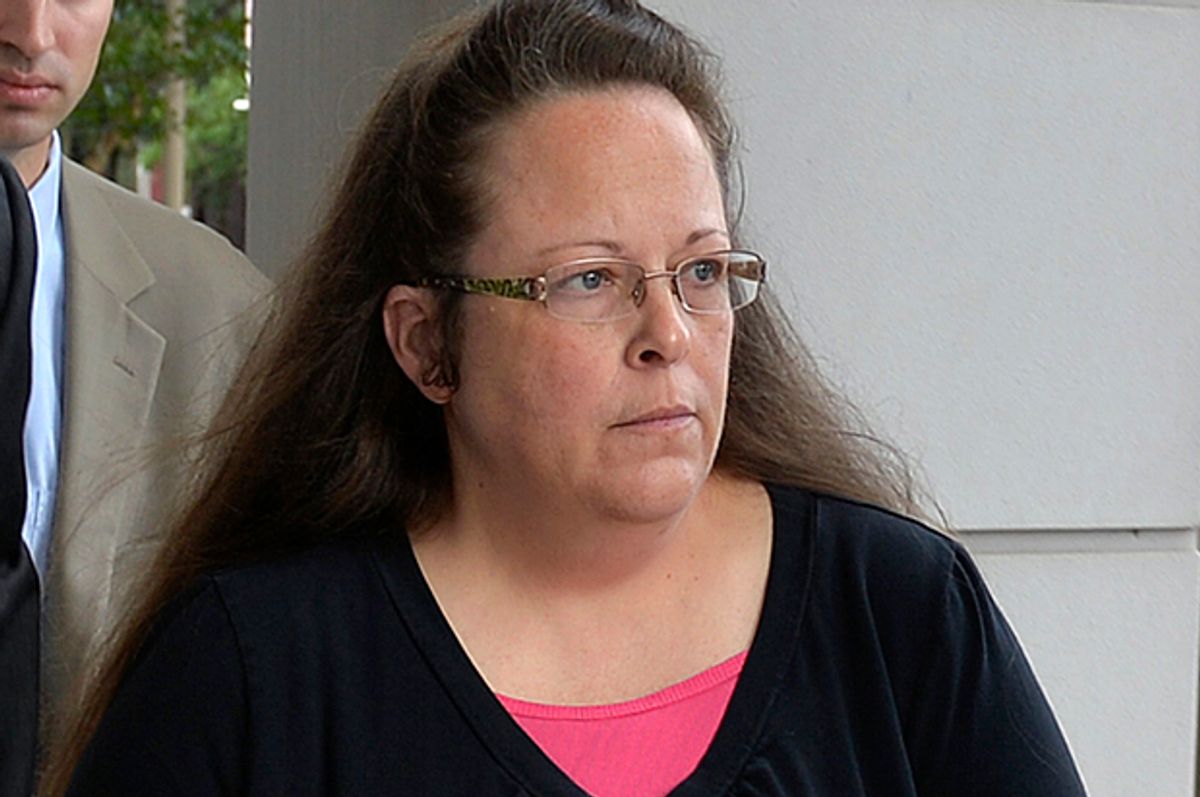 If someone were to hold a gun to my head and force me to vote in the Republican primary, I'd first attempt to desperately wrestle the gun away. But, short of that, I'd probably go ahead and vote for Lindsey Graham.

I hasten to underscore that I vigorously disagree with Graham on a wide range of issues, especially his interventionist posture on Iraq and the broader Middle East. Although from what I've witnessed, especially throughout the Republican nominating process, Graham has comported himself at least as a man of integrity. Not for nothing, but he appears on the surface to be a nice enough guy -- at least compared with his GOP colleagues who mostly drive one to violent profanity-strewn outbursts.

This week's big story is the saga of a Rowan County, KY, clerk Kim Davis, who was jailed indefinitely Thursday by U.S. District Judge David Bunning for refusing to issue marriage licenses to same-sex couples in compliance with an earlier court order. Davis will remain in federal custody until she agrees to issue the appropriate licenses. Last month, meanwhile, a Texas clerk named Katie Lang was hit with a court settlement to the tune of $44,000 in damages and legal fees for refusing to issue a license for a gay couple. But it clearly wasn't punitive enough to scare Davis who's clearly acting in contempt of Judge Bunning's order.

Davis believes that by issuing the licenses she'll be condemned to Hell. Of course her perceived biblical trespass is ridiculously cherrypicked, as it always is. Homophobes like Davis seem to only zero-in on Leviticus and a few letters written by the apostle Paul. (Regarding the latter, and briefly put, Paul was merely recruiting pagan gentiles to the ascetic Christian lifestyle. Paganism often included sex acts in temple rituals, so naturally converts would have to reject those old forms of worship. Paul, by the way, in Romans, also expressly forbid debating, boasting, deception, being unmerciful and wine-drinking. That'd be a quintuple Hell-worthy condemnation for John Boehner. It's also worth noting that the terms "homosexuality" and "same-sex marriage" were anachronistic in the ancient world, making it impossible for the Bible to explicitly condemn either.)

Incidentally, it's come to light that Davis has been divorced three times and married four. So much for the sanctity of marriage. And in the various video clips and photos of Davis, she's clearly wearing two types of cloth at the same time, which is a direct violation of God's decree in Leviticus 19:19.

The bottom line here is that Davis works in the public sector and therefore is forbidden by the establishment clause of the First Amendment from imposing her (blindingly contradictory) faith on the public. Naturally, she's also acting in defiance of the Supreme Court's decision in Obergefell v. Hodges. My cynical side tells me there's more to Davis' motives. She's already been lionized by the bigoted far-right, with at least two GOP presidential candidates rushing to her support, so it's not unfair to speculate that she's gripped by the lure of national attention.

To wit: Mike Huckabee personally called Davis to offer his encouragement and, naturally, his prayers. Meanwhile, Rand Paul said that Davis' actions are indicative of the "American way." Paul went on to say:

"I think one way to get around the whole idea of what the Supreme Court is forcing on the states is for states just to get out of the business of giving out licenses," Paul said. "Alabama has already voted to do this, they’re just no longer going to give out licenses. And anybody can make a contract. And then if you want a marriage contract you go to a church. And so I’ve often said we could have gotten around all of this also in the sense that I do believe everybody has a right to a contract."

This is bizarre given how Paul is one of the most vocal supporters of states' rights -- letting the states take control of nearly everything. Then again, he's such a notorious flip-flopper that he makes Mitt Romney look like a steadfast pillar of unwavering integrity.

Speaking of which, let's return to integrity. A third presidential candidate, Lindsey Graham, also weighed in on the Davis story, but not in the way you'd expect from a conservative Republican. It turns out Graham said exactly what any sane, rational human being might say.

"As a public official, comply with the law or resign," Graham told clerk Kim Davis [...]

"The rule of law is the rule of law," Graham said. "We are a rule of law nation. And I appreciate her conviction, and I support traditional marriage, but she’s accepted a job where she has to apply the law to everyone and that’s her choice."

Okay, that was precisely the correct reaction to the story. (Except, of course, the thing about supporting traditional marriage, but nobody's perfect.) What's more noteworthy, however, is that Graham said this in total defiance of both his party and his congressional delegation, each of which routinely scrambles over itself to pander as much if not more to anti-gay Americans as it does to racists and sexists. Additionally, Graham had the guts to say it to one of the top-shelf nationally syndicated conservative radio hosts, Hugh Hewitt. The liberal equivalent might've been, for example, Elizabeth Warren hypothetically defending the NRA on "Real Time with Bill Maher.

No wonder Graham is losing badly in a GOP presidential field populated by goofballs, racists and over-paid comment trolls. While he's not going to win any popularity polls on the left, there are two things any liberal ought to be able to say about Graham: (1) He obviously possesses at least a modicum of integrity that's unmatched by the majority of his colleagues; and (2) he appears to be one of the few remaining national politicians who, at least in the here and now, hasn't sold out to the inchoate screeching and personality politics of the Tea Party and Fox News Channel. And that's a real accomplishment, given the strong incentives in the other direction.

In the blurting culture of Trump-era politics we need more leaders like Graham who are willing to take the rational high-road rather than dutifully falling in line with the fire-eaters, extremists and carnival geeks of his party.