Dick Cheney's savage revisionist history: inside his disturbing campaign to twist the facts of Iraq

Dick Cheney is no stranger to defending the indefensible. But lately he's been even more aggressive than usual 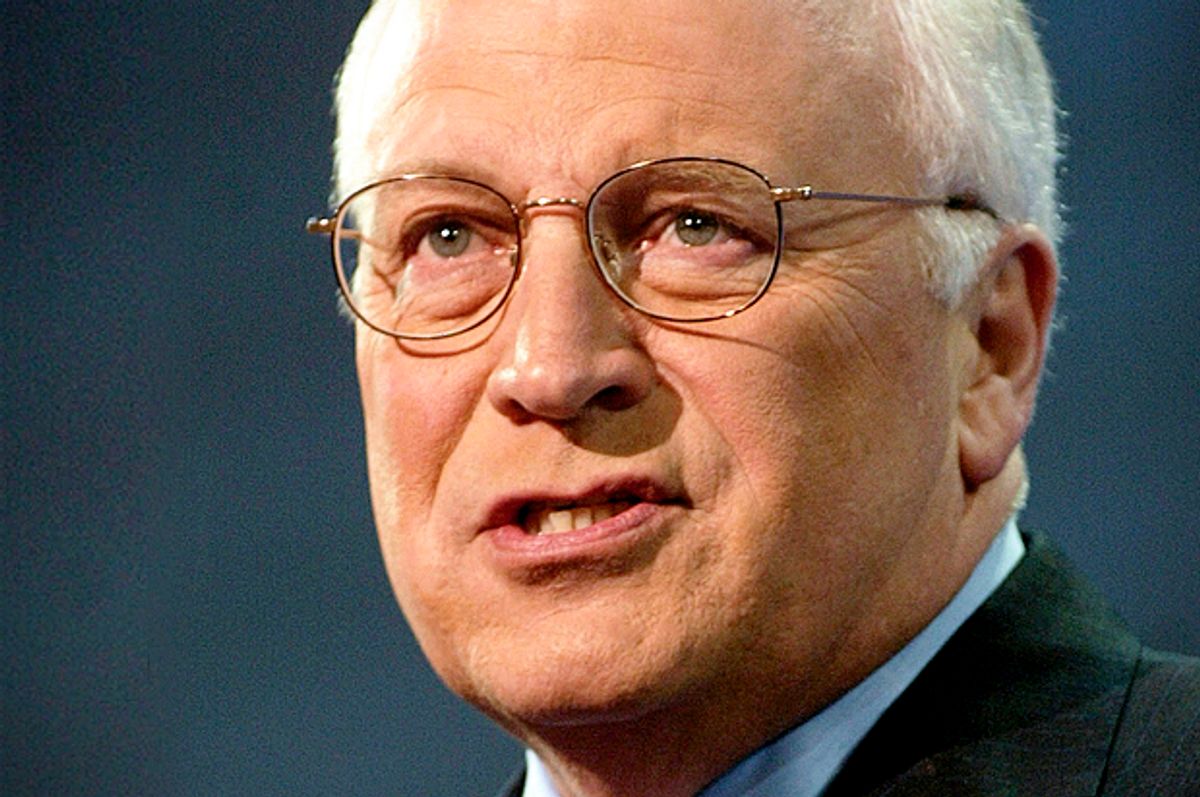 Every so often, former Vice President Dick Cheney seems to jump out of his caliginous hole to make rounds through the media, and defend the indefensible. He seems to believe that if you spew the same lies over and over again, eventually, people will start to believe that it’s true (which is unfortunately accurate for some people). Cheney, who, move over Idris Elba, has the perfect appearance and disposition for the next James Bond villain, is currently promoting his new book, “Exceptional.” And unlike former President Bush, who has become an apolitical painter since leaving office seven years ago, Cheney has doubled down on evil and has been a cheerleader for war with Iran, which, ironically, probably helped President Obama receive the necessary votes (few Democrats have the gall to agree with Cheney on war).

During his book promotion this week, he adamantly defended the war in Iraq, claiming that it was not only warranted, but a complete victory until Obama messed it all up. On Wednesday, Juan Williams of Fox News asked him, “Well, if people say, 'Dick Cheney was wrong about Iraq, why should they listen to you on Iran?'”

Like a perfect sociopath, without an iota of self-doubt, Cheney replied, “Because I was right about Iraq. Our objective was to take down Saddam Hussein. We did it. The world's a much better place without him.”

Cheney ignores that small bit about weapons of mass destruction, which, as in modern Iran, was the real instigator of the invasion of Iraq. He now concludes that the elimination of the evil tyrant Saddam Hussein and the freeing of the Iraqi people was the real goal. Of course, he didn’t much care about stopping the tyrannical Hussein in 1994, when he said that invading Iraq would obviously result in a quagmire:

Once you got to Iraq and took it over, took down Saddam Hussein's government, then what are you going to put in its place? That's a very volatile part of the world, and if you take down the central government of Iraq, you could very easily end up seeing pieces of Iraq fly off: part of it, the Syrians would like to have to the west, part of it — eastern Iraq — the Iranians would like to claim, they fought over it for eight years. In the north you've got the Kurds, and if the Kurds spin loose and join with the Kurds in Turkey, then you threaten the territorial integrity of Turkey.

Volatile indeed. Today, we can see that Cheney’s 1994 assumption was accurate, but when asked on Wednesday whether the Middle East, more unstable than ever, is safer without Saddam in power, he replied that it was. It’s as if he is trying to convince himself what he knows in his new transplanted heart to be untrue.

So what really made Cheney change his mind about invading Iraq? Surely it was not 9/11, which Hussein had nothing to do with, or because he suddenly realized how evil the dictator was (America has nothing against dictators, as long as they're good for business). It is also quite clear today that Cheney and the Bush administration largely manufactured the WMD intelligence. A former CIA intelligence briefer under the Bush administration, Michael Morell, has basically admitted that the administration “gave a false presentation of what [he] said to them” to encourage invasion. It has even been revealed that two “highly-placed human sources at the very top of Saddam’s regime” said that the dictator did not have active WMDs, and both were conveniently ignored by the warmongering administration.

Maybe, just maybe, it was that $34 million exit package that Cheney got when he left his CEO position at Halliburton to become an honorable public servant. Halliburton received around $40 billion in government contracts in the decade after 2003, many of those without bidding. Three years after the Iraqi invasion, its stock had risen by about 300 percent.

There was an estimated 31-60 billion dollars worth of contractor fraud and waste in Iraq war, and a large part of that came from Halliburton, now known as KBR. As Adam Weinstein reported for Mother Jones, KBR cost “at least $193 million in pay for unnecessary personnel, and maybe as much as $300 million,” which includes $100 million of government-furnished property that cannot be accounted for. KBR has also been blamed for the electrocution and death of 12 soldiers, because of poor wiring jobs at army bases.

In a country where leaders were held accountable, Cheney would currently be in a prison cell. Luckily for the former vice-president, we live in a country where the corrupt revolving door is everywhere and political bribery is the name of the game. Iraq was really a perfect capitalist war, and Cheney was doing what any good capitalist would. This is what many call crony-capitalism — when private industry infiltrates the government (or donates millions to political campaigns) and then uses it to their advantage — but really, it’s just plain old capitalism, and private industry has always been in cahoots with the state to some degree (today more than ever). The Bush administration invaded Iraq with the intent of privatization and ended up making millions for private industry. It’s just like when Wall Street executives from Goldman Sachs or Citibank become financial regulators, bail out big banks and then return to their banks after concluding their honorable duty. If gaining control of the government helps the profit motive, you can be sure private industry will attempt to do it.

Cheney, of course, will continue to defend every single move that the Bush administration made, just as he defended the torture of innocents last year, when he said on Meet the Press: “I have no problem as long as we achieve our objective. And our objective is to get the guys who did 9/11 and it is to avoid another attack against the United States.”

One must be rather sadistic and sick in the head to take such a view on torturing innocents, a view that would have absolutely horrified America’s founding fathers, such as Benjamin Franklin, who famously said “it is better 100 guilty Persons should escape than that one innocent Person should suffer.” At this point, it is clear that Cheney will never face any kind of prosecution, and will continue to make his media rounds, defending the indefensible; but let us hope that Cheney’s new heart soon rejects his malevolent self, for the sake of all those who died needlessly.