Black Lives Matter needs womanism now: A case for opting out of — or adding to — a [white] feminism that often fails us 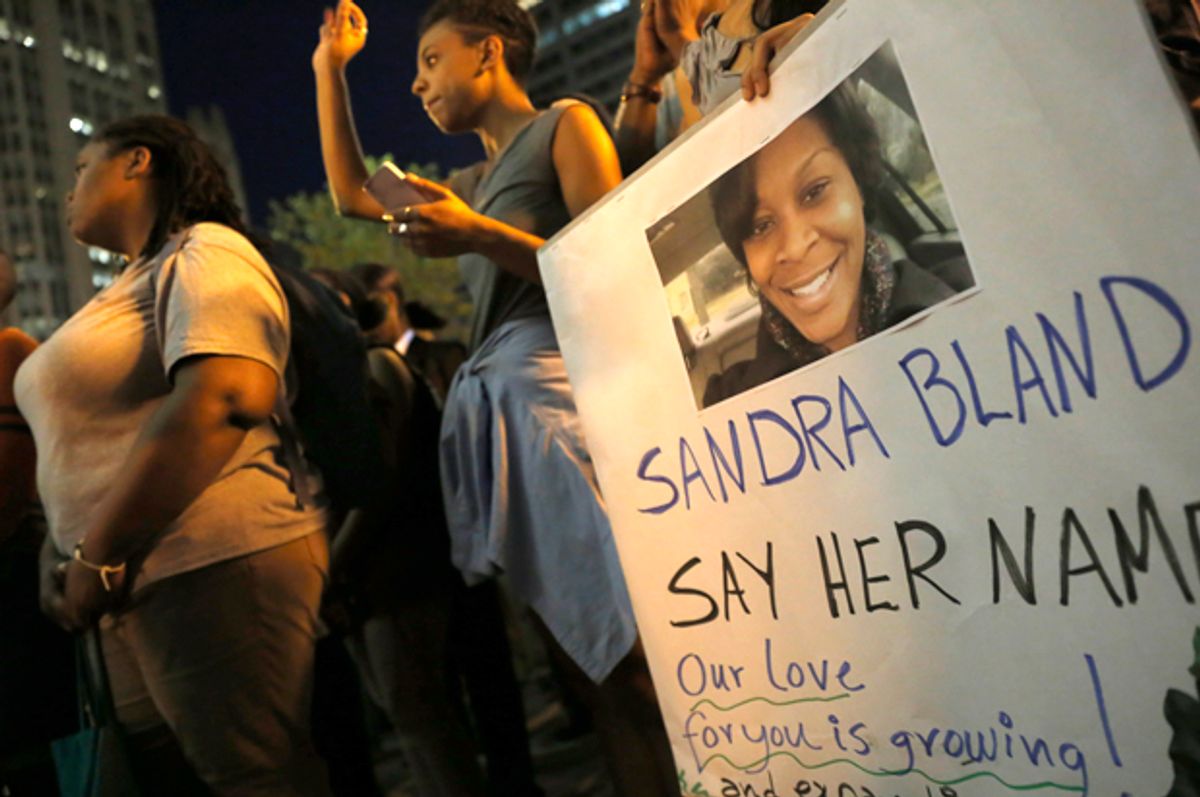 I've never liked the word "revolution." It brings to mind the act of going around in a circle. Or, as a friend of mine used to say, it's exactly the thing to do if one wants to end up right back where you started. For that reason, I hope what's happening in America right now is not, exactly, revolutionary.   The weight that a single word can carry is thrilling, and sometimes terrifying. Literature lovers—even non-believers—can’t help but get a tingle of delight at the start of the Book of John: “In the beginning was the Word...” Forget Adam and Eve, the Heavens and the Earth—for some of us, language is the genesis and the revelation, and the words we use are, for that reason, never arbitrary. This is especially true for the words we use to describe a movement, or words used to self-identify. “Feminist” is one of those words that carries a lot of weight, but it's almost laughable how so many people—especially women—are repelled by it. In a recent interview with Vulture, the great Emma Thompson broke it down like this:

“Most women who I would want to listen to wouldn’t have any problem at all with the word feminist... It’s bizarre. Any woman who says they’re not a feminist is basically saying that they don’t believe in equal rights for women.”

It's clear that her intention was to address those mind-boggling women who refuse to support feminism because they've been convinced that feminism is about man-hating, or forcing abortions on women everywhere, or anything other than simply advocating for equal rights for women. But in her critique, Emma Thompson may have left out a different group of women who don't identify as feminists because they see so little of themselves in public feminist discourse.   These are the women who cannot ignore the fact that the founder of Planned Parenthood was a proud racist who subscribed to eugenics. They are the women who furrowed their brow at Patricia Arquette's Oscar speech; the women who can't get past a certain aspect of Amy Schumer’s comedy (some have called it ignorance, others believe it's just plain old racism, or lazy, race-based humor). For the record, I adore Schumer, but it's important to consider the fact that a brilliant sketch like “Last Fuckable Day” simply wouldn’t work with a group of black actresses, who already aren’t seen as “fuckable” in the same way as their white counterparts. They’re the women who, whether they watched the recent MTV VMAs or not, paid close attention to the headlines reporting on Nicki Minaj and Miley Cyrus, and right now they can’t even begin to watch Taylor Swift’s all-white music video set in Africa. Black women concerned with black lives have always had a complicated relationship with feminism, which often is assumed to come with "[white]" in front of it.

The good news is that [white] feminism has never been free of critique, and the same is true today. More and more women—including young celebrities like Amandla Stenberg and Rowan Blanchard —are calling for an intersectional feminism. And that’s great. Feminism, like all concepts and movements, would do well to consider the variety of people affected by the issues it seeks to address. But—and I say this with no intention of aligning myself with the ignorant people behind those “I Don’t Need Feminism” signs—there’s a reason the women participating in the Black Lives Matter movement do not need [white] feminism, and the reason is womanism.

What ever happened to womanism? Many of us know the term, and are fond of quoting Alice Walker’s lovely descriptor: “womanist is to feminist what purple is to lavender.” So why are we fighting for and demanding an intersectional feminism when one already exists? Is it possible that the energy we spend explaining (again, and again) that you cannot talk about gender without talking about race, class and sexual identity might be better spent pushing for more usage of the word "womanism" (which is sometimes aligned with black feminism, though there are important distinctions between the two), and embracing and re-imagining its ideas?

The differences between womanism and feminism are obviously much more complicated than the simplified image of purple vs. lavender. Womanism appeals to many black women because it places not just women but community at the center of its focus. Feminism attempts to do this too, but the black community remains burdened with a very unique set of issues in America, hence the need for a specific kind of feminist communal thinking. For many of us who want to fight for reproductive rights, wage equality and for more diversity in Hollywood (all incredibly important and relevant issues, which are not divorced from race), we can’t help but find the issue of the actual right to be black in America somewhat more pressing.

Black women fighting for gender equality and black lives don’t necessarily need to continue to look to feminism to embrace our concerns. In other words, in the same way that the Black Lives Matter movement doesn't need white empathy or black respectability to function—two things we are often told we do need, to some degree—black women working against multiple forms of oppression do not need [white] feminism, when we already have access to womanism and/or black feminism.

A marriage or dialogue between Black Lives Matter and womanism is now critical because, like past movements for black rights in America, BLM has struggled with sexism and the erasure of women. But if womanism became a greater part of the discussion or—better yet—became one of the lenses through which we viewed issues like police brutality, we wouldn’t need hashtags like #SayHerName. The movement would not suffer from that very traditional and very problematic misogyny, where the names of slain black men, though not spoken enough, are still more publicized than the names of slain black women.

Indeed, there are women who are working tirelessly to fill these holes, but the work is exhausting partly because what many are essentially arguing in favor of—womanism—is not a part of the mainstream lexicon. This can and should change. Right now, there is a feminist movement, and there is Black Lives Matter. Black women have been at the forefront of both (three are, in fact, the creators of BLM), and yet somehow often marginalized in both. Womanism is so appealing because it’s the one set of ideals where such marginalization of women of color would be quite literally impossible.

It’s important to note, as Patricia Hill Collins and other theorists already have, that womanism is not a perfect concept, nor is black feminism. I would argue that, in keeping with the garden metaphors of Alice Walker, the seed of womanism has long been planted, but hasn’t been given the proper attention to really bloom. Our foremothers (such as Collins, Walker, Pearl Cleage, Audre Lorde, Hortense Spillers, Toni Morrison and basically everyone featured in my undergrad Bible “Reading Black, Reading Feminist”) did some of the work for us, with thinkers like Gwendolyn D. Pough, Joan Morgan and Tricia Rose coming along and laying a more contemporary foundation. Today we have the likes of Brittney Cooper, Roxane Gay, Feminista Jones and Johnetta Elzie and Jamie Broadnax of Black Girl Nerds operating from a womanist standpoint much of the time, although the actual word remains unspoken far too often. Cooper herself has declared the concept not “political enough,” but who’s to say that the idea cannot evolve to fit these times? And more swiftly than feminism can become fully intersectional, perhaps.

Today’s fight will require a reworking and rethinking of concepts that have already been introduced. Today’s fight will, especially, require us to take those concepts out of the archives, and to make them real and tangible and available to black women who don't have direct access to those college syllabi. How can a 2015 (and beyond) womanist perspective allow us to better fight for the demands of Campaign Zero? How can womanism enhance every protest and every think piece? How can it work to dismantle the dangers of respectability politics?

The truth is, we don’t know yet. But if we work to normalize womanism, and allow it to transition out of its beloved and admittedly somewhat mystical state, we might begin to see how effective it can be as a tool in this ongoing fight to de-criminalize and de-weaponize the various genders, classes and sexual identities represented in American blackness.

While the cyclical nature of a “revolution” might be problematic for me, a call for womanism is, in many ways, a call for a circle, or many circles, of women—something Alice Walker saw as a personal, political and social necessity. What’s great about that image, which Walker describes as a gathering of “smart, wise, can-do women” (Ronda Roussey might call them by another name), is that—like womanism—it implies simultaneous variety, difference and solidarity. It invokes a world where feminists, Black Lives Matter activists and womanists (and people who identify as all three—because that’s also completely possible) can gather together and acknowledge that though their issues are unique, the common enemy is, always, the tyranny of legalized inequality.