Kentucky is "a house divided": Jefferson Davis, Kim Davis and the battle for the soul of the Bluegrass State

The dustup in Rowan County is nothing new. Kentucky has long served as a bellwether for American political tensions 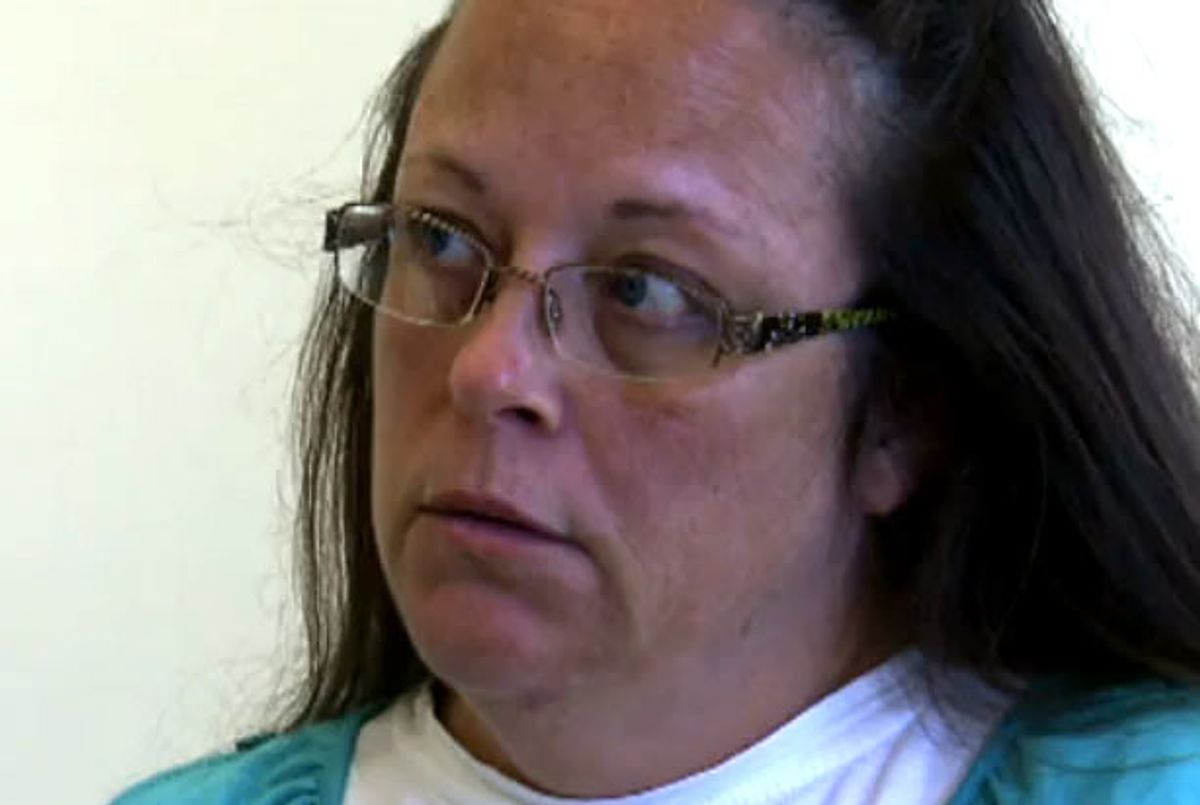 It has been a long, hot summer down home. From the debate over same-sex marriage to the continued fight against Obamacare, my home state of Kentucky has been broiling with tensions over the social and political issues rippling across the entire country. It's nothing new for the Bluegrass State.

Kentucky is a land of contradictions. Both North and South, hospitable and hostile, extravagantly rich and desperately poor, the commonwealth (as any true Kentuckian will remind you, we’re not a state) almost prides itself on this dichotomy. Driving down the Bluegrass Parkway, it is common to see trucks with license plates showing support for both the University of Kentucky and the University of Louisville, proclaiming proudly “A House Divided.”

More from The Daily Dot: "Exploitation.tv is bringing cult horror and smut to 2015"

That we are. Despite our state motto (“united we stand, divided we fall”), Kentuckians have a storied history of squaring off against one another, a tradition we carry on to this very day. From Confederate president Jefferson Davis to Kim Davis—the Rowan County clerk who was recently jailed for denying same-sex couples marriage licenses—we’ve become a microcosm of this summer’s national discourse.

You meet a lot of women like Kim Davis down home. In Eastern Kentucky, the born-again Christian—with her denim skirts and disdain for the federal government—is as ubiquitous as the hills themselves. They go to church on Sundays to pray their sons won’t do meth on Mondays. They vote Republican, then go spend their food stamps at the Save-a-Lot. They oppose LGBT rights while embracing their own queer kin (because “you do for family”).

Despite having her appeal to the Supreme Court rejected, Davis still refuses to issue marriage licenses. Yesterday, U.S. District Judge David Bunning found her in contempt of court and remanded her into custody of federal marshals.

Davis herself is a series of contradictions. A red state Democrat opposed to gay marriage, she has received most of her political support from Republicans. Among those backing her are GOP presidential candidate Mike Huckabee, who personally called Davis to praise her “courage and humility.”

But her personal life has been dredged up over the past several months. Everything from accusations of adultery to her three previous marriages have been touted as evidence of her hypocrisy and inconsistencies. Four-and-a-half years ago, after her fourth marriage, she began attending an Apostolic church, an extremely conservative denomination which enforces strict gender norms.

Divorce is prohibited but a “forgivable sin” in Apostolic theology, Jack Jenkins explained at Think Progress, “whereas a same-sex marriage leaves two individuals in a constant state of unrepentant sin.” It’s a gross double-standard that allows straight people to marry and divorce with impunity but has led Kim Davis to deny that same legal right same-sex couples.

Davis and her ilk keep appealing to the First Amendment and their “deeply held religious beliefs,” insisting they are on the side of righteousness. But their actions breed a culture of fear, ignorance, and marginalization—which, in ways both tangible and visceral, injure fellow Kentuckians.

Dalton Maldonado discovered this last winter, after coming out to his teammates on the Betsy Layne High School basketball team. His teammates took it well, rallying around him after his opponents allegedly used anti-gay slurs on the court. Later, Maldonado and his teammates report the opposing team chased the Betsy Layne players’ bus down the winding roads of the Appalachian foothills.

From the halls of a high school to the halls of power, this split personality plays out across the commonwealth. Nowhere is it more prominently displayed than in the state capital. Across from a statue of Abraham Lincoln—our favorite son and the man who coined the term “a house divided,” stands a statue of Jefferson Davis, the president of the Confederacy. Both men were born in the Commonwealth, and while Kentucky never technically seceded, it had a star in both flags.

Since the removal of the Confederate battle flag at South Carolina’s state capital in July and a statue of Davis at the University of Texas at Austin last month, our own Davis statue has become a lightning rod in the debate over Confederate iconography. Instead of removing it, the state’s Historic Properties Advisory Commission has opted instead to add a plaque to put the monument in “historic context.”

The decision was opposed by 72 of the state’s history professors, who signed a biting letter to House Speaker Greg Stumbo. “Kentucky’s landscape is riddled with images that belie the actual facts of history,” they wrote, pointing to the more than 70 monuments to the Confederacy (and only two to the union) in a state that never seceded and fought overwhelmingly for the NorthIt’s not just our landscape that’s infused with paradox. Kentuckians cling desperately to the past as they try to make sense of the future. This is especially true in the eastern coal fields, where the industry which powers its economic engine—and gives the region its name—is disappearing. Republicans, such as Senate Majority Leader Mitch McConnell, himself from the commonwealth, blame President Obama’s fabled “war on coal.”

As Simon Maloy pointed out at Salon, though, the coal industry has been disappearing for decades. According to Vox’s David Roberts, it faces competition from “cheap natural gas, coal seam depletion, competition from cheaper and cleaner Western coal.” President Obama has offered a solution: the Power+ Plan, which would pump hundreds of millions in stimulus dollars into the region.

Local governments are getting on board, but the state’s congressional delegation, led by McConnell and Republican Congressman Hal Rogers—who represents much of the region—are opposing it at every turn. In doing so, they’ve left local governments to advocate for federal dollars while their own representatives inWashington fight against them.This isn’t unusual in Kentucky. Both McConnell and Rogers have opposed the Affordable Care Act from its inception. In a state sceptical of the federal government, it makes sense. A poll conducted last year found 57 percent of Kentuckians had an unfavorable view of Obamcare, while a majority supported the state’s own healthcare exchange, Kynect, according to a New York Times survey. When it’s Obama, it’s bad; when it’s Kentucky, it’s good.

More from The Daily Dot: "These German teens built an eye-controlled wheelchair from scratch"

And good it has been. While Healthcare.Gov was plagued with technical issues, Kynect worked seamlessly, becoming a model for the nation. The website allowed hundreds of thousands of Kentuckians to obtain coverage, cutting the number of uninsured in half. The Times estimated that nearly 10 percent  using the online exchange, including thousands who hadn’t seen a doctor in years. This all makes Republican gubernatorial candidate James Comer’s plan to dismantle Kynect a real threat—and a real shame—to the people so desperately depending on it.Kentuckians support insuring the masses, but not the law that’s enabled the state to do so. Local governments and Appalachian Kentuckians are seeing the need for increased federal aid, even as their national representatives betray them. A statue of a traitor stands opposite a statue of America’s greatest president. A gay high schooler gets the support of his teammates and school, but not the most simple recognition. And in Rowan County, a public servant refuses to serve the public because of her private beliefs.

These debates aren’t exclusive to Kentucky. Conflicts over “religious liberty” and LGBT rights are raging throughout the country, with more county officials around the country beginning to emulate Kim Davis as legislatures carve out exemptions for homophobic public servants to refuse to serve gay folks. Kentucky is a state still trying to figure out its place in a rapidly changing world. It has to reconcile its past with its future, its religion with its civil rights, if it ever hopes to prosper in the 21st century.

Skylar Baker-Jordan is a freelance writer based in Chicago. He runs the blog The Curious American, where he writes about masculinity, the LGBT community, and intersectionality. Follow him on Twitter.
MORE FROM Skylar Baker-Jordan