Britain's "Bernie Sanders" moment: How this unassuming left-wing populist became the leader of the Labour Party

Meet Jeremy Corbyn, a man who just defied the odds and became the most important figure in British politics 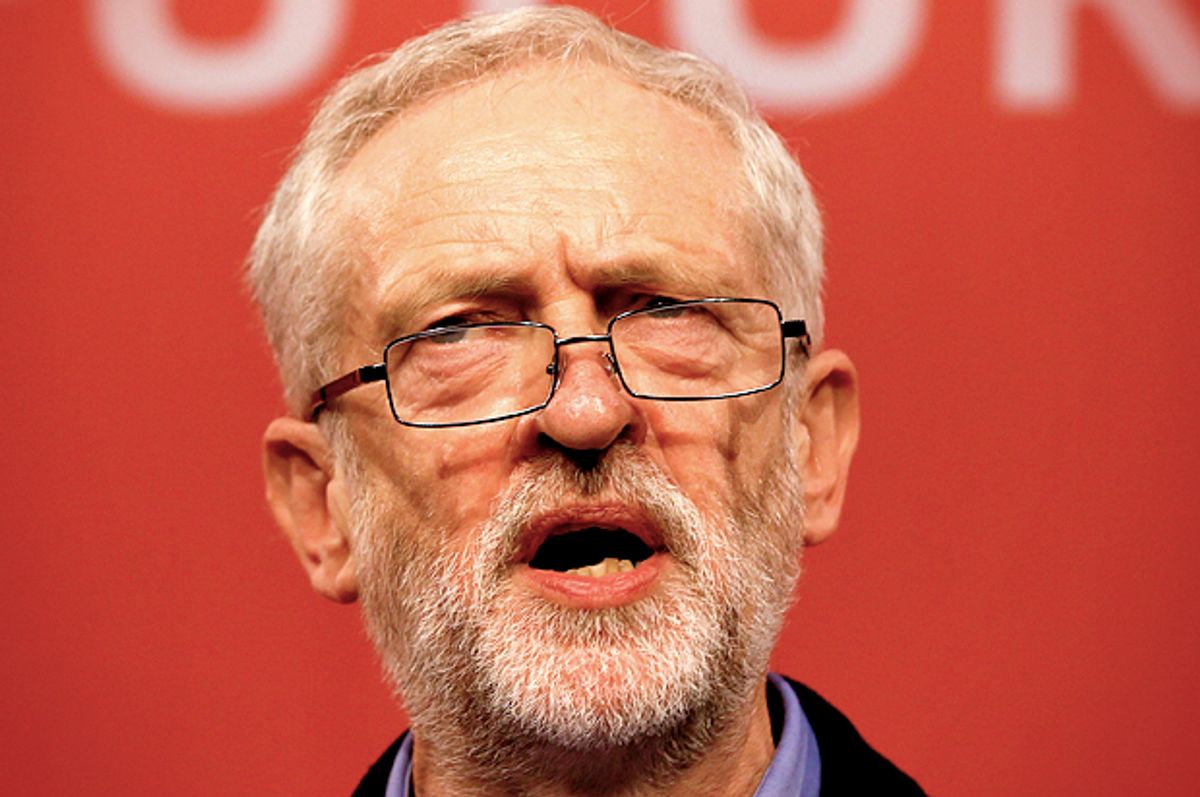 Something astonishing has just occurred in British politics. On Saturday, the Labour Party elected Jeremy Corbyn, a 66-year-old, unabashed socialist, as its new leader. Corbyn won a staggering 59.5 percent of the vote in a four-way contest. He is the most left-wing leader in Labour's history, a serial dissenter within the party, a man who nobody ever thought would win the leadership election.

Still, as Serena Williams can tell you, shocking things sometimes happen. So how did we get here?

Corbyn's victory comes after Labour was decimated by the Conservatives in last May's parliamentary elections. Immediately after the election, a stream of grandees on the right of the party took to the airwaves. Their universal message was that, under former leader Ed Miliband, Labour had talked too much about the poor and had been too hostile to business. The party, they said, needed to focus on "aspiration" and "wealth creators," accept that Conservative narratives on austerity, welfare and immigration had won, and move to the right in order to regain power. As the leadership contest to replace Miliband got underway, almost all of the candidates echoed these messages.

Corbyn, who has represented a London seat in Parliament since 1983, was an outlier in these discussions. He only made it onto the ballot because a number of MPs who didn't even support him nevertheless nominated him, saying that his views had a constituency within the party and should be represented. The assumption was that Corbyn would toss off a few left-wing slogans, be patronized by the other candidates and shuffle quietly to the exits.

A funny thing happened, though. It turned out that many Labour party members didn't really like being told that a whole chunk of their most deeply held beliefs needed to be tossed aside in order to challenge the Tories. Corbyn tapped into the anti-establishment wave that has swept across the industrialized world. In him, voters found someone who rejected the party's sharp rightward turn under Tony Blair and who had opposed both the Iraq War and the economic consensus that's gripped the globe for almost 40 years. Corbyn proposed reversing the austerity cuts imposed by the Tories, ending Britain's nuclear weapons program, possibly changing its relationship with NATO and renationalizing the country's railway system. A key moment in the contest came when Labour's acting leader, Harriet Harman, decided that her party would not oppose a series of new welfare cuts being introduced by the Tories. Corbyn was the only one of the leadership contenders to buck the party line.

The party elite was openly horrified by these positions, and by the growing support they began attracting. Tony Blair wrote that a Corbyn victory would lead to Labour's "annihilation." Chuka Umunna, a prominent young MP on the right of the party, complained that the rank-and-file were behaving like a "petulant child" in supporting Corbyn.

The warnings backfired, though, as party members revolted against the elite. The Guardian's Gary Younge summed up the feeling behind this revolt very well:

For the past couple of decades the Labour leadership has looked upon the various nascent social movements that have emerged – against war, austerity, tuition fees, racism and inequality – with at best indifference and at times contempt. They saw its participants, many of whom were or had been committed Labour voters, not as potential allies but constant irritants.

Blair, who has spent his post-political life cozying up to dictators and making pots of money, was a particularly bad messenger.

Corbyn also reached out to disillusioned young voters and took advantage of a newly installed electoral system which dramatically widened the franchise by allowing non-members to vote if they paid £3. (The wave was so big for him, though, that party members overwhelmingly backed him as well.) In the end, over 420,000 people voted—the largest amount ever in any British party election.

It didn't help the anti-Corbyn forces that his three counterparts in the election—Andy Burnham, Yvette Cooper and Liz Kendall—were widely judged to have waged bland, empty campaigns composed mostly of focus-grouped slogans. In contrast, Corbyn's campaign was seen as plainspoken, positive and unspun. "The argument that Jeremy Corbyn is unelectable is being made by three candidates who can’t even win an election against Jeremy Corbyn," the New Statesman's Laurie Penny pointed out.

In the end, it wasn't close. Corbyn was over 40 points ahead of his nearest rival. Kendall, the candidate backed most fervently by the Blairite wing of the party, won just 4.5 percent of the vote.

The big question now is, what's Corbyn going to do? His entire career up to this point has been as an activist MP on Labour's edges; never before has he had to contend with the powerful, entrenched forces at the heart of British politics in such a direct way. There is one challenge after another. He leads a sharply divided parliamentary party, with big disagreements about key issues like the EU, public spending and immigration. Many of his high-profile colleagues refused to serve with him in the opposition cabinet, though he was ultimately able to put together a team from several different sectors of the party. He has vowed to tap into the mandate he's been given by Labour's rank and file as a way of solidifying his authority, but it remains to be seen how that will play out. Labour could face its biggest internal drama since the 1980s, when its left and right wings warred with each other relentlessly.

Then there are the external threats. The media—much of it conservative and extremely partisan—will be unrelentingly hostile; the front pages the morning after Corbyn's victory were evidence enough of that. The Conservatives immediately declared that Corbyn's election had made Labour "a threat to our national security," an eye-popping attack that would have made Karl Rove proud. It will be the first of many such salvos. Corbyn's hope will be that the forces that propelled him to victory can overcome all of this.

Even if Corbyn hadn't won, Labour faced a huge challenge in regaining power by the time of the next election in 2020. It lost votes in every direction in 2015. It was wiped out in Scotland, where voters ejected 40 Labour MPs in favor of the pro-independence, anti-austerity Scottish National Party. Other former supporters deserted it for the left-wing Greens, the right-wing, anti-immigration UKIP, and the Conservatives. It's not clear if any of the leadership contenders could have come up with a magical solution to these problems in just five years. This reality only helped Corbyn; many voters likely made the calculation that if the establishment candidates had no chance of winning, they might as well vote for someone inspiring who could attempt to break with an old, tired way of doing things.

Personally, I like the idea of Corbyn a bit more than the man himself. He's a somewhat colorless figure and a pedestrian speaker. (I still carry a torch for Corbyn's most prominent predecessor on Labour's left, the late Tony Benn.) His victory continues Labour's depressing, century-old tradition of only electing male leaders, something compounded by his all-white, all-male appointments to the top jobs in his shadow cabinet. But there's no doubt that his ascension represents the biggest threat to establishment politics in Britain for at least a generation—anything that makes Tony Blair so furious has to have something marvelous at its core—and whatever happens now, it will be fascinating to watch that establishment contend with the forces he's unleashed.