Leave Jon Snow's corpse alone: The hunt for clues to #JonSnowLives is sucking the joy out of being a fan

Kit Harington's beard is back! He's been spotted in Belfast! When did we all become pop culture detectives? 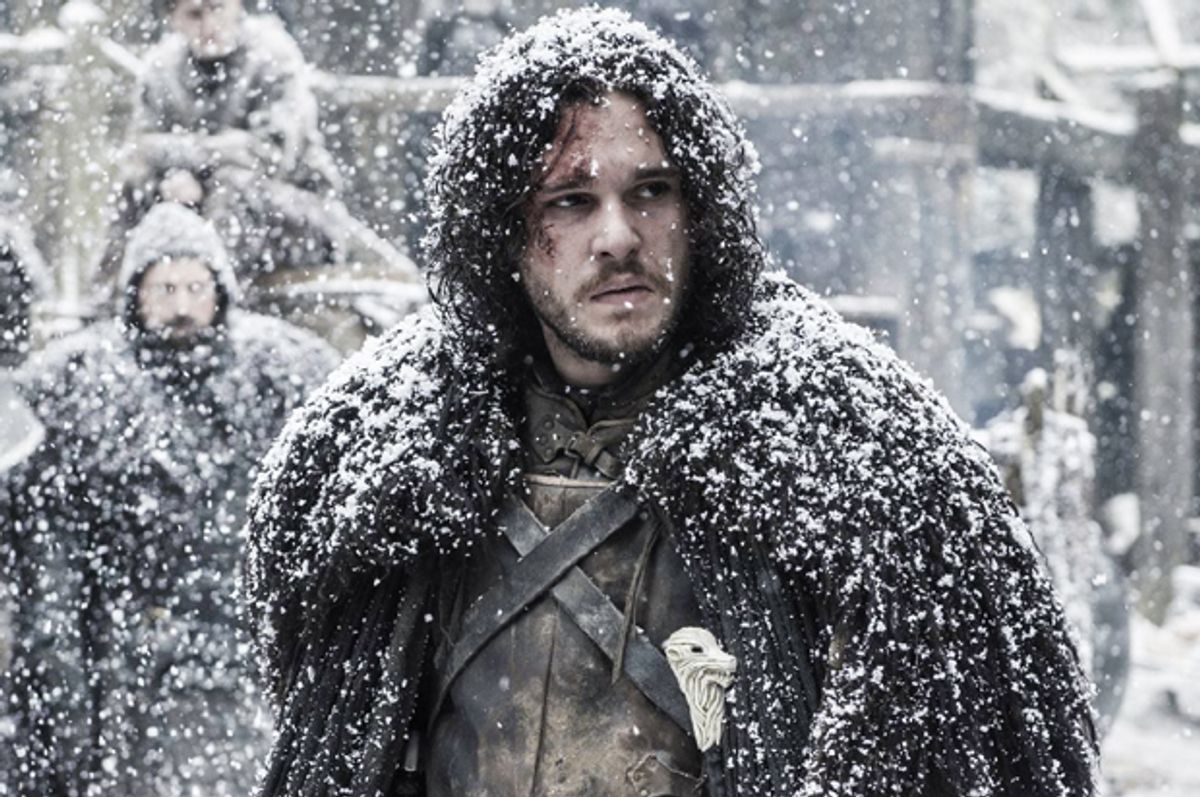 Well, he certainly looks dead. Near the close of the fifth season of “Game of Thrones,” the shaggy haired, honor-bound Jon Snow -— lured out by the promise of finding his uncle Benjen – is repeated run through with swords. “For the Watch,” his assailants intone, and he’s soon flat on his back in the, uh, snow, blood pooling around him, eyes gone blank.

It’s hard to think of a clearer definition of “dead” than this. The actor who plays Snow, Kit Harington, told Entertainment Weekly that his character is dead and “not coming back next season.” The show’s co-creator David Benioff has talked publicly about “the death of Jon Snow.” That should probably be enough.

But at least since July, there have been rumors that Snow’s character is secretly alive, or coming back, or something. When Harington walked through the airport in Belfast – near where the show shoots – Vanity Fair declared, “The return of Jon Snow is turning into the worst-kept secret in TV history.”

And now this inverted combination of “Who Shot JR” and “Paul is dead” has moved to the next stage, as various loose ends, semi-informed speculation, and strands of rumor begin to be woven together into full-blown theories. Harington renegotiates his contract with the show. He shows up at Wimbledon with his GoT hair and beard. He tells a Belgian magazine that he’ll be involved with the show for a while now.

This is from a Mashable post that works hard to be responsible:

So basically, to sum up: There's now a fairly hefty weight of evidence to support the hope that Jon Snow will be making a return in Season 6, and quite possibly in Season 7, too. But if he does show up, we have no idea in what capacity he'll appear. It could be in a flashback, as a vision, or even as a corpse.

And in terms of contracts and interviews, let's not forget that this is Game of Thrones we're talking about. If the people involved in the show are even half as good at messing with viewers as George R.R. Martin is at keeping his readers guessing, then we really can't afford to take anything for granted.

This kind of speculation and theory-building is likely to increase in coming months: The show does not return until Spring. And what comes next is likely to veer between the obsessive and the irresponsible.

Why, first of all, is this happening? Obviously, a huge number of people really love “Game of Thrones” and many tend to be the kind of dedicated fans who would otherwise be trying to decode the runes in “The Lord of the Rings” or build flowcharts around the plot of Christopher Nolan’s “Memento.” Digital technology – not just the international communication made possible by social media, but the proliferation of camera phones that allow a large number of people to collect and compare evidence. Attention spans continue to shrink, so for a lot of people, the idea of waiting until next year to sort this one out is inconceivable.

But should the fate of a beloved show – like the afterlife of characters like those in the "Harry Potter" novels – be examined with the forensic rigor of a CSI episode?

I’m gonna be a bit analog here and say, ladies and gentlemen, please put down your cellphones and step away from your Twitter accounts. We had to wait to find out how “M*A*S*H” and “The Mary Tyler Moore Show” and “Breaking Bad” and “Mad Men” ended – we gave the show’s writers and creators the space to work through their characters at the pace they thought was right. That surely sounds deferential, but didn’t we watch these shows because we trusted them and were curious about what they had to say and enjoyed the pace at which they said it?

But more than that, art is about mystery, and the behavior of human beings is sometimes explicable and sometimes baffling, and the downtime between seasons helps to express all this. This was part of what motivated the weirdly brilliant fadeout in the last episode of “The Sopranos.” I’m not urging the “GoT” writers to leave us hanging forever, but can we let Snow go for now? Maybe he'll return, maybe he won't. But can we walk into Season 6 (with Richard E. Grant, by the way) and see where the storytelling takes us?