Ahmed Mohamed's unconscionable arrest: The toxic cocktail of racism, paranoia and tech-illiteracy that criminalizes a Muslim teen with a clock 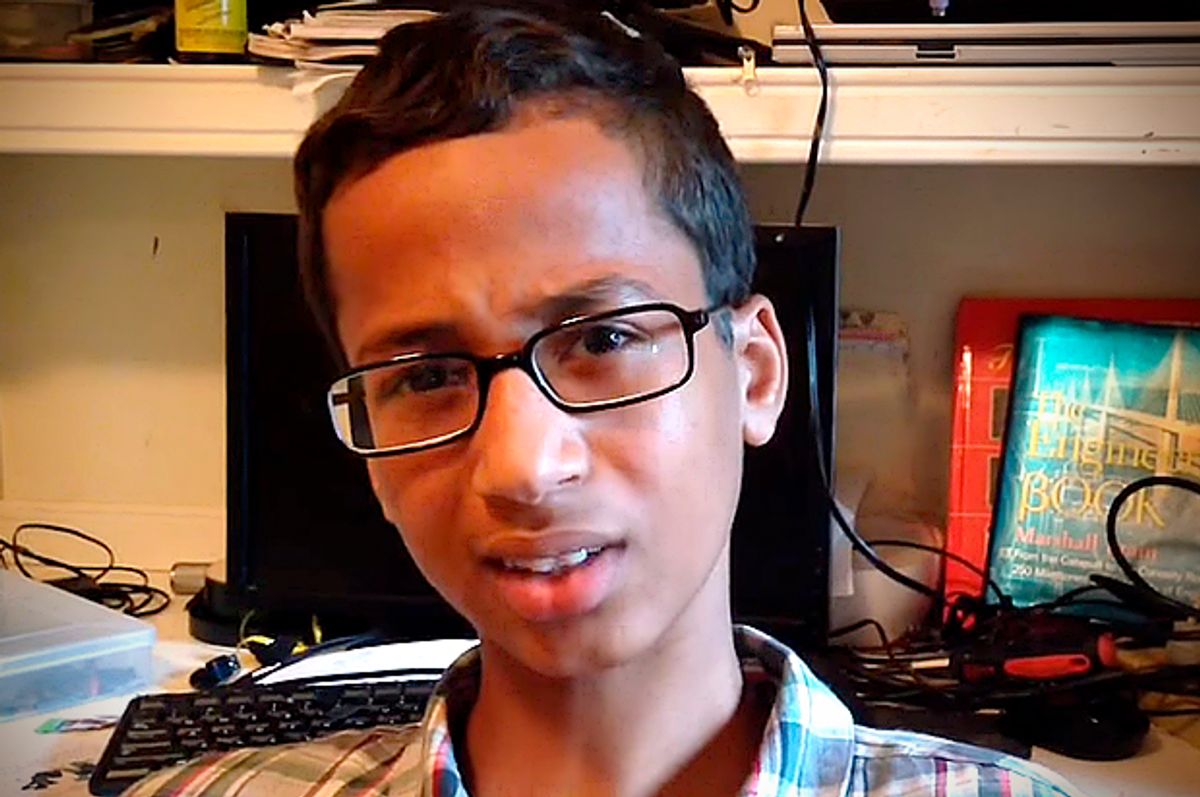 Recently, I watched the 2015 film “Spare Parts,” based on the improbable true story of a rag-tag group of teenagers who beat M.I.T. in a national robotics competition. The entire Carl Hayden High School team made up of undocumented kids from Mexico, and the boys had to deal with structural barriers posed by poverty and the stress of precarious living situations, on top of everyday racism and bullying. The film itself was low budget and cheesy, but the 9th graders I watched it with—including one girl who participated in the viewing party via Skype--were riveted and, by the end, cheering.

The fairy-tale message of the film was this: Anything is possible with a little ingenuity, determination, and elbow grease. But although the film itself has a happy ending, and the high school team did in fact win the college competition in real life, the story of what happened to these boys afterward is depressing, because it deflates every feel-good narrative claiming that merit overcomes social barriers.

The outlook of mechanically-minded students of color could not have been helped by the fact that yesterday, police in Texas arrested a ninth-grader for making a clock and bringing it to school. The kid had loved robotics club in middle school and was hoping to join something similar in high school, so he brought his creation to show to his engineering teacher. But he had to carry it around for the rest of the day. When it beeped in English class, that teacher confiscated it. Then she called the cops.

On one level, this story fits inside an appalling pattern of police arresting children as young as five for offenses such as throwing paper planes in class, playing tag, and having overdue library fines. But if, on a broader plane, childhood itself is now a walking potential crime, research studies have thoroughly documented the fact that the preschool-to-prison pipeline disproportionately targets children of color.

The story of the clock-making kid gets worse, for his name is not Johnny Smith, but Ahmed Mohamed, and he is Muslim. Authorities at Irving MacArthur High School thought his device was a bomb. The subtext is clear: if the boy is a Muslim, he must be a terrorist.

[The police] were like, ‘So you tried to make a bomb?’" Ahmed said.

"I told them no, I was trying to make a clock."

Ahmed was led out of school in handcuffs and given a three-day suspension. The Dallas Morning News reports that “police say they may yet charge him with making a hoax bomb — though they acknowledge he told everyone who would listen that it’s a clock.” The police confirm that a clock is what Mohamed claimed to have built, but according to police spokesman James MacLellan, the boy “was unable to give a ‘broader explanation’ as to what it would be used for.”

Rank stupidity aside, the xenophobic reaction to Mohamed’s home-made device is the high school version of what happened to the chair of Temple University’s Physics Department this past spring. A naturalized American citizen, Dr. Xi had been arrested by the U.S. Justice Department on charges of sharing sensitive technology with China. This past Friday, the Justice Department dropped all charges, because it had basically arrested him for sharing the kind of information that shows up in Popular Mechanics. In other words, kid stuff.

“It was an embarrassing acknowledgment,” the New York Times commented, “that prosecutors and F.B.I. agents did not understand—and did not do enough to learn—the science at the heart of the case before bringing charges that jeopardized Dr. Xi’s career and left the impression that he was spying for China.”

The real trouble starts when authorities with ample power to throw you in jail happily flaunt their own ignorance. For those who doubt that we are living in a world where brown people with brains are now treated like terrorists, consider the case of multi-media installation artist Hasan Elahi. An American citizen with enough Texas in him that he likes to blast country music from his pickup, Elahi had the misfortune of placing broken television sets in storage in post-9/11 Florida. After he ended up on the FBI’s watch list, he became world famous for “The Orwell Project,” a kind of ironic, collaborative performance artwork between himself and the FBI. He now conducts surveillance on himself, saving the FBI from having to do it. All they have to do is check his website from time to time (and they do.) Effacing all privacy, his entire life is posted on trackingtransience.net.

Elahi isn’t a terrorist. He’s an artist. And Ahmed Mohamed isn’t a terrorist either. He’s a 14-year-old boy who likes to tinker, who was taken out of school in handcuffs and also received a three-day suspension for his "crime." This creativity should be encouraged and celebrated in all its forms, not converted into an excuse to call the cops.

Two years ago, 16-year-old Kiera Wilmot was arrested, charged with two felonies, and expelled from Bartow High School in Polk County, Florida, for conducting an experiment with combustible household chemicals that ended up creating a puff of smoke on school property. Today, she is heading to NASA space camp, because the curiosity she demonstrated prompted engineers and scientists to support her on every level.

Can M.I.T. please give Mohamed an offer of early acceptance, and NASA invite him to him to attend space camp? That would be a fairy-tale ending for a situation so ridiculous that the Twitter hashtag, #IStandWithAhmed, is nearly 100 percent in support of this kid. Social media has spoken, and it wants a Muslim teenager named Ahmed Mohamed to keep on tinkering, because maybe he'll invent something that will save the world someday. It's a nice thought.