Forget Donald Trump: John Kasich is the man who should really be keeping Jeb Bush up at night

In single digits both nationally and in early states, the erstwhile front-runner risks being eclipsed by Ohio's guv 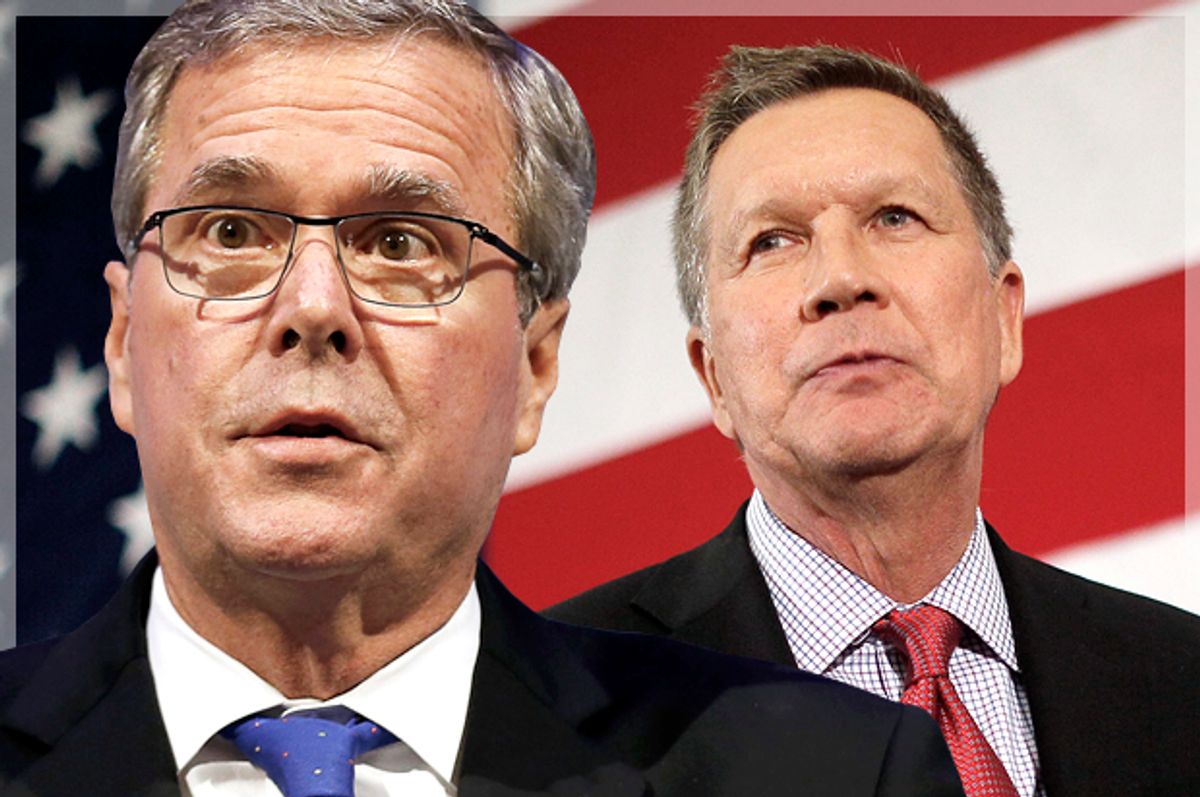 Heading into Wednesday night's Republican debate at the Ronald Reagan Presidential Library, erstwhile front-runner Jeb Bush faces escalating pressure to be uncharacteristically combative toward Donald Trump, whose flair for showmanship and red meat, right-wing rhetoric has catapulted him to the top of the 16-candidate pack. While Trump had already seized the lead in national and early-state polls by the time of last month's showdown in Cleveland, this time is different: With Trump having withstood months of withering criticism for inflammatory remarks that would have sunk any other candidate, the conventional wisdom that The Donald would inevitably self-implode before a single vote is cast looks far less tenable than it did when Trump launched his campaign in June.

But while Trump's dominant position in the polls and his relentless attacks on the "low-energy" Jeb make him an obvious target of Bush's barbs, the former Florida governor may want to spare some of his rhetorical artillery for Ohio Gov. John Kasich, who poses far more of an existential threat to Bush's candidacy.

You wouldn't know it from glancing at the national polls or watching national news, where it's all Trump, all the time. That, as the old tune goes, is entertainment. Though Trump may yet defy the laws of political gravity -- he's already done it, after all -- reasons to doubt his staying power abound. More than four months before the primaries and caucuses begin, polls show that the preponderance of Republican voters are still open to changing their minds about whom they'll support, and with Ben Carson slowly creeping up on Trump in the latest polls, it's only a matter of time before, for the first time in months, Trump isn't topping every single GOP survey. Once he loses the aura of Donald the Indomitable, Trump's brand will take a hefty hit.

Where, then, does this leave Bush -- and where does John Kasich come in?

Though Trump's rise coincided with Bush's decline, it does not follow that a Trump plateau (or collapse) will fuel a Bush resurgence. Bush hasn't slipped into single digits nationally solely because of Trump's political skills; for Jebworld, the inconvenient truth is that their guy has also been a lackluster or even stumbling candidate. His bumbling answers on the war in Iraq, Social Security, women's reproductive health and the "need" for Americans to "work longer hours" show a candidate who hasn't exercised a campaign muscle since 2002; it's little wonder that despite vacuuming up hordes of campaign and super PAC cash, Bush failed to scare away the largest GOP field in recent history. Kasich's late-July entry was as vivid a demonstration as any that Bush's much-ballyhooed "shock-and-awe" strategy had failed: Even with a strikingly similar message of pragmatic conservatism, policy innovation, party inclusiveness, and swing state appeal, Kasich bet that Bush could still be beaten within the establishment lane.

That bet is looking, well, better and better. To be sure, Kasich's support in national polls remains modest: Real Clear Politics' polling average finds him in the middle of the pack at 3.5 percent -- although he's not far behind Bush, now in third place behind Trump and Carson and registering just 7.8 percent support. But the truly dire numbers, if you're a Bushie, are in New Hampshire, a state whose relatively moderate GOP primary electorate has been proven fertile ground for maverick Republicans in the mold of Kasich and John McCain.

For both Bush and Kasich, the stakes are steep. If Kasich can't gain traction in the Granite State, he's dead on arrival elsewhere. Meanwhile, anything less than a strong second- or third-place showing would likely prove crippling to Bush, who has focused intensively on the state.

So how is New Hampshire going for the two men? Well, neither man leads there -- that distinction belongs to a certain bigly classy businessman, who captures about a third of the vote in recent polls -- but the trend lines are unmistakable: Kasich's position in New Hampshire is far better than Bush's. According to Real Clear Politics' database, Kasich and Carson are currently duking it out for second place; Carson currently wins 11.5 percent of the vote to Kasich's 10.8 percent. Then comes ex-Hewlett Packard CEO Carly Fiorina, whose 7.8 percent is sufficient to knock Jeb into fifth place, with 7 percent. Though a mere 3.8 points separate Bush and Kasich, their trajectories of the two men are wildly divergent: Kasich has surged from just a percentage point or two before he formally launched his campaign less than two months ago, while Bush, who led modestly in the state prior to the Trump surge, has seen his support cut in half since his June kickoff.

Bush's financial and organizational resources aren't to be discounted, but Kasich shows every sign that he could hold his own against the Bush machine in New Hampshire. He's signed on Tom Rath, a former state attorney general and Mitt Romney backer regarded as one of the state's most influential Republicans, and he'll benefit from an open primary process that allows independents to vote in the GOP contest. While Kasich's record is firmly conservative on most issues, he is likely to do well among center-right voters and independents, having bucked right-wing orthodoxy by backing Medicaid expansion, sounding a tolerant note on marriage equality, and endorsing criminal justice reform. His crusade for a Balanced Budget Amendment to the U.S. Constitution, while grounded in economic quackery, could also appeal to libertarian-leaning New Hampshire Republicans.

Let's say, then, that Kasich outperforms Bush in New Hampshire -- as he's currently on track to do. Where does Bush go from there? He's almost certain to head into the Granite State after a dismal showing in Iowa, where he's now polling at just 5 percent, and he's also poorly positioned in South Carolina, the next state to vote after New Hampshire; the Palmetto State, which saved the campaign of Bush's brother in the 2000 GOP primary, is currently awarding him just 8.5 percent of the vote. Can Bush lose three states in a row and live to tell about it? It's not inconceivable, particularly when billionaire-funded super PACs can keep candidates afloat far longer than in the pre-Citizens United era, but if Bush finishes behind Kasich in New Hampshire, he's virtually certain to bleed center-right support -- and establishment cash. That's the point at which Bush's orbit enters full panic mode, as Kasich becomes better-positioned as the establishment-lane contender against Donald Trump, Ben Carson, Ted Cruz, or whomever else emerges from the evangelical and Tea Party lanes.

Kathyrn Wylde, president and CEO of the Partnership for New York City and whose views are a reliable gauge of the New York corporate community's sentiment, told Politico's Ben White: "[A] lot of these people thought Jeb Bush was a shoo-in and they are upset now because they have already thrown in with him and he is looking a little wilted.”

Wylde, referring to the business community's unease over Bush and disgust with Trump, identified Kasich as the obvious beneficiary, telling White, “Kasich is a true businessman in contrast to Trump. He is the businessman candidate and he’s pretty compelling in part because Jeb has taken such a beating. I've set up a meet-and-greet with Governor Kasich and I’ve already got a sellout crowd.”

These are ominous signs for Bush. It's one thing to be trailing Donald Trump, Ben Carson, and Carly Fiorina in early polls; Trump may yet fade, while Carson's thin knowledge of public policy and the inevitable focus on Fiorina's stormy HP tenure all but ensure they won't wear well. But an establishment candidate who already faces the enmity of a restive conservative base can't well afford to ooze moderates and elite donors. That's why things may be poised to get ugly between Bush and his former Lehman Brothers colleague.