Saint Ronald, meet The Donald: Trump makes Reagan look like a Republican In Name Only

As Trump takes the stage at Reagan's library for the second GOP debate, a look at how the men differ -- and don't 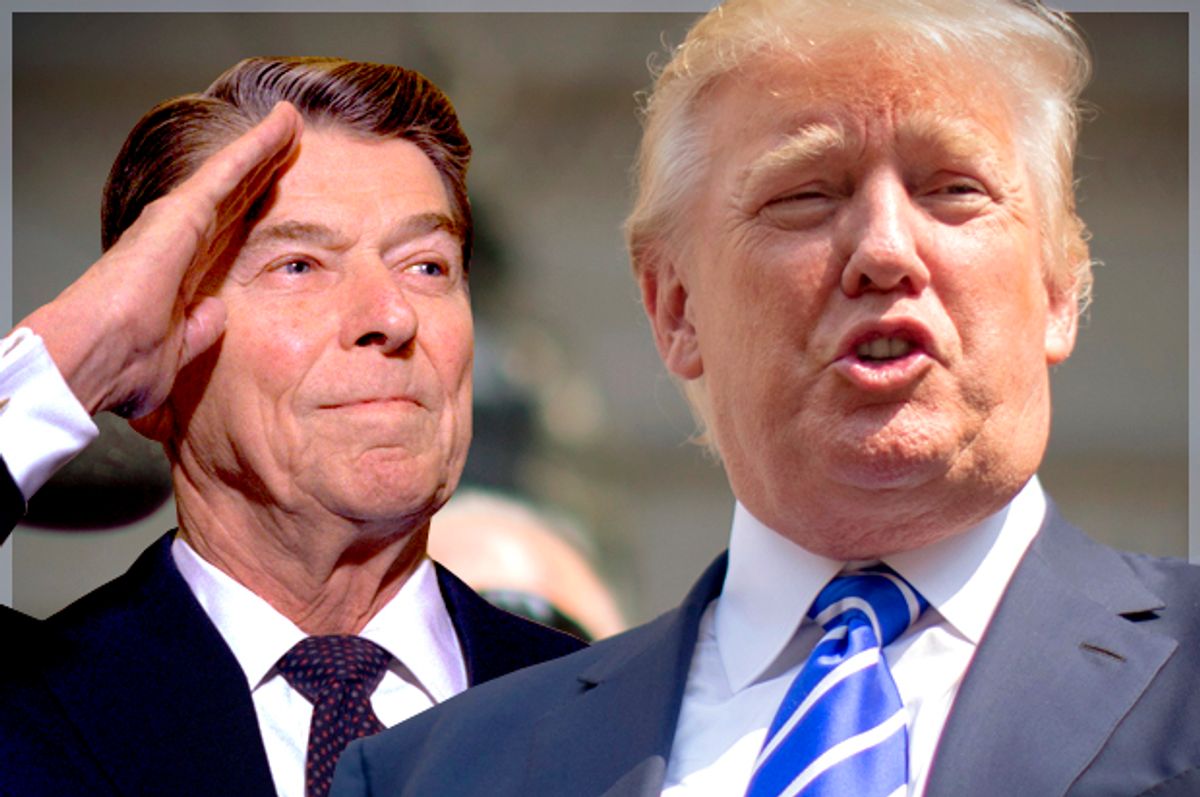 Fifteen Republicans -- asterisk Jim Gilmore wasn't invited, and Rick Perry's permanently back on his Texas ranch -- will converge on the Ronald Reagan Presidential Library in Simi Valley, California, for tonight's debate, in a quest to take back the White House after two terms of a Democratic administration. But on a host of issues, the loudmouth celebrity leading the pack parts ways with St. Ronnie -- illuminating the less-than-conventional conservatism of both Republican figureheads.

“He was a Democrat with a liberal bent, and he became a great conservative ... a great president, a great leader.... He had a great heart, and I have a great heart,” Donald Trump said of Reagan during a recent appearance on Fox News, in an attempt to shield himself from accusations that he is too liberal to win the Republican nomination.

But in his 1987 bestseller, "Art of the Deal," Trump blasted the conservative icon as an example of a con artist who couldn't “deliver the goods.” Because he was "so smooth and so effective a performer," Trump wrote of Reagan at the time, "only now, nearly seven years later, are people beginning to question whether there is anything beneath that smile."

However, never one to let a little contradiction stop him, Trump has gone on to use Reagan's famous "Make America Great Again" slogan as the backbone of his unlikely presidential campaign, although he recently failed to properly attribute the source: "The line of 'Make America great again,' the phrase, that was mine, I came up with it about a year ago, and I kept using it, and everybody's now using it, they are all loving it. I don’t know, I guess I should copyright it, maybe I have copyrighted it."

“Our country is going to hell,” Trump regularly claims while wearing a baseball cap emblazoned with the shared logo.

Besides being a divorced celebrity and strategically pandering to the racist sentiments of the GOP primary electorate, The Donald and The Gipper actually share few similarities more glaring than their willingness to drop their conservative principles under pressure. The truth is that insofar as conservatives consider Reagan’s presidency as a success, it was precisely because he was willing to accept policies that flew in the face of his conservative principles:

"I believe in the idea of amnesty for those who have put down roots and lived here, even though sometime back they may have entered illegally" - Ronald Reagan at a 1984 presidential debate.

By 1986, Reagan had signed the Immigration Reform and Control Act, granting amnesty to 2.7 million undocumented immigrants who had arrived in the U.S. before 1982.

Trump, on the other hand, has infamously built his entire campaign platform around nativist, anti-immigration rhetoric, slurring Mexican immigrants as "rapists" and "criminals" during his campaign kickoff and promising to oversee the mass deportation of more than 11 million undocumented immigrants in "18 months to two years."

"I’ve spoken of the shining city all my political life," Reagan famously said of America during his 1989 farewell address, describing the nation as "a tall, proud city built on rocks stronger than oceans. And, if there had to be city walls, the walls had doors and the doors were open to anyone with the will and the heart to get here."

Trump, however, has promised to complete a massive wall along the U.S.-Mexico border and advocates for the repeal of the 14th Amendment in order to prevent the children of undocumented immigrants born in the United States from garnering birthright citizenship. Trump, and several of his Republican rivals, demeaningly refer to such children as "anchor babies" on the campaign trail.

But while Reagan's immigration policies were considerably to the left of Trump's, his record on race and ethnicity is far from untarnished. During his 1980 campaign,  for instance, Reagan famously traveled to the Neshoba County Fair, seven miles away from the town of Philadelphia, Mississippi, where three civil rights workers were murdered in 1964, to deliver a speech vilifying "cadillac driving welfare queens" and appealing to supporters of former segregationist Alabama Gov. George Wallace under the guise of "states' rights."

"I ask you to resist the attempts of those who would have you withhold your support for our efforts, this administration's efforts, to keep America strong and free, while we negotiate real and verifiable reductions in the world's nuclear arsenals and one day, with God's help, their total elimination." - Ronald Reagan in 1983 speaking of a nuclear nonproliferation agreement with the "Evil Empire" -- the Soviet Union.

Despite rising to national prominence as a deeply hawkish conservative darling with his 1964 speech on behalf of Barry Goldwater, Reagan eventually relaxed his extreme stance against the so-called evil empire, after initially escalating the Cold War soon after taking office.

“I think the deal is horrible,” Trump has repeatedly said of the historic international agreement to cease Iran's nuclear development capabilities. Trump also recently held a rally on the steps of the Capitol against the deal with the likes of Sarah Palin and Ted Cruz. “We also know the Persians are good negotiators, and frankly, I think the deal is terrible, and it’s certainly bad for Israel,” Trump has said, eschewing The Gipper's model of negotiation.

“Thou shalt not speak ill of a fellow Republican” -- Ronald Reagan during his 1966 campaign for California governor.

The so-called Republican 11th Commandment popularized by Reagan didn't come out of the goodness of the Gipper's heart, it was actually developed by California Republican Party Chairman Gaylord Parkinson as a calculated defense mechanism to the devastating attacks Reagan faced from fellow Republicans during that 1966 race. This, from a man who presented a challenge to sitting Republican president Gerald Ford in 1976.

During the last presidential debate, The Donald led a revolt against conservative darling and Fox News superstar Megyn Kelly after she dared to call him out on his history of sexist comments.  Trump has called his other Republican rivals “losers,” “morons,” “dummies” and “idiots,” and recently launched another sexist attack, this time aimed at the physical appearance of his Republican rival, Carly Fiorina.

If a conservatively flawed St. Ronnie can stand as the gold standard for today's Republican Party, surely its current standard bearer, Donald Trump, will eventually settle in just fine.