The long, slow death of an American newspaper: Inside the publishing tragedy of the Los Angeles Times 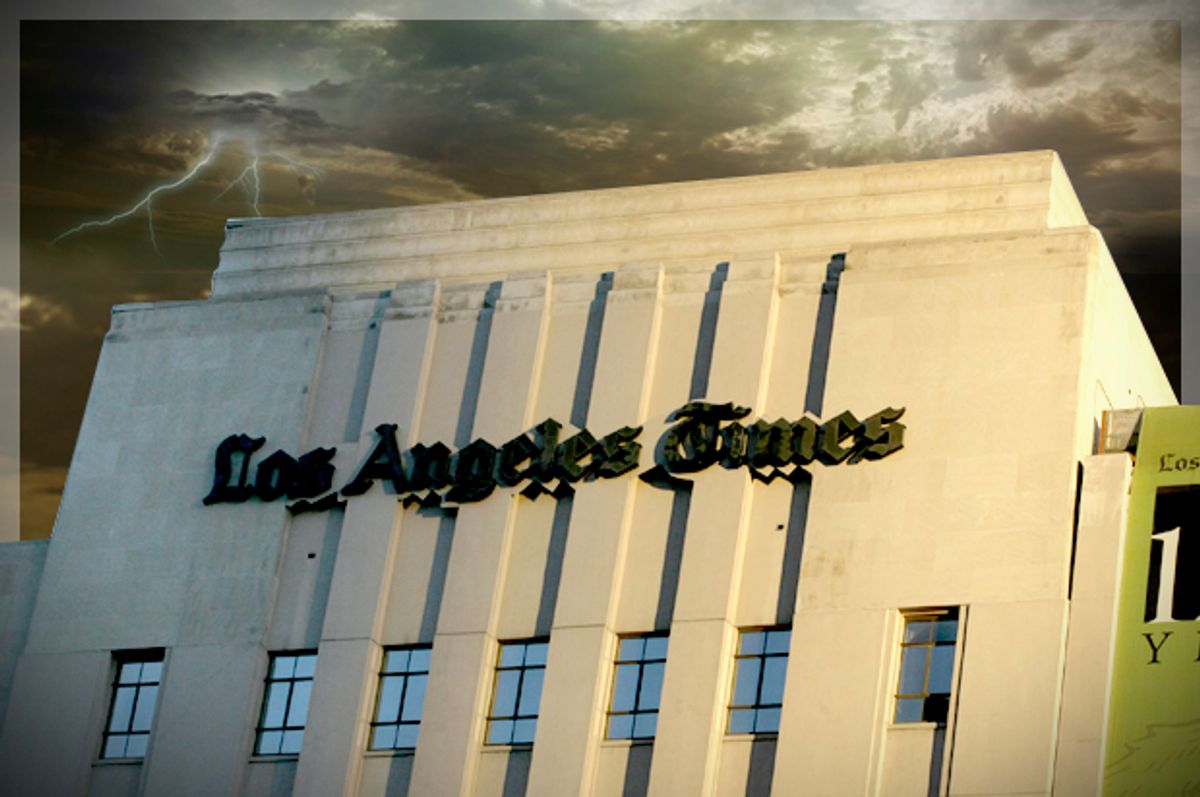 "Newspaper cutting jobs" is such a common story that it's barely newsworthy anymore, but newspapers still matter enough that it's worth paying attention when they get gutted by their owners. That's what's happening to the poor Los Angeles Times, which has endured enough misery over the past decade that you could write a tragic opera about it.

According to a report by Poynter's James Warren, Tribune Publishing, which owns the Times, Chicago Tribune, Baltimore Sun and several other papers, is about to enact a major new round of job cuts at the Times and elsewhere. This comes after Tribune CEO Jack Griffin fired Times publisher Austin Beutner over a variety of disagreements—chief among them Beutner's desire to take the Times out of Tribune, presumably in order to protect it from exactly the kind of cuts now being instituted.

It's just the latest chapter in what has become a very sorry history. Newspapers are in such dire straits these days that the competition for "most depressing company" is a fierce one, but Tribune is certainly in the running.

Back when newspapers were still seen as a viable business, Tribune bought the Times Mirror group from the Chandler family, which had turned the LA Times from a joke into one of the country's top papers, and added it to its own media holdings, which also included TV and radio stations. Tribune then set about systematically bleeding its new purchases dry. Multiple LA Times editors—including current New York Times chief Dean Baquet—left after refusing to assent to Tribune's aggressive demands for cuts.

Eventually, Tribune's shareholders decided that newspapers weren't so great after all, and the company was sold to Sam Zell, a real estate tycoon and candidate for the most awful person in the world. Zell's tenure took the notion of disasters to an entirely new level, sending Tribune plunging into bankruptcy, making even further job cuts and promoting an appalling workplace culture, one summed up by a legendary investigation into the company by the late David Carr:

Based on interviews with more than 20 employees and former employees of Tribune, [former Tribune CEO Randy] Michaels’s and his executives’ use of sexual innuendo, poisonous workplace banter and profane invective shocked and offended people throughout the company. Tribune Tower, the architectural symbol of the staid company, came to resemble a frat house, complete with poker parties, juke boxes and pervasive sex talk.

Charming, no? Zell eventually cut his losses, leaving a sort of smoking crater in his wake. A consortium of other rich people took Tribune off his hands, looked at the newspapers they'd just bought and wondered why they were even bothering. They spun Tribune's print division off into its own company, leaving it to slowly sink further into the sea. And that brings us to today.

I wish I could say that this story is terribly unique, but it's not. Newspapers are like a stabbing victim in a horror movie; it's a wonder that they're still staggering upright. The remorseless declines in advertising, circulation and staff continue.

Newspapers have now become the equivalent of charity cases, a prime target for billionaires looking to scratch a philanthropic itch and gain some local influence. It's no accident that Eli Broad, the same man who just opened a huge museum to house his art collection in Los Angeles, has also been trying to buy the Times for at least a decade. So far, Tribune hasn't wanted to let the paper go; Warren wrote that "from the larger company’s perspective, that would mean sharply diminishing the size of Tribune Publishing. It would thus mean that a lot of current corporate executive positions — some quite cushy — would disappear as Griffin’s domain would shrink considerably."

It would appear, then, that the LA Times is being held hostage by a company that won't give it the money it needs and won't let it get sold to someone who might actually want to invest in its operations. Just another great moment in the history of Tribune. Hopefully, for the sake of the many journalists who still work at the company's many papers, people who are less hostile to journalism will eventually take over—but "hope" and "newspapers" are two things that just don't seem to go together these days.