Huckabee & Santorum flunk their own religion: Inside the biblical verses that contradict Kim Davis 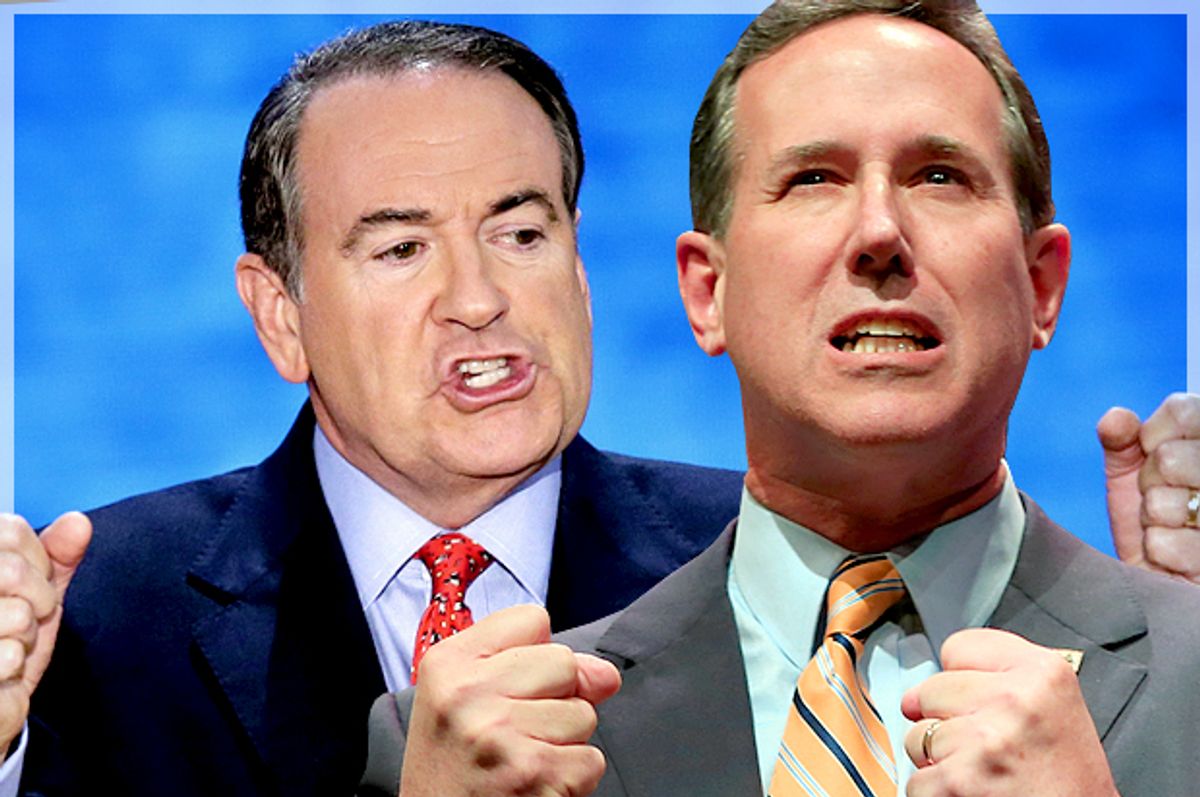 Kim Davis and her supporters, such as Mike Huckabee and Rick Santorum, don't seem to know much about the American legal system, and they don't know much about the real meaning of marriage. They also don't know much about Christianity. Of course, when Davis says that issuing a marriage license to gay couples violates "my faith," she might be defining faith in purely personal terms, and so might Huckabee and Santorum. But they all seem to be referring to Christianity. If they actually read the New Testament, however, instead of invoking Christianity as an excuse for discrimination, they would realize that it contains no prohibitions of the sort they claim.

The famous line that everyone knows appears in all three Synoptic Gospels, Matthew, Mark and Luke: "Render therefore unto Caesar the things which are Caesar's; and unto God the things that are God's." The context is that Jesus' enemies are trying to trap jim into making a statement that would oppose the legal requirement to pay taxes. Jesus asks them to show him the sort of coin that could be used to pay the tax, and the coin they produce naturally has the image of the Emperor (Tiberius) on it. In other words, since the money is issued by Caesar, it can be paid to Caesar.   There are various ways to interpret this account, of course, but the most natural interpretation is that a legal requirement, by itself, doesn't have religious significance.

Kim Davis isn't being asked to personally approve marriage licenses. She is being asked to issue a state marriage license to someone who has met the state's requirements for marriage. To use two more telling examples: People who are remarrying after a divorce are violating a Catholic clerk's principles, and Jews who get married without acknowledging the divinity of Christ are violating both a Catholic and a Protestant clerk's principles. Presumably, those clerks would refuse to officiate at religious ceremonies of divorcees or Jews. But that's not what they are being asked to do. They are being asked to issue a document created and defined by the government. The same applies to Kim Davis.

A somewhat less well-known part of the New Testament makes the point even more clearly, and extends it to bakers and caterers who have declared they won't provide their services to a same-sex couple. During the 1st century, Greek and Roman temples sacrificed animals to the gods. Not being fools, those in charge of these temples had decided that what the gods wanted was the nice white, glistening fat, not the brown bloody meat. So after they had burned the fat as a sacrifice, the temples wound up owning a lot of meat, which they typically served at ceremonies or sold in the market. Members of the church of Corinth, which was founded by St. Paul, write to him to ask whether Christians can purchase or eat meat from an animal that has been sacrificed to the pagan gods.

Paul begins by saying that there is nothing wrong with the meat that should stop a Christian from eating it. It has been sacrificed to an idol, but an idol is nothing, so the meat is just plain meat. The problem lies in appearances; a Christian who buys or eats the sacrificial meat may seem to be participating in a pagan ceremony, and that may confuse or weaken other Christians. Under those conditions, it is better to abstain.

Christians differ about whether same sex marriage violates the principles of their religion. But that doesn't matter, according to Paul, if they are simply doing business or providing government services to gay couples. What matters is whether one participates, or appears to participate, in the ceremony. If one doesn't appear to participate, then these activities are fine, whether the marriage violates Christian principles or not. So even attending the ceremony would be acceptable; in our society, people attend marriages of friends from different faiths all the time, and no one interprets their attendance as observance or belief. Business relations -- and government services -- are clearly outside Paul's prohibition. Does anyone think that a florist who provides decorations for a Jewish wedding has converted to Judaism? Does anyone think that firefighters who respond to a call from a Catholic Church are submitting themselves to the Pope?

In his response to the Corinthians, Paul is not only explaining Christian doctrine, but also providing good practical advice. The Roman Empire, like modern America, was a pluralist society, with dozens of different religions. People couldn't function within it if they could only deal with those who followed their own religious principles. Government and business would grind to a halt if every ordinary transaction was viewed as a test of faith.  The few people who felt that way during the early centuries of Christianity went off to live in the desert, but no major Christian leader thought such extreme behavior was required.

In short, Davis, Huckabee, Santorum and their allies aren't obeying Christian doctrine; they are using it as an excuse for bigotry. They are simply too narrow-minded to accept the fact that some people have preferences and commitments that are different from their own. Their claims of conscience are really excuses for mistreating other people, and, in the process, they are mistreating the Christian religion as well.