George Will sneers at the Pope: How his condescending takedown of Pope Francis' "fact-free flamboyance" misses the point 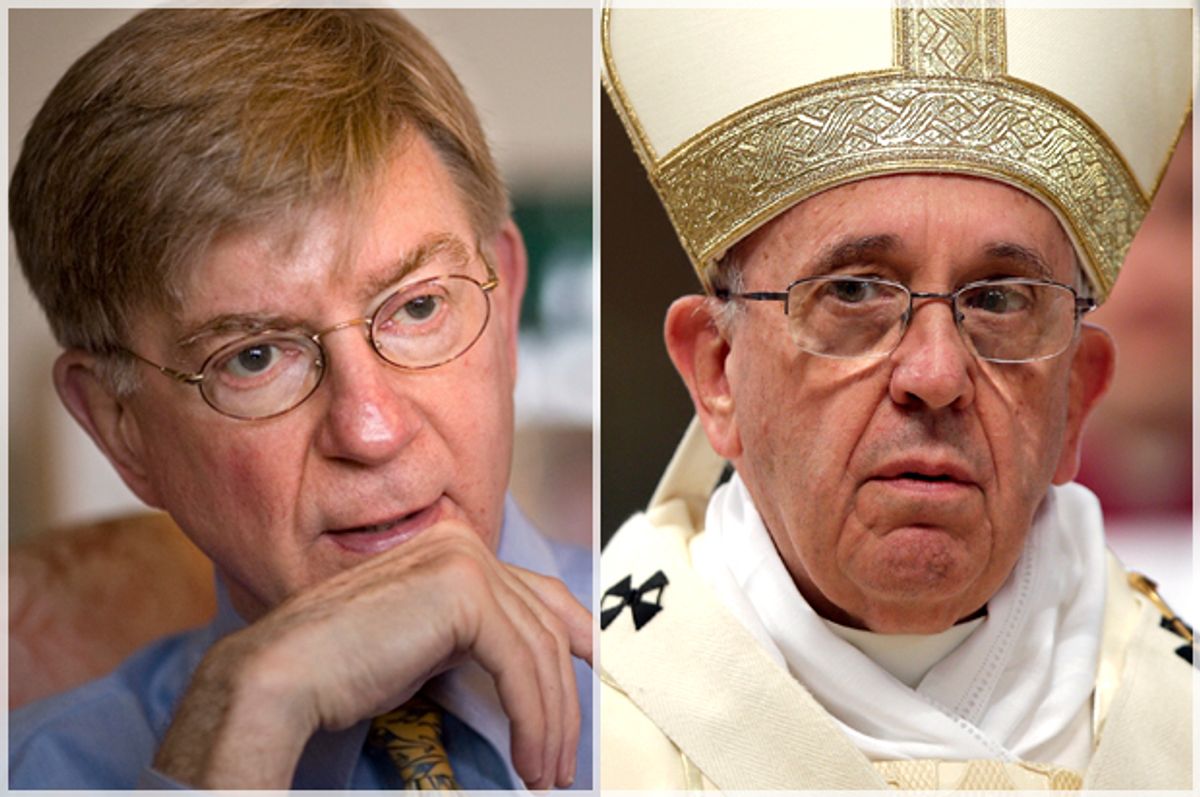 Even if you're not of a Christian or even religious bent, can we all agree that easily one of the best things about Pope Francis is how distressing he is to conservatives? Oh, sure, the right wing loves a pontiff when he's all up in that holding back women and gays business. But this Francis guy — he's pretty mouthy. And George Will for one is not pleased.

Will, the Pulitzer Prize-winning welfare scaremonger, climate change denier and person who thinks that college students come forward about sexual assault so they can enjoy a "coveted status that confers privileges," does not appear to be a fan of the 78 year-old leader of the Catholic church. In an op-ed this weekend about the pope's "Fact-Free Flamboyance," Will takes umbrage at him on the eve of his first official visit to the U.S., and he takes right it out of the gate. "Pope Francis embodies sanctity but comes trailing clouds of sanctimony," he writes in the first paragraph. "With a convert’s indiscriminate zeal, he embraces ideas impeccably fashionable, demonstrably false, and deeply reactionary." I'll give him this though — he also calls Francis "shrill," and it's so refreshing to see that word applied to a man for a change.

For starters, Will doesn't like the pope's strong stance on climate change. Earlier this year, the pontiff issued a bold encyclical in which he warned that our "reckless" disregard for the environment has pushed the earth to its "breaking point." But Will says, "He neglects what technology has accomplished regarding London's air (see Page 1 of Dickens’s 'Bleak House') and other matters." Good, I'm glad we're using Victorian fiction as a jumping off point for a serious conversation. Will is upset the pope "speaks as though everything about which he declaims is settled, from imperiled plankton to air conditioning" — but those issues actually are pretty well settled. Two years ago scientists warned of rising ocean temperatures and their drastic effect on "a critical link in the ocean food chain," and the increasing energy expenditure of air conditioning is a legitimate environmental risk.

But let's not continue to play along that Will's concerns are really about what he calls the papal "duty to be as intelligent as one can be." It's about his discomfort with a person of considerably more power and influence than George Will could ever dream of using that power for the purpose of speaking directly about social change. Will says that "Francis deplores 'compulsive consumerism,' a sin to which the 1.3 billion persons without even electricity can only aspire." Does he even understand that such a message is not aimed at the billions of our fellow citizens living in poverty but the rest of us whose consumption habits affect them? A small percentage of the world uses the bulk of its resources. That's the problem.

But Will goes for the throat, claiming, "As the world spurns his church’s teachings about abortion, contraception, divorce, same-sex marriage and other matters, Francis jauntily makes his church congruent with the secular religion of 'sustainability'…. He stands against modernity, rationality, science and, ultimately, the spontaneous creativity of open societies in which people and their desires are not problems but precious resources. Americans cannot simultaneously honor him and celebrate their nation’s premises.'"

It's a similar brand of outrage to the one Rick Santorum expressed this past summer, when he said, "The church has gotten it wrong a few times on science. And I think that we are probably better off leaving science to the scientists and focusing on what we're really good at, which is theology and morality." For the record, before entering the priesthood, the former Jorge Bergoglio studied chemistry at Escuela Técnica Industrial No. 12 and worked as a chemist.

It's true that the Catholic church's track record with science has not always been the greatest. But you don't have to be a fan of Francis now to agree with the 97 percent of climate scientists who concur that "Climate-warming trends over the past century are very likely due to human activities." You don't have to be Catholic to be deeply troubled by the terrible toll of the relentless cheap consumerism of the West and the serious environmental and human impact of our spending habits.

But here's another thought — what if you are, like me, Catholic? Am I presumed not to be incapable of "celebrating my nation's premises" — which, by the way, I don't believe include decimating the planet so I can crank up the AC — and having a spiritual leader at the same time? Will, who describes himself as an atheist, doesn't have to subscribe to my belief system. But I find it interesting when conservative guys like Will lose their minds over the idea of someone with a fair degree of authority on the subject of Catholicism — like, say, a pope — pointing out the actual stated values of one of the richest and most powerful religions in the world. Values that include, uh oh, charity, humility and non-materialism.

You can still take plenty of exception to the Catholic church's stances on numerous contemporary social issues. I sure do. But you cannot, with any kind of either intellectual or spiritual credibility, suggest that Pope Francis is off the mark with regard to sincere Christian values. That's what terrifies and enrages his critics so much. He's the religious leader who's calling upon his followers to really practice them.