Viola Davis, Uzo Aduba, Regina King and that Ava DuVernay-directed Apple commercial: We saw a hint of the future at the Emmy Awards, and it's glorious 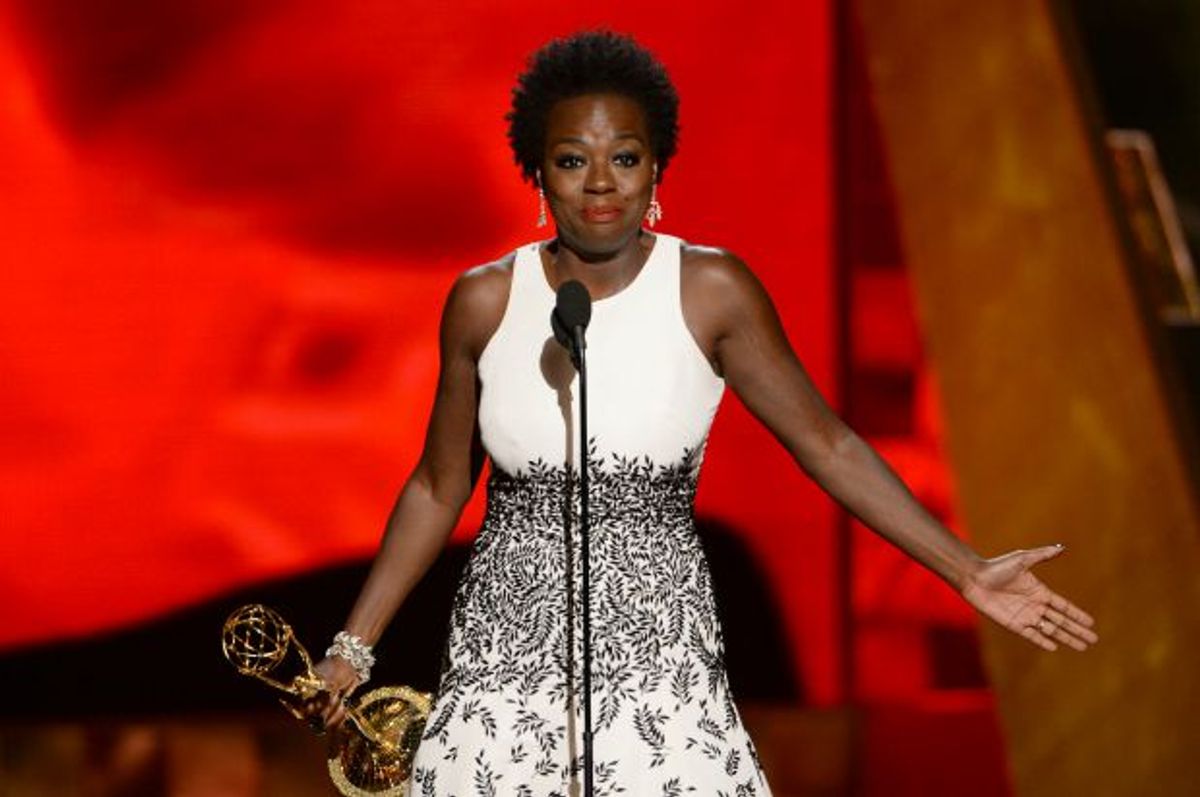 (Phil McCarten/Invision for the Television Academy)
--

One of the most memorable moments of last night’s Emmy Awards was not onstage at the Microsoft Theater in Downtown Los Angeles, or outside on the apparently sweltering and crowded red carpet. It was, instead, a commercial—a minute-long spot for the newly launched Apple Music. The ad played at least twice during the three-hour ceremony, and in the midst of phone commercials, credit card commercials, and even Jon Hamm’s voice selling us Mercedes-Benzes, it stood out. Partly that was because it starred Kerry Washington of “Scandal,” Taraji P. Henson of “Empire” and R&B superstar Mary J. Blige—three recognizable faces. Partly, though, the ad appealed because these weren’t just famous faces, they were spirited, charismatic personalities. It offered a glimpse of the three of them laughing, talking, and sharing music in what seemed like the most natural mode for them all possible—one can only assume that they really are friends, that they really do love music, that they really all laugh like that. It was carefree; the effortlessness and grace of the scene were as much on sale in that advertisement as Apple Music. And the fact that it had such a memorable, arresting quality was no accident: The spot was directed by Ava DuVernay, the celebrated director of “Selma” who was noticeably snubbed by the Oscar nominations earlier this year.

If there was a single takeaway from the night, it is that black women are being supported on television right now in a way that they aren't in cinema. A record three black women won Emmys last night: Viola Davis, for lead dramatic actress in “How to Get Away With Murder”; Uzo Aduba, for supporting dramatic actress in “Orange Is the New Black”; and Regina King, for supporting actress in the miniseries “American Crime.” Davis and King are industry veterans—Davis has been twice nominated for an Oscar, and King has worked as a performer since she was a teenager. Despite both being in the industry for decades, this is the first major screen award for both women (Davis is a two-time Tony Award winner). Furthermore, Davis is the first black woman to win lead actress in a drama, ever; her speech was one of the most emotional moments of the night. As she observed, what made this win possible for her was an industry that created roles for her—such as Shonda Rhimes and Peter Nowalk, the executive producer and showrunner behind “How to Get Away With Murder.”

What is astonishing—near-revolutionary, in fact, given the painful #OscarsSoWhite film awards we saw earlier this year—is that Davis was not the only black woman nominated in her category, and neither was King. Henson, who was also in the Apple ad, was nominated alongside Davis for her starring role in “Empire” (and gave Davis a congratulatory hug and a standing ovation). Hip-hop star Queen Latifah and the legendary Angela Bassett were nominated in the "limited series or movie" category along with King. Washington wasn’t nominated, but she was sitting in the front row, sobbing; “Scandal,” when it debuted, was the first network drama with a black female lead in almost 40 years. Tracee Ellis Ross presented onstage with her screen-husband from “black-ish,” Anthony Anderson. And Blige—along with Latifah and Aduba—will be in NBC’s live production of “The Wiz!” airing in December. Davis, King, and Aduba weren’t tokens; they were part of a larger ecosystem of representation. And similarly, Washington, Henson, and Blige weren’t just in an advertisement. With DuVernay behind the camera, they were offering up an alternate, or maybe future, reality—one where it isn’t shocking or surprising or even noteworthy to see three women of color having a good time while another woman of color directs from behind the scenes.

Last night’s Emmys were one of the most memorable awards shows in my memory. There was an ease to it, managed with characteristic charm by host Andy Samberg. The job of hosting an awards show is often quite thankless—the format and the crowd are constraining, and because it’s live, there is always some awkwardness. Samberg displayed a light heart and level head throughout the affair, radiating “mensch” without seeming too smarmy about it. He did stumble a bit in the opening monologue, primarily because the audience wasn’t really having it—when he poked fun at the industry, the crowd of well-heeled Hollywood insiders couldn’t quite take it. Samberg thankfully doesn’t have the temperament for mean-spirited comedy, so he just skimmed past their discomfort and into the safer realm of broad political humor and song-and-dance comedy. (It might have made for an edgier evening if he’d pushed his audience harder, but who wants to watch an edgy awards show?)

The crucial thing that Samberg and his team—the writers from IFC’s cult hit, “Comedy Bang! Bang!”—brought to the affair was a sense of fun. Yes, the awards might be political, biased, or even unearned. But television is having a ball, and more people than ever are invited to the party. Samberg’s jokes about other shows were as much about enjoying their peculiar excellence as it was teasing those involved; one of the first jokes all night was Samberg running into Nathan Fillion and explaining that he had watched every single show ever made except for Fillion’s long-running (and critically ignored) “Castle.” The self-seriousness about themes and characters that so often drags down the Oscars was entirely absent from the Emmys; relatedly, I think, the production actually ended early, with two minutes to go before 11 p.m.

The heaviest part of the broadcast was the part HBO is probably still celebrating, even at this hour—the heaps of awards for the network’s “Veep,” “Olive Kitteridge,” and “Game Of Thrones.” HBO swept all three categories, which is both surprising and a kind of telling phenomenon. (There’s more TV than ever, but maybe viewers stick with brands they know; conversely, maybe HBO is just very, very good at reaching Emmy voters. Conversely-conversely, maybe Emmy voters only watched “Olive Kitteridge.”) None of those programs are undeserving, but those statue-grabs were less energetic than the rest of the evening, partly because so many different shows were eventually honored.

“Modern Family” has had a stranglehold on the comedy categories for years, but they were shut out this year to make room for worthies like “Inside Amy Schumer” and “Transparent,” in what is arguably the best era for television comedy, ever. “American Crime,” “The Voice,” “How to Get Away With Murder” and “Mom” represented the innovation and resilience of broadcast networks. And “Mad Men,” in its final season, finally won an acting award—for Jon Hamm as Don Draper, an award a very long time coming for a very deserving actor. And in what was a canny touch, the awards broadcast featured a lot of clips from nominated shows as the intros and outros to commercial break, which offered both a taste of shows you might not have seen and a fond memory of shows you were hoping would be recognized. It meant that even shows that didn’t win felt suitably recognized—Amy Poehler was so present during the ceremony it would be possible to overlook that she didn’t win for the final season of “Parks and Recreation.”

“Veep’s" sweep was a reminder of the contradictions at the heart of the entertainment industry. While the Hollywood establishment is unabashedly (and at times irritatingly) down-the-line liberal, when it comes to their own industry, they find it harder to be progressive. “Veep” is a brilliant and wonderful show, but much of the reason it’s a hit with Emmy voters is because it’s cynical about politics and lampoons politicians, taking specific pains to dissect the idiocy of the American system of government. It’s harder to take a joke when it’s directed at yourself, of course, but even Samberg’s delicate little quips about the wage and age gap for women in the industry seemed to be too much to handle.

It comes back to Washington, Henson, and Blige, chatting so easily; it comes back to Davis and Henson having a moment in the aisle, to Aduba’s impassioned speech, and even to the colorful, breezy dress of “Orange Is the New Black’s" Danielle Brooks, on the red carpet. TV found it easier than ever in this awards season to enjoy the fun of it all, and much of that has to do with making space for creation and expression and representation instead of keeping the awards, the money, and the prestige concentrated at the very, very top. It’s no surprise that this lighthearted broadcast was on Fox—the network has made a major push for diversity, and all of its shows, from “Empire” to “New Girl,” emphasize a certain amount of campy or screwy fun.

The Apple Music ad made me think of a movement (and hashtag) called “carefree black girls.” It’s assigned to images or other media of black girls and women in situations of unfettered enjoyment, whether that’s a group of young women looking fabulous and laughing or best friends eating ice cream or a toddler with a huge smile and bows in her hair or Solange Knowles riding a yellow bicycle. Even as a non-black woman, I take a lot of comfort in these images, because they’re so free from concern, struggle, or doubt. I found some of that same lightness in yesterday’s broadcast. And though it may be only a dream of carefree, right now, television is the right place to construct our beautiful little fantasies.