Conservatives who hate the pope rush to his defense: White House's papal guest list like "an open bar at Alcoholics Anonymous meeting"

Megyn Kelly and Mike Huckabee make it seem like the pope will personally greet all 15,000 guests on the list 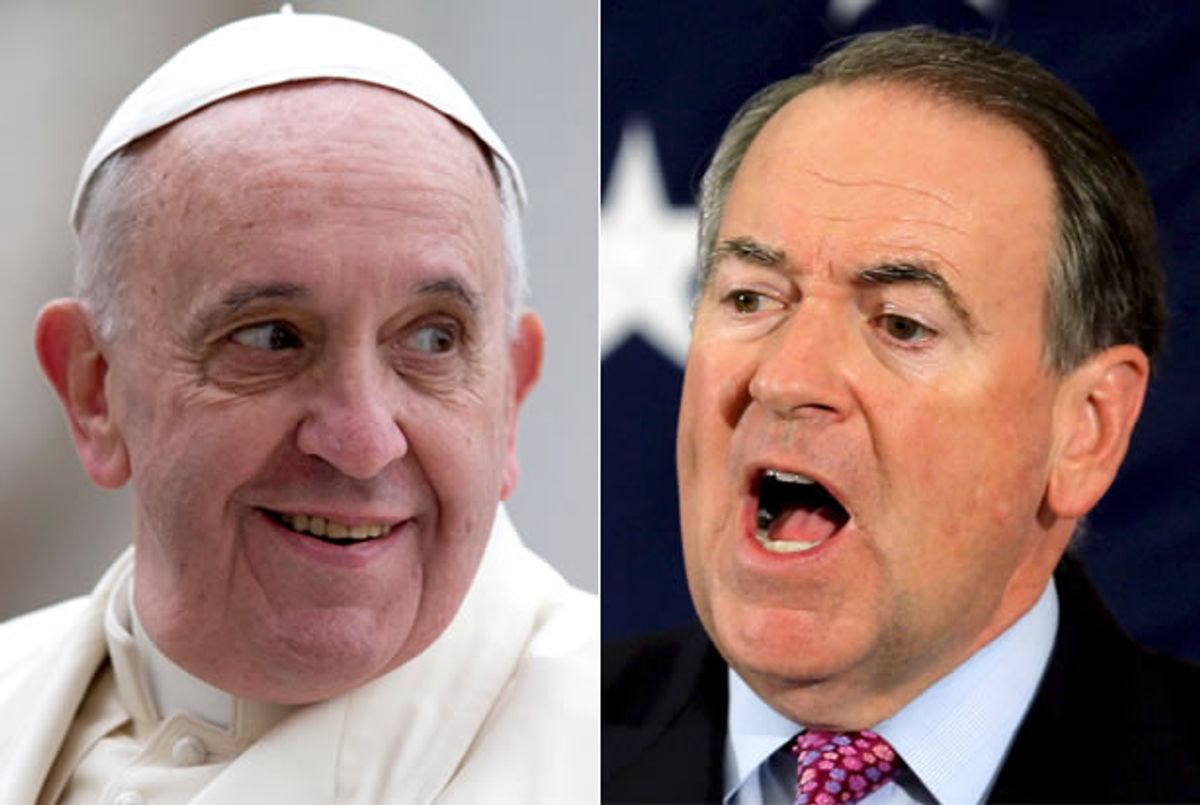 Conservatives are incensed that a "rogue's gallery" of LGBTQ-friendly Catholics were included among the 15,000 people invited to greet Pope Francis on the White House Lawn Wednesday, and on "The Kelly File" Monday night, GOP presidential hopeful Mike Huckabee compared those invitations to having an open bar at an Alcoholics Anonymous meeting.

Kelly did not specify how many people would be attending the welcoming ceremony, creating the impression that the first openly gay Episcopalian Bishop, Gene Robinson, would be standing alongside President Barack Obama as he greeted the pope. So too would Sister Simone Campbell, the executive director of NETWORK, and Aaron Ledesma, a 23-year-old gay Catholic who returned to the flock after hearing Pope Francis preach a gospel of inclusivity.

While conservatives are clearly upset that -- in their eyes -- the Obama administration is deliberately insulting the pope, the Vatican itself declined to comment on the guest list for his welcoming ceremony. These conservatives seem to be taking offense on Pope Francis' behalf, even though it is unclear whether the pope himself would find the invitations worthy of offense. Given how low the pope currently ranks in conservatives' estimation, it's unclear why they're even taking offense -- political calculation notwithstanding, of course.

And so it went on "The Kelly File," where former Arkansas Gov. Mike Huckabee said that he's not happy with that guest list. "Megyn," he said, "if I were setting up a group of Alcoholics Anonymous, I wouldn't set up an open bar. For heaven's sake, bring the best and most faithful Catholics you can -- people who would give their right arm to meet his holiness.

"I'm not sure whether inviting people who are at odds with the Vatican, who have criticized the pope or his positions on abortion and euthanasia, why put them into the very likely position of photographing with him and make it a very embarrassing moment," Huckabee continued. Of course, it's not "very likely" that this "rogue's gallery" would be photographed with the pope, as they are but three out of nearly 15,000 invitees, but that simple fact doesn't suit Fox News' narrative, so to the wayside it goes.

Kelly asked whether the Obama administration considered this welcoming "an opportunity to expose the pope and those around him to another point of view," to which Huckabee replied that he hopes not. "I'm not sure President Obama is supposed to lecture the pope on Catholic doctrine and why he's wrong," he said. "Last I checked, the pope was supposed to lecture Christians, not the other way around." Huckabee neglected to mention that fellow GOP presidential hopeful Rick Santorum -- an actual, practicing Catholic -- has done this throughout his campaign for the White House.

"Unless Obama's decided he has a better understanding of theology than the pope himself," Huckabee concluded, "and boy, for a long time we've thought Obama's had a very high opinion of himself -- but this would really take it to a whole new level."