"Martin Shkreli is the Donald Trump of drug development": Why even a biotech exec agrees Turing's pill price-gouging is "even skeevier than you think"

Raising the price of a drug 5000 percent may be legal, but it's wrong 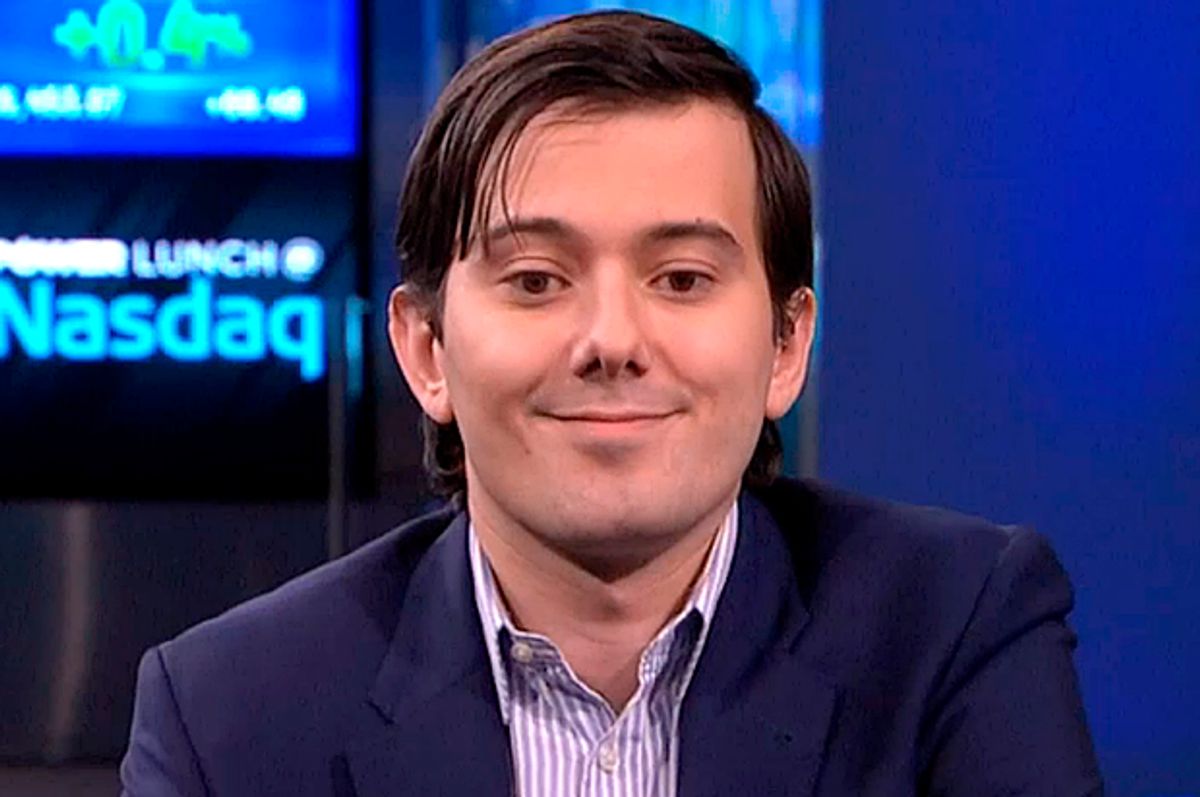 Frank — a chief scientific officer at a biotech company (and whose name has been changed to protect his and his family's privacy) — is talking to me Tuesday morning, en route to a series of meetings at MD Anderson, about the controversial 32-year-old CEO of Turing Pharmaceuticals and the company's recent headline-making decision to raise the price of toxoplasmosis drug Daraprim from $13.50 a pill to $750 — an increase of 5,455 percent. A New York Times story earlier this week by Andrew Pollack on Turing — which acquired Daraprim just last month — quickly drew horrified reactions on social media, including a response from Hillary Clinton, who said, "Price gouging like this in the specialty drug market is outrageous. Tomorrow I'll lay out a plan to take it on."

Earlier this month, the Infectious Diseases Society of America sent Turing a letter saying, "The Centers for Disease Control and Prevention has identified toxoplasmosis as one of five neglected parasitic diseases targeted for public health action because of the number of people infected, the severity of the illness and the ability for the condition to be treated," and adding, "This cost is unjustifiable for the medically vulnerable patient population in need of this medication and unsustainable for the health care system."

Speaking with CBS News Monday, Shkreli, whose former company ousted and then sued him for $65 million and whose Twitter feed certainly is chock-full of proud displays of his apparent wealth — defended the move, saying that "The drug was unprofitable at the former price, so any company selling it would be losing money. At this price it's a reasonable profit. Not excessive at all…. And with these new profits we can spend all of that upside on these patients who sorely need a new drug, in my opinion."

Neither my pal Frank nor I is unsympathetic to the drug industry, or unbiased about it. He makes his living in the development of medicines, and I owe my life to them. Four years ago, facing a rapidly fatal form of cancer, I entered the first cohort of a Phase 1 Bristol Meyers Squibb clinical trial that saved my life. (Because it was a trial, BMS paid for the treatment.) From our unique perches, Frank and I have seen firsthand the years of effort and disappointment that go into research and development of potentially lifesaving drugs. So if you're the sort of person who likes to say the pharmaceutical industry is just plain evil, I'll be over here with my friend who's dedicated his life to science, and enjoying my healthy, vaccinated children and my not being dead of cancer. And I mention this because when people like Frank and I stand here agape at what Martin Shkreli and Turing are doing, we are watching this fiasco from the perspective of two people who are all for the business of medicine.

As Frank explains it, "I'm not a pricing expert. When I first entered the business I thought a bunch of guys would sit around in a room and whoever could say the highest number without giggling would set the price." But Shkreli, he says, "This is a guy who genuinely doesn't give a s__t."

My doctors started research on what would eventually become my own drug combination — Yervoy and Nivolumab — back in the '90s. That work does not come cheap. Earlier this year, doctors from my hospital spoke at American Society of Clinical Oncology annual meeting about the "unsustainable" cost of of treatment, noting my own drug regimen now runs "approximately 4,000 times the cost of gold."

As Frank puts it, "It's really expensive to develop drugs. It's complex and highly regulated. Almost nothing we do in the industry works. Even if projects enter clinic, 95 percent of them fail in clinical trials. Drugs aren't necessarily expensive because we're greedy; they're expensive because we're fighting with one hand behind our backs. It's hard enough to make a drug that cures a mouse, let alone a human. The costs of all those failures have to ride on the backs of those drugs that are successful."

But what Frank says Shkreli is doing is different. "I strongly suspect what he did was even skeevier than you think," Frank says. "It's a kind of evil genius. I can buy a drug [like Daraprim] that should be generic, except the price is so low no one wants to compete with it. Now I put it on a marketing plan that is closed distribution. Then I raise the price 5,000 percent. That's what prevents anyone from jumping in, by throwing up a pretty big roadblock in their path. In one sense it may be legal, but it's not right."

I get it that medicine isn't free. But Frank says, "The thing that's infuriating is that this is exactly what people say about my industry that leads to them doing things like not vaccinating their children. But I work in an industry that is mostly driven by geeks and nerds. Hell, I wish I made as much money as a hedge fund manager. The challenge of capitalism is that there will always be people who place profit motive above ethical concerns. It's unconscionable. Reprehensible. You can't get me to say enough bad things about it."