Scott Walker's glorious fall: How the man who couldn't lose lost very badly -- and what it could mean for Marco Rubio

The GOP's union-busting dream candidate hits bottom and drops out. Does Marco Rubio profit from his demise? 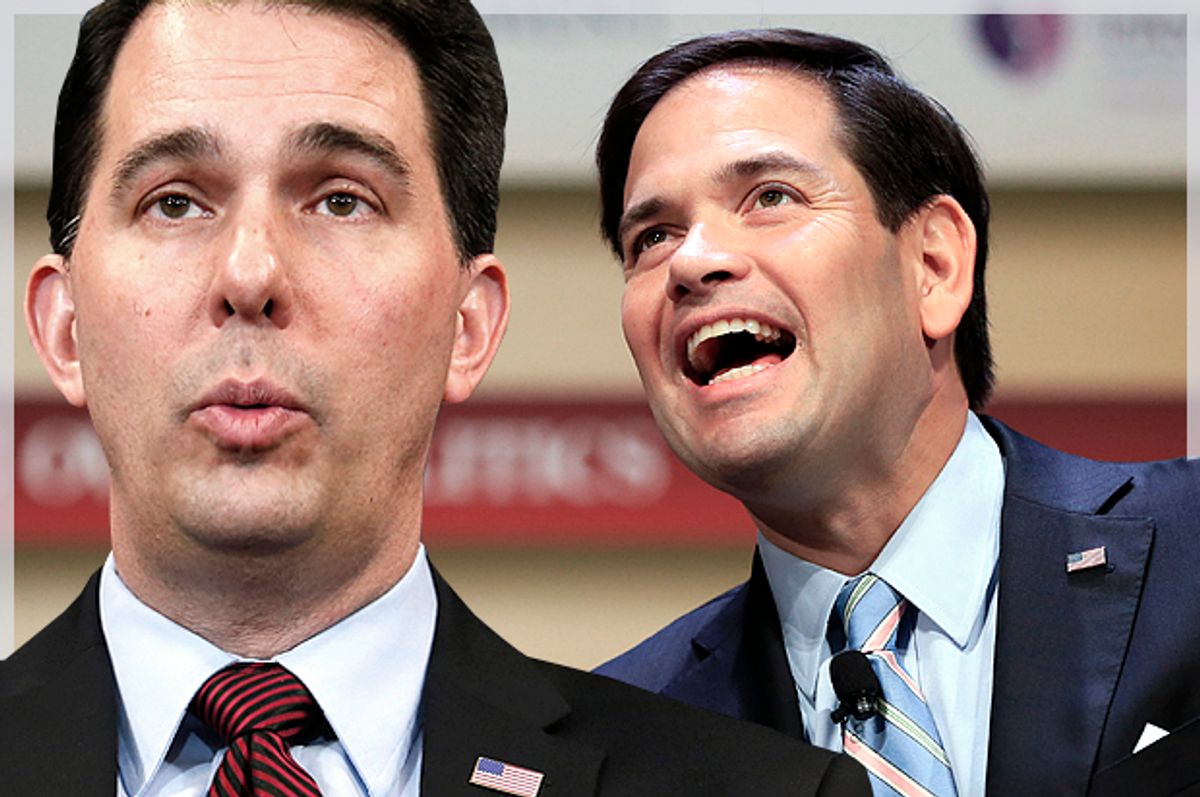 Wisconsin governor and CPR practice mannequin Scott Walker quit the 2016 presidential race yesterday, completing one of the quickest and most thoroughly satisfying political collapses in recent memory. For months, Walker was the odds-on favorite to snag the Republican nomination: a hardline conservative who specialized in beating up liberals and ramming through right-wing policy items. Then he actually started campaigning and voters came to recognize him as an aimless, groundless, personality-deficient weirdo who clearly hadn’t put any real thought into why he was running for president.

After somnambulating through two debates and reversing himself (often several times) on just about every issue Republicans care about, Walker saw his national and state-level polling crater to the point that he was pulling in less support than loathsome cranks like Rick Santorum. He presented himself as the ultimate outsider, only to be upstaged by candidates who’d never held elected office. And so just days after debuting his new personality as a candidate who will personally “wreak havoc” on Washington and never give up the fight, Scott Walker gave up the fight.

In folding his campaign, Walker offered himself as a sort of Sydney Carton, nobly sacrificing his political life so that someone just like him might have a chance at succeeding in the Republican primary. “Today, I believe that I am being called to lead by helping to clear the field in this race so that a positive, conservative message can rise to the top of the field,” Walker said. How very selfless! The reality was that Walker was out of money and out of options. He had set up a sprawling (and expensive) campaign as a show of frontrunner dominance, but his awful performance on the trail scared off donors, making it impossible to sustain the operation.

It’s possible that Walker could have drastically cut staff and limped along to the Iowa caucuses like so many fallen frontrunners have done before him, but he’d demonstrated no ability to win Republican voters to his cause, and being forced to quit after a sixth-place finish in Iowa would have made him look worse than he does now. So really, his decision to fold now was the smartest thing he’s done all cycle. Congrats, governor! You finished strong, relatively speaking.

The question now is whose campaign will be nourished by the rotting detritus of Walker 2016. He’d already lost pretty much all his support in the polls, but there are a whole host of “invisible primary” assets – billionaire donors, strategists, staffers, local officials, etc. – who are now free to sign on with other campaigns. The emerging consensus seems to be that Marco Rubio is poised to have his big moment, and that Walker’s demise will benefit the Florida Republican the most, as he offers the same mix of establishment credibility and conservative bona fides that Walker once enjoyed.

Eh, perhaps. If Rubio is about to have his moment, it’s because he’s been smart enough to keep his head down while all the other establishment candidates have made fools of themselves trying to figure out what to do with Donald Trump. But as Josh Marshall notes, “not looking like an idiot” isn’t the same as “being a strong candidate.”

He's far from on fire. But he's undamaged while his real opponents are either imploding or fizzling. The visuals and numbers show little reason for optimism. But I suspect they believe the structural logic of the contest is encouraging for Rubio and that time is on his side.

So Rubio may pick up a few billionaires and New Hampshire co-chairs, but he’ll also have one less stumbling nincompoop sucking up all the media scrutiny and one less decoy drawing fire from the aggressively anti-establishment, anti-“career politician” conservative base.

Whatever happens, we don’t have Scott Walker to kick around anymore, which is sad for political journalists but ultimately good for America.