"Muppet" fedoras and hipster racism on "Scream Queens": What last night's premieres say about the perils of pushing the envelope

Ryan Murphy gets desperate for attention; "The Muppets" have just enough self-awareness to become a better show 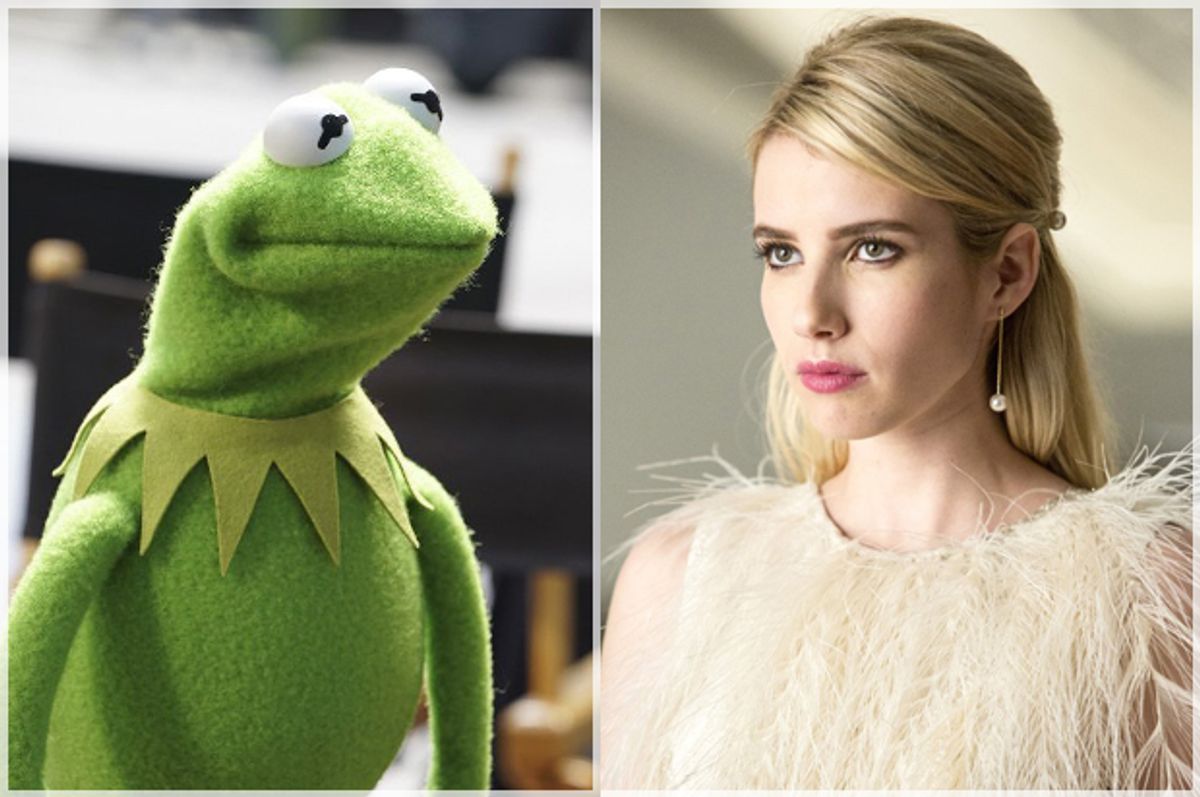 “Mammy” is one of the most enduring racialized caricatures in American history—still conjured up by Aunt Jemima, “Gone With The Wind,” and most recently, “The Help.” It refers to an older domestic servant who is a black woman, because so many white people, well into the ‘60s, had a black woman around to call the help. “Scream Queens” isn’t trying to be racist or demeaning—it’s being fake-racist, as a way to be funny. It fails. You could track when people were watching “Scream Queens” by when they tweeted out “white mammy?” in varying stages of confusion and anger.

There’s the issue at hand of how entirely unearned it is for a white man (showrunner Ryan Murphy), a white actress (Roberts), and a white maid (Jan Hoag) to toss around such a loaded phrase. That will be better discussed by someone else. What struck me was the desperation of calling upon unabashed fake-racism to sound smart or funny or interesting—witty or cool, at essentially any cost.

“The Muppets,” which also debuted last night, is geared towards those members of the viewing audience who think that Kermit the Frog having a sex life is inherently funny. It’s inherently something, for sure, but I don’t think we’re all going to be able to agree on it with laughter. That’s fine—plenty of sitcoms have a niche sense of humor—but it might not be what ABC was hoping for with “The Muppets,” its much-advertised new sitcom that debuted last night. The show was developed by Bill Prady, who in addition to starting his career with the Jim Henson creative team has executive produced generic sitcoms like “Dharma And Greg,” “Caroline In The City,” and, currently, “The Big Bang Theory.” Naturally, the combination of long-running, low-investment comedy and a wildly beloved childhood institution must have made dollar signs light up in the eyes of ABC executives. (Just to seal the deal, ABC appears to have molded the show to be a pitch perfect puppet-rendition of its Emmy-winning hit, “Modern Family.”)

But “The Muppets” isn’t really the Muppets, except in sad facsimile. Normally, I’d argue that an adaptation might deserve the benefit of fresh eyes. But in this case, the humor of “The Muppets” depends entirely on our pre-existing notions of the Muppets. Kermit calmly declares that he’s “attracted to pigs”; Fozzie is mildly homophobic; Miss Piggy flashes cleavage. It’s grown up, but without any discernible payoff, except titillation; it’s difficult to find the warm-hearted but wry humor that made the Muppets into a national institution. To paraphrase my former colleague Zack Handlen, the show both wants to inflate the Muppets’ perceived importance through nostalgia and then to poke holes in that same nostalgia—a strategy has determined not just the show’s plot but also its incredibly irritating advertising campaign. The Muppets are for kids, you see, but they’re also adults. They have relationship trouble. They have irritating employers. One of them is even an alcoholic.

“The Muppets” brings us to the behind-the-scenes drama of “Up Late With Miss Piggy,” a late-night talk show hosted by Piggy and run, behind the scenes, by her very recently ex-boyfriend Kermit. The style of the show is classic “Modern Family”—part unexplained mockumentary, part perpetually dissatisfied protagonists. Like “Modern Family,” too, the jokes are mostly there to emphasize how (modern or Muppet) life makes fools of us all; from Kermit’s new girlfriend Denise, a near-copy of Piggy, to Fozzie’s loser nice-guy dickishness, set off by a tiny fedora. Miss Piggy suffers most from the modernization: She has always been written as a histrionic narcissist, and that doesn’t leave a lot of room for nuances of character. “The Muppets” struggles to make her relatable, even as it toys with Kermit’s un-relatability.

Interestingly, the character that has managed to survive being modernized is Gonzo, and that’s largely because he’s stayed himself—a wise-cracking marginal character with occasional chances to steal the scene. His pitch to Kermit for how to incorporate “Dancing With The Stars” host Tom Bergeron into the show—“Dancing With The Czars”—is the only gag in the broadcast that made me laugh. Well, that and the moment when Kermit admitted baldfaced (toadfaced?) to the camera that his relationship with new piggirlfriend Denise began at a “cross-promotional synergy meeting.” Bergeron and Elizabeth Banks, a frequent guest on “Modern Family,” were certainly feeling that synergy. And Kermit’s new relationship is essentially the premise of the show—meaning it could be that “The Muppets” is showing some signs of self-awareness.

If “Scream Queens” is any indication, self-awareness is a good virtue to practice.